RANCHO MIRAGE, Calif. — She's racked up more than 20 speeding tickets in her life. She had dinner in Monaco with Jay-Z and Beyonce at a cliff-side restaurant with a retractable roof. And she's the only woman ever to lead both the Indy 500 and Daytona 500.

As you can tell, it was a wide-ranging and spirited interview with auto racing barrier-breaker Danica Patrick on Tuesday evening as the Rancho Mirage Speaker Series kicked off its Legends of Sports series in front of a full house at The Helene Galen Auditorium on the campus of Eisenhower Medical Center.

Patrick was interviewed by journalist Leighton Ginn as the two sat in front of a captive audience and wove their way through her life from the first day she got into a go-kart, to her racing career, to her rise in popularity, to her post-racing life.

She was engaging and honest about the arc of her life and her career. She explained that she left her Wisconsin home and moved to England to race when she was 16. She wanted to see the world and do things on her own. She admitted that it did not go great over there and to deal with some of life's harsh realities she become sort of a cold and closed off person during that stretch. A stark contrast to the effusive, funny and comfortable-in-front-of-a-crowd person she proved to be Tuesday. 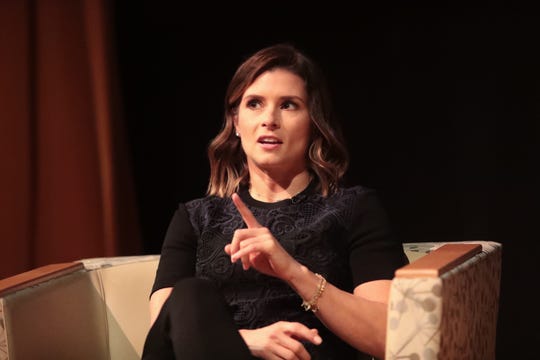 It was not a perfect couple years in her life, but it did open some racing doors and for that she was grateful. In fact, her first big racing breakthrough came from a meeting at a fancy restaurant over there — TGI Fridays.

"It was worth it and there's pricing to pay and costs for everything, but as far as a racing career goes being there I met a guy named Bobby Rahal (an IndyCar racer). He was in England running a Formula One team, and I didn't know hardly any Americans, and I lived in the same town as him and so we met up for lunch at get this, a TGI Fridays," she said, to a loud laugh from the full auditorium. "I'm sure I got the potato skins. We became friends and when he came back to the states, he ended up giving me a ride on his team and that is really the biggest reason why (the three difficult years she spent in England) was worth it. It was a great life experience and traveling the world helps you mature."

That was the foot in the race car door that Patrick needed, and from that point, she took off. Within three years, she was the first woman to lead the Indy 500 in 2005. She won an Indy Car race in 2006, switched to NASCAR — taking a major pay cut, she added — and won the pole position at the Daytona 500.

She had a bunch of top-10 finishes, finished in the top five at the Indy 500 twice. Yes, she wishes she had more wins on her ledger. She never won a NASCAR race and that did gnaw at her, because the records and milestones she really coveted were "genderless."

Yes, being the first woman to do this and first woman to do that, was something she was proud of, but she wanted to be one of the few drivers ever to win in IndyCar and NASCAR. She is proud to be one of only 14 drivers ever to be in the lead at both the Indy 500 and Daytona 500. Her career started in 2005 and her final race was the 2018 Daytona 500.

"If there was one 'woman' record I really wanted, it was to win on both series, but … I didn't. And then I got too old," she said. "Honestly, if you want to know why I retired is that what I really loved about the sport is that I loved having hope that it was going to get better next year. I loved being optimistic. I loved feeling like this was the year and every year of my career I felt like I felt that, 'This will be the year. This team. This crew chief or whatever.'

"But you know, I just felt like that that feeling went away," Patrick said. "I left the team I was driving for. There wasn't a spot on a team that I would've wanted to drive for so when that magic and hope went away I was like well I'm not attached to this, it does not define me. I'm more than just a driver, so I decided to pursue the other things that I am passionate about in life."

While the audience was riveted as she spoke about her racing career and wipeouts and fuel management and road courses and bumping, the parts of her life that were the result of her fame and celebrity were equally compelling, and Patrick wasn't afraid to share that part of her life as well.

She is dating Green Bay Packers quarterback Aaron Rodgers, so she talked about being in San Francisco on Sunday and watching his team get thwacked by the 49ers. That delighted many in the crowd.

PATRICK AND RODGERS: 14 best moments as a couple so far

PODCAST: Rodgers, Patrick cover the serious and the silly during interview

She talked openly about her struggles throughout her career with just how — for lack of a better word — girly to be.

Early in her career, she felt like if she wore make-up and nail polish and those type of things, she wouldn't be taken seriously, so she toned down her femininity. But as she got a little older, her mindset started to change.

When she was only 19, and just beginning her auto racing career in the United States she did a sexy photo shoot for a magazine called FHM. She received a lot of attention for that, and she realized that that extra level of fame actually helped her in her racing career. She "classed it up" and did the Sports Illustrated Swimsuit Issue and then famously the GoDaddy.com ads that were so popular during the Super Bowl. She embraced her feminine side instead of hiding it.

"My concern was always that people wouldn't take me seriously, and when I learned that I could do those things and be taken seriously as a driver, that changed things," she said. "I learned that this is a tool. There are so many people trying to find sponsors and trying to find jobs and I have this tool, and there are so many ways that being a girl hurts me in this sport, why don't I use the way that it helps me.

"And so I would say I never did anything I was uncomfortable with, but I probably have a bigger comfort zone than others," she said to a laugh.