David N. Dinkins, who died Monday night at 93, was the mayor of New York. But he was also the unofficial mayor of the tennis world.

Dinkins was an avid, even obsessive player, a friend of tennis stars — in 1990, Jennifer Capriati said, “The mayor is one cool dude” — a United States Tennis Association board member, and an advocate for African-Americans and youth in the sport.

Among the signature achievements of his tenure was the deal announced in 1991 for a new stadium that helped keep the United States Open in Queens. The plan had its detractors, including Dinkins’s successor, Rudolph W. Giuliani, who declined to attend the U.S. Open while in office. But another mayor, Michael Bloomberg, later said it was “the only good athletic sports stadium deal, not just in New York, but in the country.”

A love of tennis — and a resolve to diversify it — quickly became a key part of Dinkins’s public persona as he moved from assemblyman to borough president to mayor.

As he geared up to run for mayor in 1990, he was playing every Saturday and Sunday at the New York Tennis Club in the Bronx. “In terms of things I like to do, I am perfectly happy on a vacation if there is sun and sand and water, and a tennis court,” he said. Asked about his interests beyond tennis and politics, he answered, “What else is there?”

Early in his single term as mayor, a surprising issue soon began to hit the headlines: the incessant noise of jet planes taking off from La Guardia Airport and intruding on the tranquillity of the U.S. Open. Dinkins soon persuaded the Federal Aviation Administration to use special takeoff procedures during the 14-day tournament, keeping the planes farther away.

But a larger issue with what is now known as the Billie Jean King Tennis Center was still to come. Organizers were eager for bigger, better facilities, and hints were made about finding a new home for the event, perhaps outside of New York City. Dinkins brokered a deal for a $150 million expansion, crucially to be paid for by the U.S.T.A., not the city.

But the plan still had its critics. Outdoors lovers and civic groups bemoaned the loss of parkland that would be required. Eventually the plan was scaled back, to develop fewer acres and build only one new arena — which would become Arthur Ashe Stadium — instead of three.

Giuliani, who defeated Dinkins in the 1993 election but could not reverse the deal, faulted a provision that would penalize the city up to $325,000 if there were too many jet flyovers, and also knocked Dinkins’s love of tennis in general. (Giuliani is a baseball fan.)

Like golf-playing by presidents past and present, Dinkins’s tennis play was used by some as a weapon to criticize him. An article in The Daily News in 1991 claimed that Dinkins spent just three hours a day on city business and accused him of neglecting his duties to play tennis.

Dinkins refuted those accusations, and added that the article would not lead him to cut back his time on the court. “If anything, it’ll make me play more,” he said.

After losing to Giuliani in his re-election bid, Dinkins could play without complication. Checking in on Dinkins in 1995, The New York Times reported that he enjoyed “discussions of politics and government, family, social gatherings and tennis — though not necessarily in that order.” He began playing as much as five times a week.

In contrast, Giuliani continued to have little good to say about the sport or the U.S. Open, dismissing it as elitist. He said he would not attend the Open, because of his unhappiness with the contract to rebuild. He also declined to speak at the opening of the new stadium in 1997 and never attended the event as mayor. But with little public notice he did agree to approve the tennis center’s expansion after a review concluded that he had no basis for a challenge.

Dinkins continued to be a ubiquitous presence at the Open. He would stay at the grounds until midnight, then wake at 5:30 a.m. to play in Central Park. “I’ve been on the court with Chris Evert, Bjorn Borg, John McEnroe, Arthur Ashe, Billie Jean King, Virginia Wade,” he said. “And let me tell you, tennis players are the nicest people.” 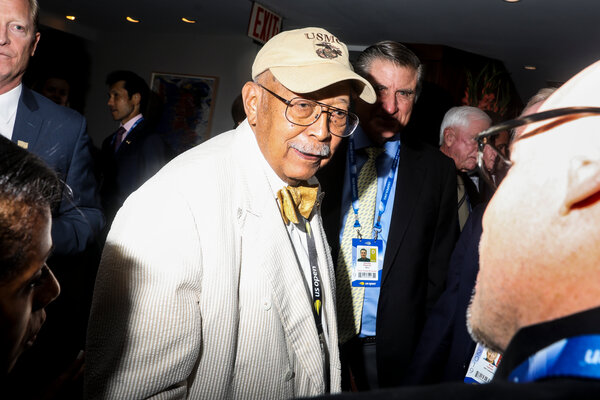 Dinkins also became involved with organizations that aimed to expand tennis’s reach beyond its stereotypical country-club image, notably the National Junior Tennis League, founded by Ashe, which introduces tennis to children and teens from low-income families.

“These programs teach our young people more than just tennis,” Dinkins wrote in The Times in 1990. “They reinforce values such as discipline, courteousness, good sportsmanship, team spirit and responsibility. And they provide our young people with an alternative to the streets and allow them to release creative energy in a positive way.”

He also made an impact when he served on the board of the U.S.T.A. “He was a loud voice in the room when it came to diversity and inclusion,” said Katrina Adams, a former Tour player and U.S.T.A. president. “He helped us to understand that we represented everybody.”

“My greatest interest and concern was that people playing tennis look like this country,” Dinkins told Tennis.com. “It has been my experience that having a seat at the table alters things.”

The tennis world honored Dinkins by naming an entrance to the tennis center after him, and he is also the namesake of some Harlem tennis courts.

But for tennis nuts, what ultimately matters is your game. So what was Dinkins like on the court?

Doug Henderson, a lawyer from the Inwood section of Manhattan and a longtime friend of Dinkins, who played with him in the ’70s and ’80s said: “He had a good game; he had strong legs. Today, the players use more of the upper body; he used his legs. He was ultracompetitive. He played until he just couldn’t play any more.

“He was immaculate in his suits and ties, and also in his tennis outfits and his manners.”

As he aged, Dinkins continued to seek challenging opposition. “He enjoyed playing with good players his age and much younger,” said Peter Knobler, who co-wrote the mayor’s autobiography, “A Mayor’s Life: Governing New York’s Gorgeous Mosaic.” “He played with Monica Seles and other pros. When players met him and found he had the same passion as they did, they responded.”

Dinkins continued to play doubles until he was 88. Adams, who played with him in those years on Roosevelt Island, said: “He would always have a diverse group with him, men women, Black, white, Asian, Hispanic. He always loved bringing people together. He was strategic, on the court, but also professionally.”

“When you reach your 80s, doubles is better for you. He wasn’t very powerful and not very quick then. The passion and the intensity was there, but the changeovers got longer and longer. But he loved his forehand, especially passing down the line. I remember, because I got passed quite a few times.”