Port Adelaide has demanded the AFL hand over the full report on the Sam Powell-Pepper investigation, declaring some evidence has been "completely misleading".

Power chairman David Koch said the club had been handed a summary of the report into allegations over what transpired in a late-night incident involving Powell-Pepper at an Adelaide nightclub on April 8. The player broke the team curfew and drank excessively on the night he was alleged to have assaulted a 20-year-old woman. 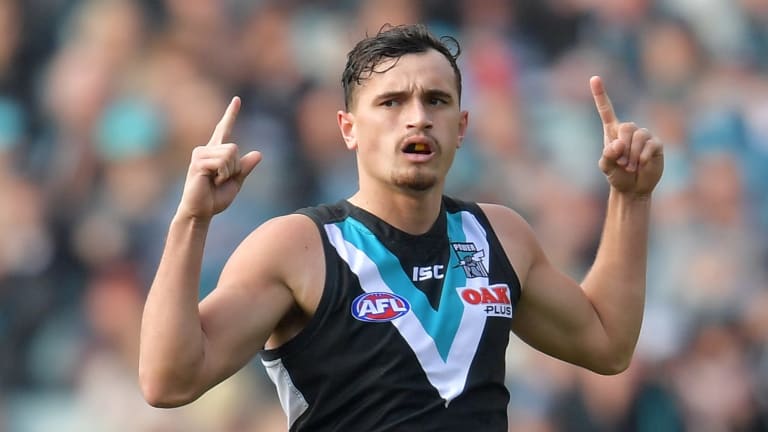 The Power insist the report is inconsistent with footage of the incident.

Powell-Pepper has served a one-match suspension imposed by the Power for breaking team rules and opted himself to miss last Saturday's loss to Geelong at Adelaide Oval.

It's understood Koch and AFL chief Gillon McLachlan have discussed the issue, with the Power fearing Powell-Pepper will be handed a heavy ban by the league.

Koch took to Adelaide radio on Monday to vent his displeasure at the AFL.

"We want to see the report, because our view is the report does not reflect properly what actually went on at the nightclub," Koch said on FIVEaa.

"We have video of the entire night and our view is that video doesn't match the findings of the integrity unit's report and we are backing our player. We think the allegations, and in particular some of the media allegations against Sam, on our evidence is completely misleading.

"That's why we want to see the report to see what other evidence that report contains, if any. We are stumped by that, we are frustrated by that, so frustrated, because it is putting enormous pressure on this young man.

"As I've said right from the very start, if there's evidence of any serious sexual abuse, then we would throw the book at any player but our vision of what happened on the night bears no resemblance to that."

Koch said if more evidence emerged "we’re absolutely happy to see that and consider it".

"If there’s evidence of any serious sexual abuse then we would throw the book at any player. Our vision of what happened on the night bears no resemblance to any of that," he said.

“They’re alleging inappropriate behaviour. We don’t even think it goes that far.

"We’ve been waiting a week for the full report. We were sent a summary and that was it. That’s not good enough. We want to see the full report – what is the evidence?"

It's understood those close to Powell-Pepper have also been frustrated by how he has been treated.

Koch said the Power were prepared "to take this matter further, to a hearing" if required.

"We've got QCs' opinions on it who have actually seen the vision of the night," he said.

"As I've said, if the vision showed anything to that level we would absolutely be the first to take action, but our view of it, is that it doesn't match what the integrity unit is alleging.