No David Pocock, no Christian Lealiifano, a 35-game Australian rugby losing streak and a nine-year drought against the Canterbury Crusaders.

Beating New Zealand teams was already hard enough, but it's now even closer to mission impossible after Pocock was ruled out of a Super Rugby rivalry battle at Canberra Stadium. 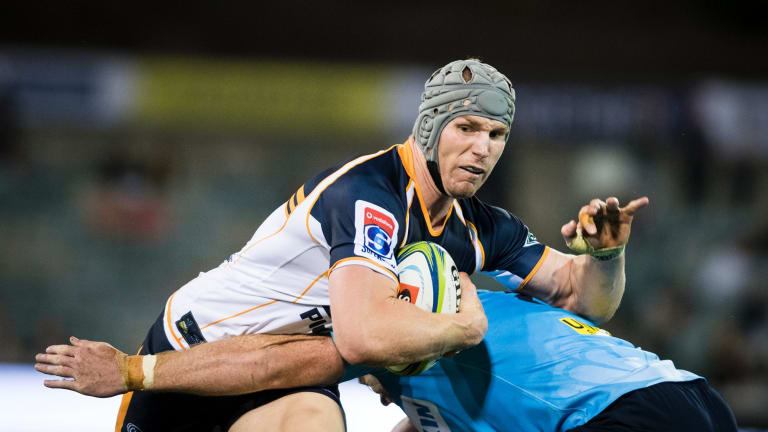 David Pocock has been ruled out of the game against the Crusaders.

ACT Brumbies star Pocock will join co-captain Christian Lealiifano in the stands on Saturday night, robbing the side of its two most influential players for perhaps the biggest game of the season.

Pocock's calf muscle strain was a major blow for the Brumbies' hopes of beating the Crusaders for the first time since 2009 and another dagger aimed at Australia's hopes of ending a trans-Tasman nightmare.

The Brumbies must look like a beaten-up boxer going into a new weight division with one arm tied behind their back. But sometimes wounded fighters are the most dangerous.

Brumbies coach Dan McKellar is philosophical about losing Pocock, one of the world's best flankers, presence at the breakdown or Lealiifano's calmness. But he views it as a chance chance for lesser-known players to step up.

"We're going out there to win. That's how we approach every game," McKellar said.

"We need that enthusiasm and energy to start with. Hoping the guys [who have come into the team this week], they'll bring a whole lot of energy.

"The last time we played a New Zealand side, the [Otago] Highlanders in Dunedin, we were well in that game. It's the critical moments. We'll be well in the game on Saturday night.

"You've just got to make sure you put the opposition under pressure, win the [critical] moments and take the chances you get. We've got a planned and we need to be disciplined to execute it.

"Medically the advice was give [Pocock] a week off leading into the bye and he'll be ready to go for the [Melbourne] Rebels game. He certainly wasn't 100 per cent fit [last week]."

McKellar has made three changes to the starting side, with Pocock's injury forcing a major re-shuffle that will see lock Blake Enever play at blindside flanker for the first time in his Super Rugby career.

Tom Cusack will shift to the No. 7 role to fill Pocock's sizeable shoes, while veteran Andrew Smith has been injected into the back line at the expense of inside centre Kyle Godwin.

There are several changes on the bench, with Ben Alexander and Faalelei Sione recalled as the back-up props, Lolo Fakaosilea returning from injury and Andy Muirhead to add spark from the reserves list.

Captain Sam Carter will play his 100th game in another milestone moment, which McKellar hopes will add extra incentive to the Brumbies.

The match doubled in importance after the Brumbies lost against the Argentina Jaguares last weekend and missed a golden opportunity to land blow on the standings in the Australian conference.

It sets the stage for a major upset and an unlikely triumph if the Brumbies can topple the defending champion Crusaders.

The Brumbies haven't beaten a New Zealand side since round one of the 2016 season, but have been the closest of the Australian teams to end the curse.

They lost by just four points against the Crusaders last year and were in the contest against the Highlanders two weeks ago before being blown away in the last 20 minutes.

"You can't be going out there and just trying to defend and play within yourself," McKellar said.

"When the game is in the balance with 20 minutes to go, that's when the really good teams rise and go to another level. We've got to understand that."

The Brumbies have been hit by back-row injury woes this year. Pocock (calf), Ben Hyne (knee), Rob Valetini (knee) and Lachlan McCaffrey (elbow) are injured and unavailable for selection.