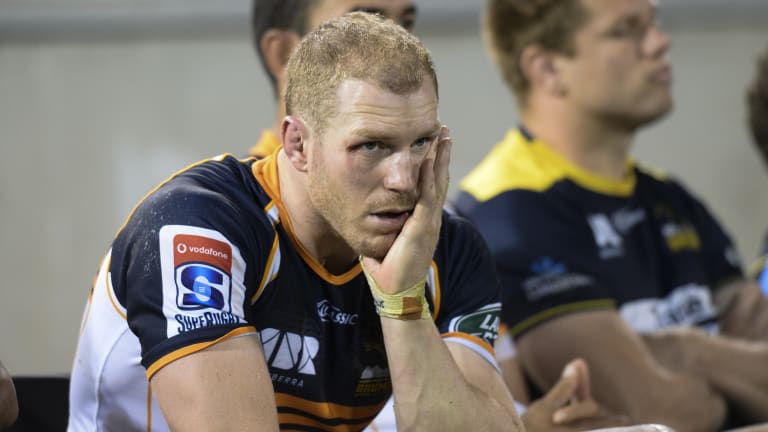 David Pocock has been ruled out of the Brumbies’ game against the Rebels.

The ACT Brumbies' hopes of getting their finals hopes back on track have been dealt a major blow after David Pocock was ruled out of a crucial Australian derby clash in Canberra.

The Brumbies will wrap Pocock in cotton wool as he continues his recovery from a calf strain, refusing to risk the superstar flanker's long-term availability to rush him back to play the Melbourne Rebels on Saturday.

Pocock has played just four games this season after a knee injury delayed his start to the year before struggling to overcome a calf problem for the past three weeks.

But in his limited appearances Pocock has been the Brumbies' best player and has recaptured his world-class form after a 12-month Australian rugby sabbatical.

A looming two-game tour of South Africa after the clash against the Rebels led to the Brumbies leaning on the side of caution to avoid more damage to his calf.

His absence against the Rebels, however, will be somewhat offset by a returning cavalry of players, with Christian Lealiifano, Rob Valetini and Lachlan McCaffrey all back in the starting XV.

McCaffrey is the surprise addition given he dislocated his elbow just one month ago. But the dislocation didn't damage any ligaments or fracture any bones, allowing the back-rower to make his return.

He will be a part of a new back row alongside Valetini and Tom Cusack, with the trio set for a tough task to topple the Rebels.

Valetini, 19, played just 20 minutes in his Super Rugby debut in round one before injuring his knee. He hasn't played since, but made his return via Canberra's club rugby competition.

Lealiifano returns after being rested for almost one month as the Brumbies manage his fatigue and workload in his comeback season.

Brumbies coach Dan McKellar has added Andy Muirhead to the wing to replace the suspended Chance Peni, who will miss five games after being banned for a high tackle.

The Brumbies are fourth on the Australian conference ladder and a loss against the Rebels would almost be the final nail in their 2018 coffin.

The Rebels overpowered the Brumbies in Melbourne earlier this year, but both teams have struggled to find form since.

Virgo weekly horoscope: What your star sign has in store for January 11 to 17

Kiton Men’s Fall 2021
We and our partners use cookies on this site to improve our service, perform analytics, personalize advertising, measure advertising performance, and remember website preferences.Ok