Lleyton Hewitt has warned Alex de Minaur's rivals to underestimate the teenager's firepower at their peril as the countdown begins to another exciting summer of tennis.

The season begins on December 30 in Brisbane where Hewitt expects de Minaur to "have a target on his back for sure" following his meteoric rise this year. 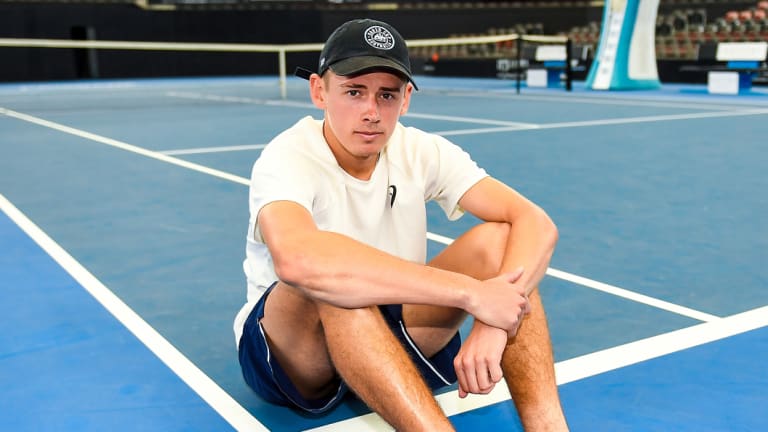 Just the beginning: Alex de Minaur poses at Pat Rafter Arena in Brisbane. The teenager is set to continue his meteoric rise under the tutelage of Lleyton Hewitt. Credit:AAP

Fans have marvelled at de Minaur's speed and Hewitt-like tenacity during his climb to No.31 in the world, with one photographer at this year's Sydney International even claiming the boy wonder was so quick he needed half an hour to capture him in focus.

Hewitt, though, says de Minaur's challengers will be caught out if they mistake the 19-year-old for merely a relentless retriever.

"We look at guys like Frances Tiafoe. At the US Open, he hit Frances off the court. He matched it with [Marin] Cilic.

"So his timing's that good and his body weight's going through the shot so well that he can actually take it to those guys.

"I still think he's got a lot of filling out to do as well, which will happen naturally, but we've got to try to fast track it a little bit as well."

Describing mentoring de Minaur as a joy, Hewitt admitted he sees "a fair bit" of himself in the new Australian No.1.

"Probably the biggest thing is he's willing to do it all," said the Davis Cup captain and former world No.1. 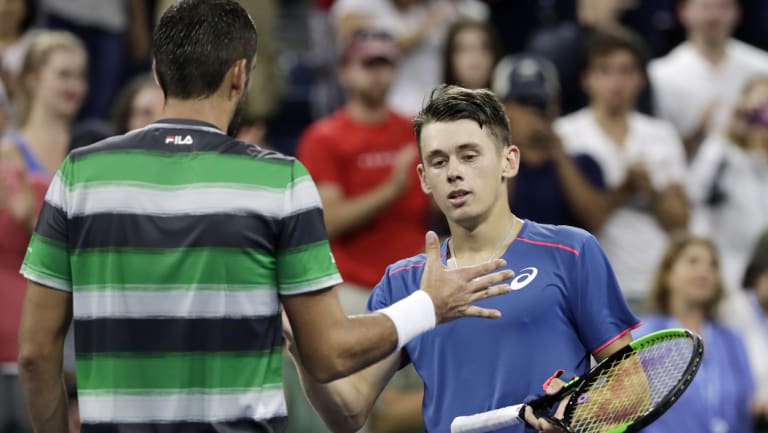 Down to the wire: Marin Cilic and Alex de Minaur at the net after going toe to toe in the third round of the US Open this year. Currently ranked No.7 in the world, the Croatian won in a five-set epic.Credit:AP

"For me, it's so easy to be a mentor to someone like Alex. He is like a sponge.

"So he's easy to deal with in that sense. He's very open-minded with a lot of things as well in terms of his schedule and trying to work out what is the best situation.

"For me, he has been a thrill to work with."

A long-time admirer of de Minaur's backhand, Hewitt and his Spanish coach Adolfo Gutierrez have tweaked the youngster's forehand this year.

But, standing 5cm taller than Hewitt at 183cm, de Minaur's next task is improving his serve.

"But there's still tweaks that we can work with so that he doesn't have to work as hard as I did every service game."