The deal between athlete and audience is souring

There is a bizarre penchant in this country for demoralising sportspeople. At best it’s entertaining. At worst it is hypocritical, and dangerous. People seem with one hand to be imbuing sportspeople with magic and potency, and with the other a suspicion that they don’t deserve these things.

Consider recently Adam Goodes, Bernard Tomic, Nick Kyrgios, Steve Smith, David Warner and Cam Bancroft (not to mention James Hird, Mark Thompson and Jobe Watson). These are not just sportsmen, but some of the very best.

What they have in common is having been humiliated by the sports that fostered their fame, if not by their own actions then by ideas about them projected either by corporate face-saving or by the double standards of their audience.

How many of the people who booed Goodes out of the AFL were also online, demolishing Tomic for being “un-Australian”, or hating on Kyrgios for being himself on the tennis court? How many who wanted Hird to admit he was a cheat later expressed sympathy for him when he overdosed on sedatives? Who among the voices calling for Steve Smith’s blood considered afterwards the difference between their breakfast television ideals and the reality of this person’s life?

Consider Tomic, a man unto himself, perhaps fatally flawed but also hilarious, a product of random stylings and, clearly, world tennis itself. It was pitiful to see people wait for him as he tried to qualify for the Australian Open this year, hoping, as they were, that he would lose and offer them some acidic line. 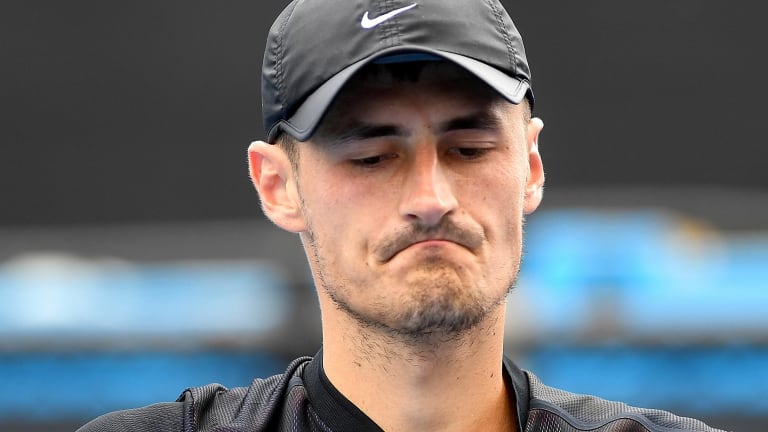 Tomic, bless him, gave them what they wanted, some garbage about counting his millions, but behind that was a still young man in pain, self-flagellating and embarrassed. His failure to articulate his inner world was not as great as the failure by others to recognise it, and to not mock it for what it obviously was.

He’s not been without company in this. At times it appears sportspeople are barely in control of their lives. They are economic commodities, and tools for debate about behavioural standards that no one else is judged by; in retirement they are mocked, by their own sense of displacement if by no one else’s.

The modern sportsperson’s morals, important as they have become to the audience, sound when they’re expressed like jargon, suggestions made either by the players’ employers or their lawyers. Their audience is often frivolous, extremely harsh, and knows nothing about the players’ fear of failure, or of the future they cannot see.

It is, you might say, the price of admission into money and fame – the short, tumultuous life of a sportsperson. But the deal is souring, the looseness and variety of character once presented by our sports teams is being mined out by the robotic reach of its money men, and still worse by an idea that sportspeople should reflect normality.

Yes, Smith conspired to break cricket’s rules. It needs to be discouraged, but manipulating a cricket ball to make it swing is hardly a lynching conspiracy in cricket – it’s common practice. The level to which his players stooped in participating was unusual but his treatment was beyond the scope of sport, and had an air of sick about it. To read later in the British press the outrageous suggestion of Smith’s “crocodile tears” was testament to the morality of the story being more theatrical than it was accurate. 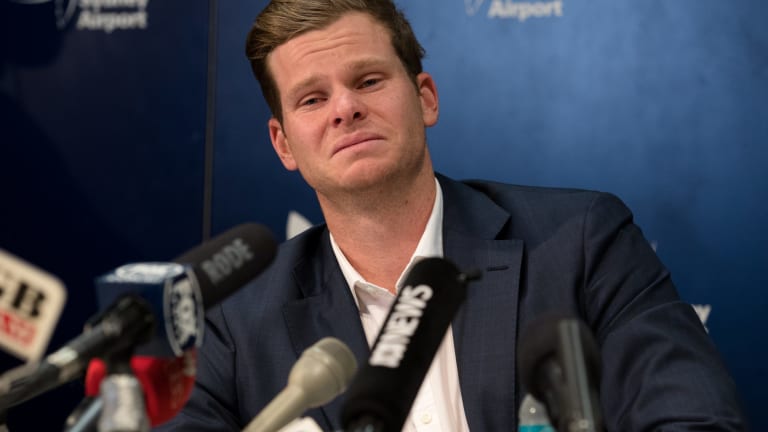 Steve Smith on his return to Sydney after the ball tampering scandal.

It’s hard to imagine it was only an inner calling to shepherd the nation’s morals that lead CA executives to ban the Australian trio for an unprecedented 12 months. It’s far easier to imagine that what made it possible was the administrators’ own embarrassment, and desire to retain their jobs.

What must have been in Faf du Plessis’ head, sitting at a press conference in South Africa (having been twice caught ball-tampering), watching his fallen comrade Smith be dismantled before a global audience? If he felt some survivor’s guilt he might also have felt that South Africa was in the end beaten by Australia, if not on the field then by an idea of its greater righteousness. Your ball-tampering captain may have won the series, but ours won't play the best year of his career.

It was a corporate lynching, perhaps someday for the sake of cricket, but now for the sake of a myth about Australian culture, the same culture the current players learned from their new coach’s generation, which, in some “cultural” way lead them to this. So far it has all worked to trample the lives of the men in the arena, and preserve the sanctity of the administrators, who displayed neither the grit to resign their own positions, nor to stand up for their captain.

What those Australian cricketers did is ridiculous, more than it is sinister. What is sinister is the total destruction of these men by popular opinion. No one thinking clearly would condone the players’ actions in SA, but who can say that the whole story did not reveal more about our strange relationship to sports people than it did about the players themselves?

People seemed to dislike Warner for his gracelessness well before that series, but when it ended he was positively hated. Maybe all of this is born of a desire to project our better angles onto the sports field, but it’s hiding rather well behind our willingness to see them fall.