Melbourne forward Tom McDonald says the Demons' inability to hold on to a five-goal lead against Geelong was "upsetting" but has defended how teammate Bernie Vince handled the gut-wrenching defeat.

The Demons had what appeared to be a match-winning 29-point lead two minutes into the final term against the Cats on Saturday night but were unable to secure a breakthrough victory against a top-eight side, their fate sealed when Zach Tuohy marked and then converted after the siren. 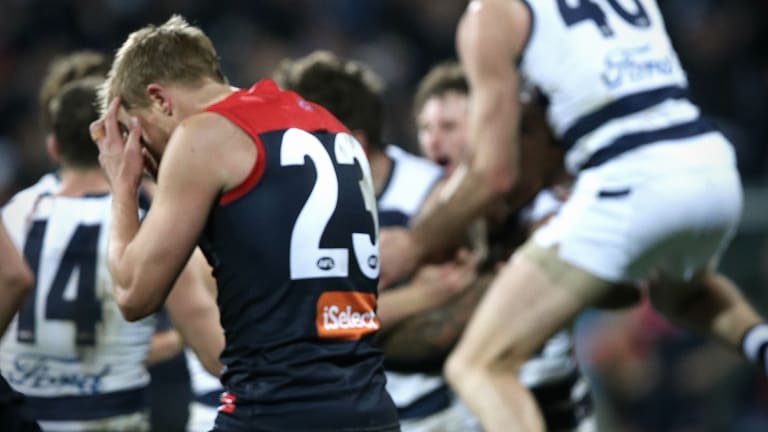 Melbourne’s Bernie Vince reacts as the Cats celebrate their victory.

The defeat was the Demons' fourth by 10 points or less and they have lost all four matches against top-eight teams this season, sparking questions as to whether they are mentally strong enough to handle furnace-like pressure.

Veteran defender Bernie Vince has had his post-match reaction questioned publicly, for supporters watched as he enjoyed a laugh minutes after the siren with former Adelaide teammate Patrick Dangerfield. While Vince was initially crushed by the result, his demeanour soon changed, in stark contrast to teammates. Christian Petracca and Max Gawn, for instance, were almost in tears.

"I saw 'Danger' had a tweet – they have been mates for 10 years, they have family friends, Bernie's family was in the rooms after the game. If you think Bernie is not gutted because he is talking to a friend for a decade, I think you have bigger issues to fry than worrying about what Bernie is laughing about after a game that he has put everything into and done a pretty good job," McDonald said.

"I know how much Bernie cares. Players have laughed after games before. When we beat Adelaide a couple of years ago, the same thing – Dangerfield was laughing with Bernie after the game. Players lose and they are allowed to have their lives as well."

Dangerfield wrote: "Known each other for over a decade and not allowed to talk about family post game… #itsagame #spell."

McDonald conceded the Demons had been "in a little bit of disarray" in the final minutes which led to the Cats winning the ball at half-back and retaining possession until Tuohy marked but insisted his team would be ready to rebound in another imposing cauldron – this time in a high-stakes clash against the Crows in Adelaide on Saturday night.

"It was upsetting, frustrating, and they won – it was one kick in the entire game that makes a difference in the end. But we did a lot of things right," McDonald said.

"We played pretty well for a lot of the game and we were better than them for three quarters. We had a pretty poor last quarter when they were really good. Their top-level players stood up and got them over the line. We didn't really figure out a way to hang on to it. It's upsetting but you have to move on."

McDonald, who booted four goals, said the blood rule which forced Gawn from the field with just over a minute remaining had hurt but statistics showed the Demons were poor in the final term. They were crunched 7-1 at centre-bounce clearances while the surging Cats had a 61-37 advantage in uncontested possessions, the defeat leaving the Demons clinging to seventh spot.

"I think we were in a little bit of disarray. Maxy gets sent of with the blood rule, I went into the ruck, we probably would have sent either me or Max behind the ball and some more numbers to push back," McDonald said.

"I think we made a mistake of having too many numbers around where the footy was and not enough back in play … if I had my time again, I probably would have started yelling at players to get back on the field and make it harder for them [the Cats] to go coast to coast. We were probably just trying to keep it locked in that forward 50 and make it really dense around that area."

Coach Simon Goodwin also made reference to McDonald's decision to quickly play on and goal with five minutes left. While the goal, McDonald's second of the term, gave the Demons a steadying eight-point lead, Goodwin had wanted his key forward to soak up the full 30 seconds.

"He [Goodwin] referenced playing on and kicking a goal than taking the 30 seconds – that was my shot. I wasn't kicking them great on the night so I thought I would take the certain goal and play on on that one. Maybe in hindsight, you take the extra 30 seconds," McDonald said.

"There are heaps of other parts of the game where maybe if we just take the ball over the line, the boundary line, maybe you kill the clock but if you do that, what if it is a free kick for a deliberate out of bounds? These are all decisions players are making. It is so quick and you are under so much stress and so much fatigue at that part of the game it's hard to think to clearly. They probably did that better than us."

The Demons, battling for a return to the finals for the first time since 2006, hope to have co-captain Jack Viney (foot) and running defender Michael Hibberd (quad) back for the round-21 clash against Sydney.