Can we talk starting pitchers or, more to the point, their ritual sacrifice on the altar of Major League Baseball analytics?

I put this question to Leo Mazzone, the former pitching coach for the Atlanta Braves and the custodian of one of baseball’s greatest rotations of starting pitchers: Greg Maddux, John Smoltz and Tom Glavine, Hall of Famers all.

The 2018 playoffs and World Series offered a parade of twitchy managers yanking their starting pitchers after four innings, summoning a parade of faceless relievers to throw one mind-numbing fastball after another for fractions of an inning.

This is spectacular for the radar gun industry, but is it watchable and good baseball?

I heard Mazzone snorting on the other end of the phone line, no, no and no. “It is an embarrassment and insults the intelligence,” he said. “They are abusing pitchers and calling it smart.”

Mazzone imparted this gospel to his pitchers: Trying to heave balls as fast as you can is for muscle-beach dolts. A good pitcher throws at 85 to 90 percent of effort and makes the pitch move and hit its location. Varies speeds, too. As for the notion a pitcher can last but five or six innings before batters grow wise and clobber him?

“A high school coach asked me, ‘Leo what do you think of analytics showing that pitchers struggle the third time through a lineup?’ I’ll tell you want that is, that’s the manager covering his (you know what),” he said.

The equation guys who run most major league teams bow to holy verities: No starting pitcher should throw more than 100 pitches. Some starters should not throw as many as 70. To admire the number of wins a pitcher accumulates or to encourage him to toss a complete game is expose yourself as a Paleolithic hunter-gatherer. Pitching is all about WHIP and FIP (I’d explain the definitions, but then our heads would hurt) and a conga line of relief pitchers. 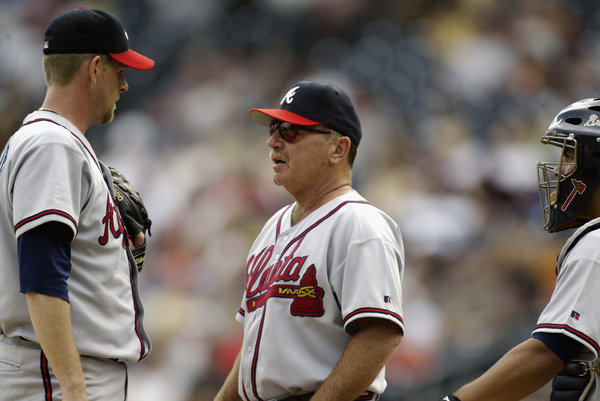 Look, on a good day I don’t drag my knuckles along the sidewalks of Flatbush, Brooklyn. I dig sabermetrics and back in the day treated Bill James annuals as religious text. I keep a three-foot-high stack of the analytics-obsessed Baseball Prospectus at home. But at risk of registering as a get-off-my-lawn crank: So much of the wisdom about pitchers is dubious.

I set to thinking about this after watching my Mets spend much of November and December in a modestly lunatic attempt to trade Noah Syndergaard, one of the National League’s best starting pitchers. They appear to have failed at this self-mutilation. Now that they have retained two true aces — Syndergaard and Jacob deGrom, the Cy Young Award winner — why not stretch them out and push them to go deeper into games? What is the point in allowing an ace to pitch six innings before turning the ball over to a committee of anonymous relievers?

Game 4 of the 2018 World Series presented something of a nadir when Los Angeles Dodgers Manager Dave Roberts, a bright fellow no doubt, pulled his starting pitcher after he had yielded a single hit through six and a third innings and was ahead, 4-0. The Dodgers ended up marching six relievers into that game, lost, 9-6, and exited the World Series the next day.

Mazzone pulled out a few of his remaining hairs.

“The problem is that so many pitching coaches and managers are yes-men and don’t want to challenge their front offices.”

There’s a sizable mound of statistical evidence to back such assertions. At risk of giving the quadratic dudes a seizure, I turned to Baseball Reference and selected 40 pitchers from the past half-century, men who ran the gamut from solid to superb. These are the sort of pitchers you’d expect to see in the postseason, and my list included Bobby Ojeda, Mike Torrez, Steve Avery, Tom Browning, Tom Seaver, Steve Carlton, Ferguson Jenkins and Mazzone’s troika of Hall of Famers. I examined their performances across games, from beginning to end.

For most good pitchers, their worst inning was the first. Once they found a rhythm and once pitches began to crackle, they became progressively more difficult to hit. Tom Seaver’s career earned run average in the first inning was 3.75. His E.R.A. for the last three innings of a game, that dreaded third and fourth time through the batting order, stood at 2.75.

So current analytic wisdom does a headstand.

(By way of insane outlier, Seaver won 25 games in 1969 and helped pitch the Miracle Mets to a World Series championship. He pitched the ninth inning 17 times that season and surrendered not a single run.)

This is a familiar pattern. Mike Mussina gave up fewer runs on average in the seventh, eighth and ninth innings than he did in the first three. He was at his best in the ninth inning. The best inning for Ron Darling and David Wells was the eighth. (Requisite caveat: By definition, these pitchers were having a good outing if they made it to the late innings.)

If you hoped to beat Dodgers pitcher Fernando Valenzuela, you were advised to start hacking early. He had a career E.R.A. of 4.25 in the first inning. When Valenzuela was still pitching in the ninth inning, and he got there roughly 127 times in his career, his E.R.A. was 2.19.

Luis Tiant, the Red Sox and Cleveland ace, was nearly as tough. He pitched just over 206 times in the ninth inning and had an E.R.A. of 2.40.

Greg Maddux had a 3.23 E.R.A. in his first three innings and a 2.86 from the seventh inning through the ninth. And while he possessed a good fastball, it was not a three-digit express train. One spring training in the mid-1990s, Maddux, who in a 23-year career piled up 355 fairly meaningful wins, asked to speak with the team’s young pitchers.

Mazzone nodded. Sure thing, Mad Dog, whatever you want. The coach lined up the young guys and Maddux walked over.

Mazzone was not enraptured by pitch counts. He would not push pitchers to stupid extremes, but he refused to hew to limits without basis in medical fact. He had pitchers run and throw every day in between starts, and they had remarkably few injuries. In one three-year stretch, his pitchers missed a single start.

“We kept track of pitches and I had a clicker,” he said, “but if Tommy Glavine gets a pop up on a changeup, hell, I’m not counting that.”

He recalled a Braves vice president by the name of Henry Aaron who offered advice about the dangers of radar gun intoxication. “Don’t worry about pure speed,” Aaron said. “You can run a jet airliner through the strike zone, and I will figure out how to rope it down the line. Locate a ball that moves at my knees, and I’m out.”

All of which brings me back to the Mets, a team I’ve followed for many, often hapless, decades. Their manager, Mickey Callaway, sounds as enamored of pitch counts as his peers are. All of this seeps into the brainpans of young pitchers who labor under the impression that five or six innings constitute a day’s work.

Syndergaard is a fine pitcher and susceptible to the idiocies of the age. A year ago he pumped iron in the off-season in hopes of throwing even harder than 100 miles per hour, and that season he blew a muscle in his side. He appears to accept the notion that pitching through the seventh inning lies beyond the limit of human exertion, and last season he posted a 7.88 E.R.A. in that inning.

His rotation mates are no different. On the rare occasions they pitched into the seventh inning, Zack Wheeler and Steven Matz posted calamitous E.R.A.s of 5.65 and 6.35.

Mazzone went to Cooperstown in 2014 for the Hall of Fame inductions of Maddux and Glavine. They got to yakking before the ceremony, and Mazzone asked what they would have done if, in the course of pitching a World Series shutout, he had come to the mound to pull them from the game.

Glavine looked him, smiled thinly and replied, “Mazz, we were going to have a fight on that mound.”