LIVERPOOL, England — Friday morning, and Goodison Park is quiet. There are no fans milling around the streets outside, spilling out of the Winslow pub, eagerly rushing to their seats. There is no noise, no color, no riot of blue and white. There are only a handful of cars in the parking lot. It is spitting with rain.

A stadium is a home, but that is, in truth, only an occasional role. These are places that blossom only every other weekend, as Goodison will on Sunday when Liverpool arrives for the latest Merseyside Derby. For much of the rest of the time, though, a stadium is dormant, quiet: an empty, expectant shell.

The day-to-day life of a club — the parts of it that are dedicated to the business of soccer, and the parts of it dedicated to the soccer business — happens elsewhere. For Everton, the former is at Finch Farm, its training facility on the eastern fringes of Liverpool. The latter is in the Liver Buildings, on the city’s sparkling waterfront, where Everton relocated its offices last year, a new home for all those departments whose job it is to sell shirts and tickets and sponsorship deals. To most fans, a club is a team, hopefully to win games. To all owners, a club is a business, hopefully to make money.

A club is more than that, though; there is another side, one which does its work not on the field at Goodison Park or in the suite of offices in the city, but in the tight warren of terraced streets that surround the stadium, in schools across Liverpool, in some of the most underprivileged parts of Merseyside.

Across the street from Goodison Park, a group of children are playing on the Cruyff Court — a small, artificial soccer field surrounded by a metal cage, built in conjunction with the Johan Cruyff Foundation — behind Everton’s community hub. Inside, teenagers mill and mingle with teachers and coaches in Everton polo shirts. 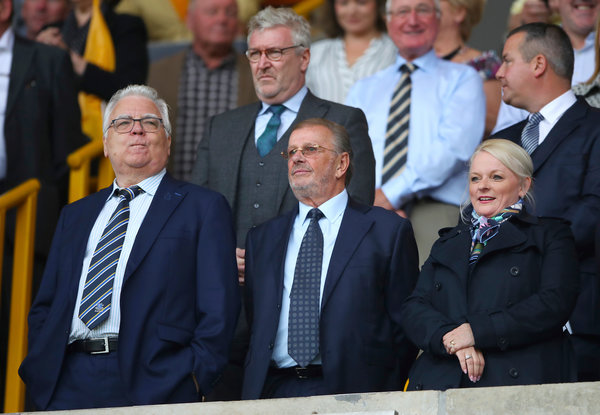 Around the corner, in what was once a run-down working men’s club, a few dozen retirees are spending the morning cycling through their memories — of Everton, of the city — over tea and cake. Pat van den Hauwe, a tough-tackling defender who played for the team in the 1980s, is helping serve the coffee.

On Goodison Road, the club has bought three houses and converted them into drop-in centers, safe spaces for anyone who feels they need a place to go. Their doors are always open. There is always someone to talk to. There is always food in the fridge.

All clubs run outreach programs, of course, and employ staff members to work in the communities they call home. But few, if any, can match Everton’s for size and scope. The buildings that house Everton in the Community cost more than $10 million to develop; the program’s annual budget is around $4 million. It has 125 staff members and 145 volunteers. It works in more than 200 locations: schools, youth clubs, community centers.

There is barely a part of life in Liverpool — and particularly in the L4 postal code that is home to both Goodison Park and Anfield, Liverpool’s stadium, and among the most deprived areas in Britain — that the club does not touch.

It oversees more than 40 social programs, focused on issues as diffuse as mental health and serious organized crime; it reaches more than 20,000 people a year. Last year, Everton won a grant of 700,000 pounds, or about $925,000, to lead a government scheme on Merseyside to tackle gang culture. It has a presence in 150 schools. In September 2015, it became the first club to launch its own school.

Everton has, for more than a decade, styled itself as Liverpool’s People’s Club, a term popularized by David Moyes, its former manager, to distinguish it from its near neighbor. Banners bearing the phrase flutter from Goodison Park; scarves embossed with the slogan can be bought from stands around the stadium on match day.

“Our fans hold us up against that image,” Everton’s chief executive, Denise Barrett-Baxendale, said. “They expect us to live up to it. It is not a corporate social responsibility program. It is long-term, strategic work. It is a huge component of what Everton is.” So substantial, in fact, that before she was promoted to running Everton last year, Barrett-Baxendale ran not the commercial section of the club, or its merchandising arm, but its community department.

It is not just the scale of Everton’s work that marks it as different, though; it is the scope of it, too. Everton goes into areas other clubs — and other charities, even — might find “intimidating,” as Barrett-Baxendale put it. Sue Gregory, Everton in the Community’s director of youth engagement, recalls representatives of other teams marveling at the fact that Everton — in theory, just a soccer club — was prepared to work with convicted criminals, drug dealers, members of gangs. “You could see it as the club risking its brand,” she said.

Barrett-Baxendale does not. “We work on these issues because these issues exist on the streets of Merseyside,” she said. It is a view supported throughout the club. At the start of the season, Everton’s players signed a pledge that they would do their part to help with community work. A copy of it hangs on a wall in the Community’s hub. There have been times that players have had to be reminded to leave after sessions there: Tom Davies, the midfielder, once insisted he was happy to stay for as long as possible at one session because he was busy “coloring in unicorns.”

Gregory, her staff and her volunteers know how much all of that matters. They hear all of the stories: the teenagers forced to work selling drugs for gangs to settle their parents’ debts, or chased through the streets for punishment beatings; the boys sent hundreds of miles from home as part of the “county lines” phenomenon, in which city gangs seek to control the drug market in smaller towns; the children who stock up on food at the sessions because there is not enough to eat at home.

Everton does not have a choice, in other words, but to confront those problems. Shying away from them would make all the work it does nothing but tokenism. “This is our community,” Gregory said, adding: “These are the issues our community faces. There is a culture of ‘let’s try.’”

Wherever it can, it makes the most of the power of its crest: The white-on-blue depiction of Prince Rupert’s Tower, instantly recognizable, is part of the city’s civic scenery. It transcends tribal loyalty — many Liverpool fans are part of the Everton programs — and represents, instead, permanence.

“People trust the badge,” said Richard Kenyon, Everton in the Community’s chief executive. “They respond to it in a really powerful way. They’re drawn to it.”

“We are a consistent presence,” Gregory said. “Kids might have a really good connection with a teacher in one year, but then they move on, and the kids lose that. We are always there, so that bond is not lost.”

This, more than the team or the business, is what a club is, what a club can do. Not far from Goodison Park is one of Everton in the Community’s smallest projects: a little corner of scrap land that has been converted into an herb garden. The plot is little more than a postage stamp. When Everton started it, encouraging children from these streets to tend to it, some worried that it would be ruined, vandalized, maybe even in its first few days. That was months ago. It is still pristine.