Melbourne are banking on Tom McDonald to add some grunt to their misfiring attack as they look to get their AFL season back on track against Essendon.

The key forward will play his first game of the campaign when the Demons take on the Bombers at Etihad Stadium on Sunday after overcoming a foot injury.

McDonald's inclusion was one of five changes coach Simon Goodwin made following the Anzac Day eve loss to Richmond. 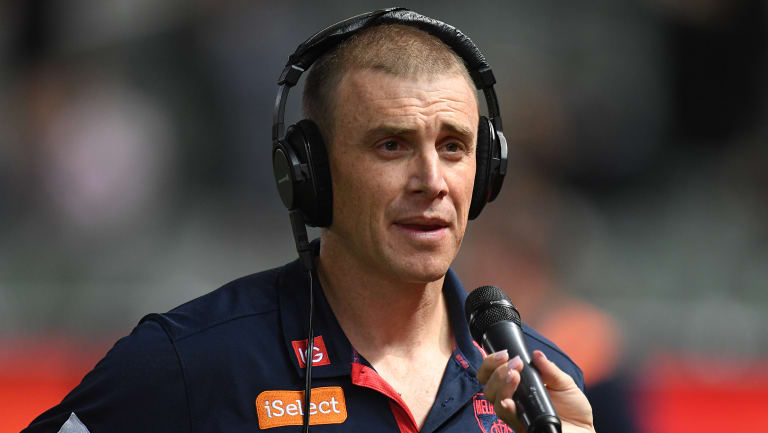 Simon Goodwin has made some big selection calls at the Demons.

Jordan Lewis is back after missing just one game with a broken hand, with Charlie Spargo, Bayley Fritsch and Mitch Hannan also in.

Goodwin confirmed the versatile McDonald will be deployed inside forward 50 to boost an attack that managed just six and eight goals in two losses leading into the clash.

"He's an important part of our team … he provides a real contest aerially for us and a real predictability about how we play," Goodwin said.

"We're doing well in terms of our contested ball and our ability to turn the ball over through the middle of the ground – it's now [about] our ability to connect and obviously be more efficient going inside 50.

"That's something that we're focused in on and he will certainly add to that."

Jeff Garlett has been removed from that attacking mix, Goodwin dropping the speedy forward after a lean spell in front of goal.

Christian Petracca is also out after a wound from a dog bite became infected.

"It wasn't ideal … a fair few things come across your desk as a senior coach but dog bite is a new one," Goodwin said.

"He was trying to break up a fight between his two dogs, he got bitten and from there it's become infected."

The match looms as an early pressure test for two teams who have performed below expectations.

Both have two wins and three losses, with Melbourne 14th and Essendon 13th.

"Every club will go through little cycles where they're in and out of form," Goodwin said.

"At the moment we're coming out of a [down] cycle. We thought we made some progress last week."

The Bombers made five changes to the team that suffered a heavy defeat to Collingwood on Anzac Day.