The NFL's Denver Broncos confirmed Saturday night that starting quarterback Drew Lock, his backup and the team's practice squad signal-caller have all been declared ineligible for Sunday's game against the New Orleans Saints because of coronavirus concerns.

Broncos wide receiver Kendall Hinton, who played quarterback in college for Wake Forest, will handle the job as an emergency fill-in, NFL.com's Ian Rapoport wrote on Twitter, citing information from a source.

In addition to Lock, the other ineligible players are backup Brett Rypien and practice squad veteran Blake Bortles. All three were deemed high-risk close contacts with No. 3 quarterback Jeff Driskel on Wednesday, the day before Driskel tested positive for COVID-19, a source told The Associated Press.

"With NFL/NFLPA protocols mandating a five-day quarantine period for high-risk close contacts, we were informed by the leage that Lock, Rypien and Bortles will be ineligible to participate in Sunday's game against New Orleans," the Broncos wrote in a statement posted online.

"We will continue to work closely with the NFL whenever there is a positive COVID-19 case, including sharing all available information in a thorough and ttimeley manner to ensure the safety of our team."

The news came as the league and other sports organizations, like the rest of the world, continued to grappled with the devastating virus, which has infected more than 62 million people worldwide and killed more than 1.4 million globally, according to Johns Hopkins University.

Meanwhile, the San Francisco 49ers were considering their options Saturday night after new protocols in Santa Clara County, Calif., where the team plays home games, appeared to make them unable to host games at Levi's Stadium for the next several weeks, according to FOX 2 of the Bay Area.

The 49ers' next two home games are scheduled for Dec. 7 and Dec. 13, the station reported, adding that the team had no immediate comment about its plans.

In the Broncos' statement, the team wrote that Lock, Rypien and Bortles have all consistently tested negative for COVID-19, but the NFL had identified them as "high-risk COVID-19 close contacts." 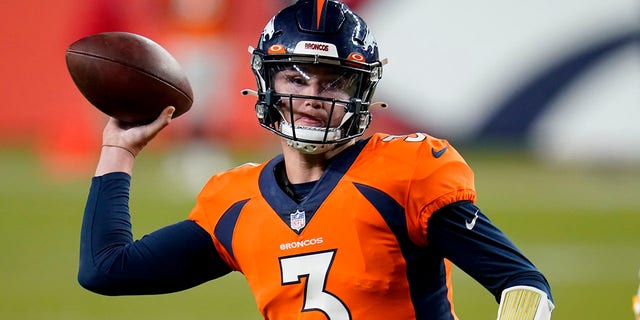 Denver Broncos quarterback Drew Lock throws a game-tying touchdown pass against the Los Angeles Chargers during the second half of an NFL football game, Sunday, Nov. 1, 2020, in Denver. (Associated Press)

All three immediately left the team's practice facility after learning the NFL's decision, the team said.

The team's statement did not mention Driskel.

A source speaking on condition of anonymity told the AP that all four quarterbacks apparently weren't wearing masks while together, as required by the league's pandemic protocols.

"Anybody know if Peyton Manning is busy tomorrow?" Fant wrote, referring to the retired former Broncos star. "Laughing but serious."

"I'm not one to complain," Fant wrote in another message, "but @NFL y'all can't possibly send us into a game without a QB. The most important position to an offense. We don't even got a back up…."

The Broncos also joked about the situation, asking the NBA's Denver Nuggets if they could borrow a player.

The NFL cleared the Broncos to practice on Thanksgiving Day after Driskel tested positive for the virus and again Friday after kick returner Deontae Spencer tested positive along with two staffers, according to the AP. But coach Vic Fangio decided to shut down the building Friday and the team conducted meetings remotely.

Lock, Rypien and Bortles were loosening up before Saturday's short walkthrough practice when they were pulled off the field and sent home.

They'll have to quarantine for several days and in order to return next week will have to continue to test negative for COVID-19. The NFL isn't allowing any teams to gather until Wednesday out of concern the Thanksgiving holiday might have exposed players to infection.

After learning of their dire situation at quarterback, the Broncos' brain trust of Fangio, general manager John Elway and team president and CEO Joe Ellis spoke with officials from NFL headquarters.

The league's contact tracing protocols include checking electronic contact devices, interviews and review of surveillance, and the league has been busy investigating coronavirus cases on multiple teams.

Denver enters Sunday's game with a 4-6 record while the Saints are 8-2.

The Associated Press contributed to this story.