Denver police have identified the fan suspected of hurling a canned beverage at 18-year-old U.S. soccer prodigy Gio Reyna, injuring him at the end of the CONCACAF Nations League final against Mexico at Empower Field at Mile High over the weekend.

They gave his name as Pablo Ibarra Fuentes, 30. The incident sparked condemnations from around the sporting world, and video replays show a jarring impact that left Reyna staggering.

“If you cannot behave, and you cannot follow the basic act of normal human behavior and decency, then you should not be allowed to come to the game ever under any circumstance,” Jim Gray, a veteran sportscaster and Fox News contributor, said Tuesday afternoon. “There’s no excuse to throw anything at any player, coach, official or fans at a game.” 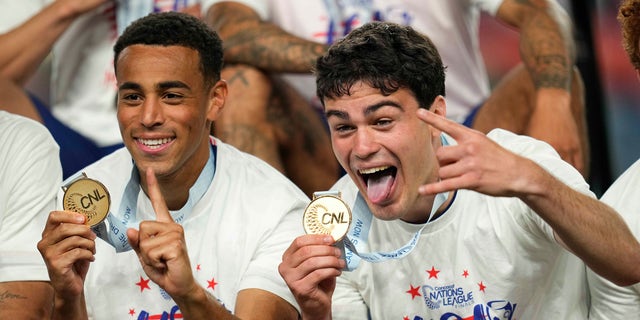 Police said they had no information on Fuentes’ nationality, but witnesses told Fox News that the fans of team Mexico were disorderly and inappropriate at some points in the game, which had to be halted briefly as officials issued a warning over a homophobic chant that erupted in their section of the stands.

Max Bretos, a sports journalist and the announcer for Los Angeles FC, was at the match, several rows behind the fan who hurled a can that blindsided Reyna in the temple and sent him reeling.

“You could hear the impact of those things,” said Bretos, who was moving through the stands and covering the game for his podcast, “The Soccer OG.”

“He was struggling to walk,” Bretos added. “He looked like somebody who took a punch.”

In the heat of the moment, and witnessing from a distance, he tweeted that he believed a “full Coca Cola” had been launched at Reyna’s skull. But in a phone interview Tuesday, after reviewing different angles of the incident, he said he now believed it was a full beer can hurled from 20 yards out.

Fans seated near the Mexican goal hurled numerous objects onto the field after team USA’s superstar Christian Pulisic, 22, converted a game-winning penalty kick in extra time, and teammates gathered near the corner to celebrate.

Reyna had scored a tying goal earlier in the game – with his parents, both former Team USA stars themselves, cheering in attendance.

Video showed the impact snap his head to one side before he raised a hand and keeled over, stumbling toward teammates.

“Some people should spend the night in jail tonight, or longer,” Bretos tweeted after witnessing the behavior.

He got his wish. Denver police charged Fuentes with throwing projectiles and four others with trespassing on the field.

Disrespectful behavior from foreign fans toward U.S. players has happened in the past, Bretos said – but usually on foreign soil, and since players expect rude treatment, they protect themselves.

But the Team USA players in the corner Saturday were basically sitting ducks, he said, standing together in a hostile corner rather than sprinting out of range.

“On the road it’s to be expected, at home you hope you can avoid it,” he said. “

Later in Saturday’s game, a fan on the opposite end of the field hurled another drink at Team USA’s Theoson Siebatcheu. He ducked – and it slammed into a Mexican player.

Team USA coach Gregg Berhalter after the game called the behavior “a total lack of respect.”

Reyna is OK, according to Berhalter, and after the incident, he was photographed seated next to teammate Tyler Adams smiling and holding up the gold medals they earned in the win.