It led to an angry confrontation between Wilder and John Fury, Tyson’s dad, who was furious that Wilder had stolen the limelight. 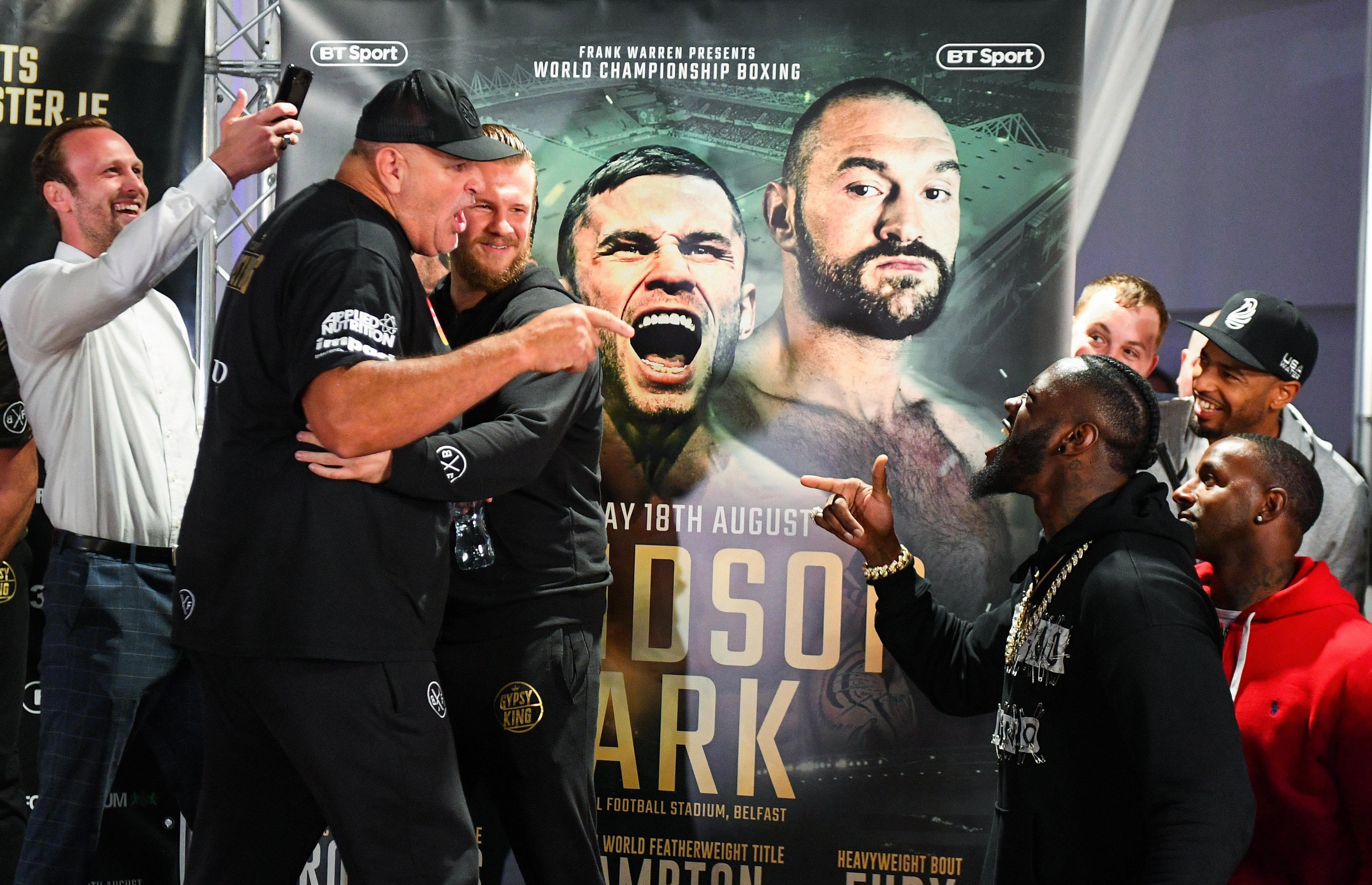 As Wilder shouted his “BombZquad” phrase over and over, John Fury tried to get to him, only to be held back by his team.

Wilder and Tyson Fury then clashed in the reception of the Europa Hotel in Belfast.

The feuding duo were involved in a slanging match amid a mass of fans filming their squabble.

At one point Wilder attempted to reach Fury but could not make his way through the sea of fans and was then escorted out with a grin on his face. 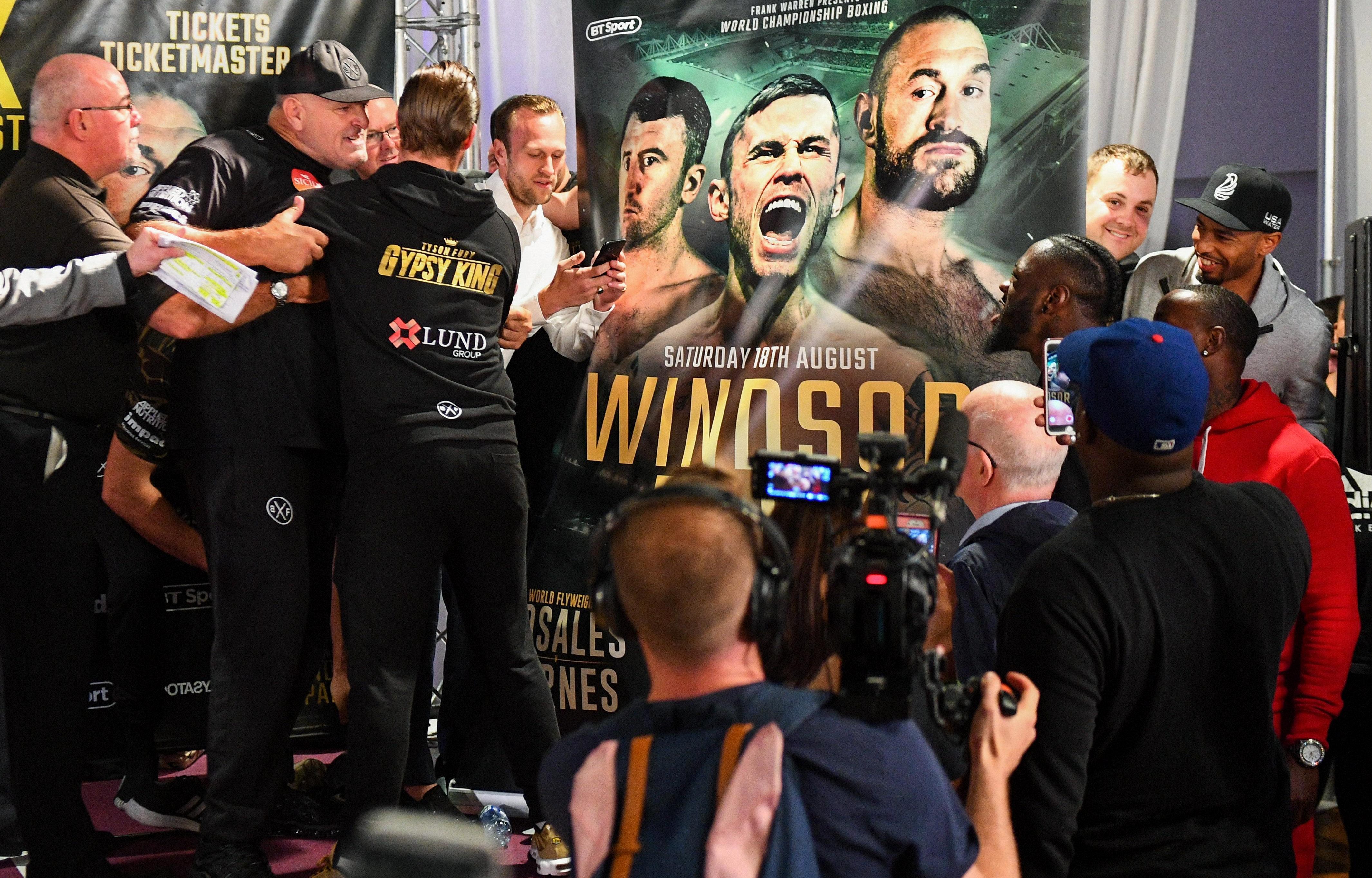 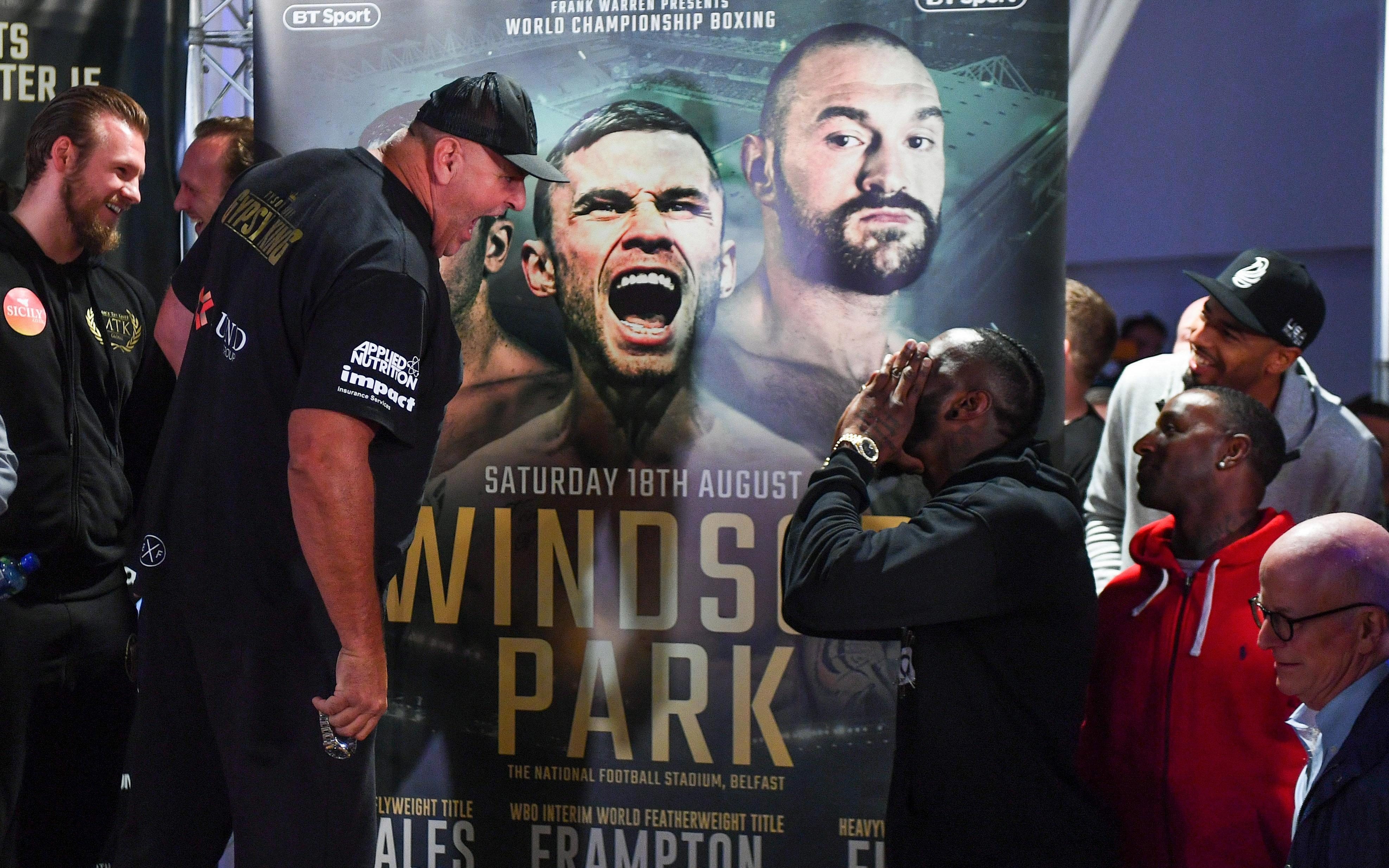 The Gypsy King is the huge favourite going in against Italian Pianeta, 33, and he already has his sights set on a crack at WBC king Wilder before the year is out.

The 'Bronze Bomber' is scheduled to be ringside for Fury's fight at Windsor Park to get a closer look at his future opponent.

Wilder said today:  "As soon as he gets this guy out of the way, it's done. That's how simple it is."

Wilder is set to announce the Fury fight on Monday in London.

Fury has promised to put on a show and make "Italian sausage" out his opponent this weekend.

He said: “If he [Pianeta] chins me I’ll crawl across the ring and kiss his two feet.

“He’s a big strong fella and he knows that if he wins he will fight Wilder instead of me. If I can’t beat him I’m not going anywhere. 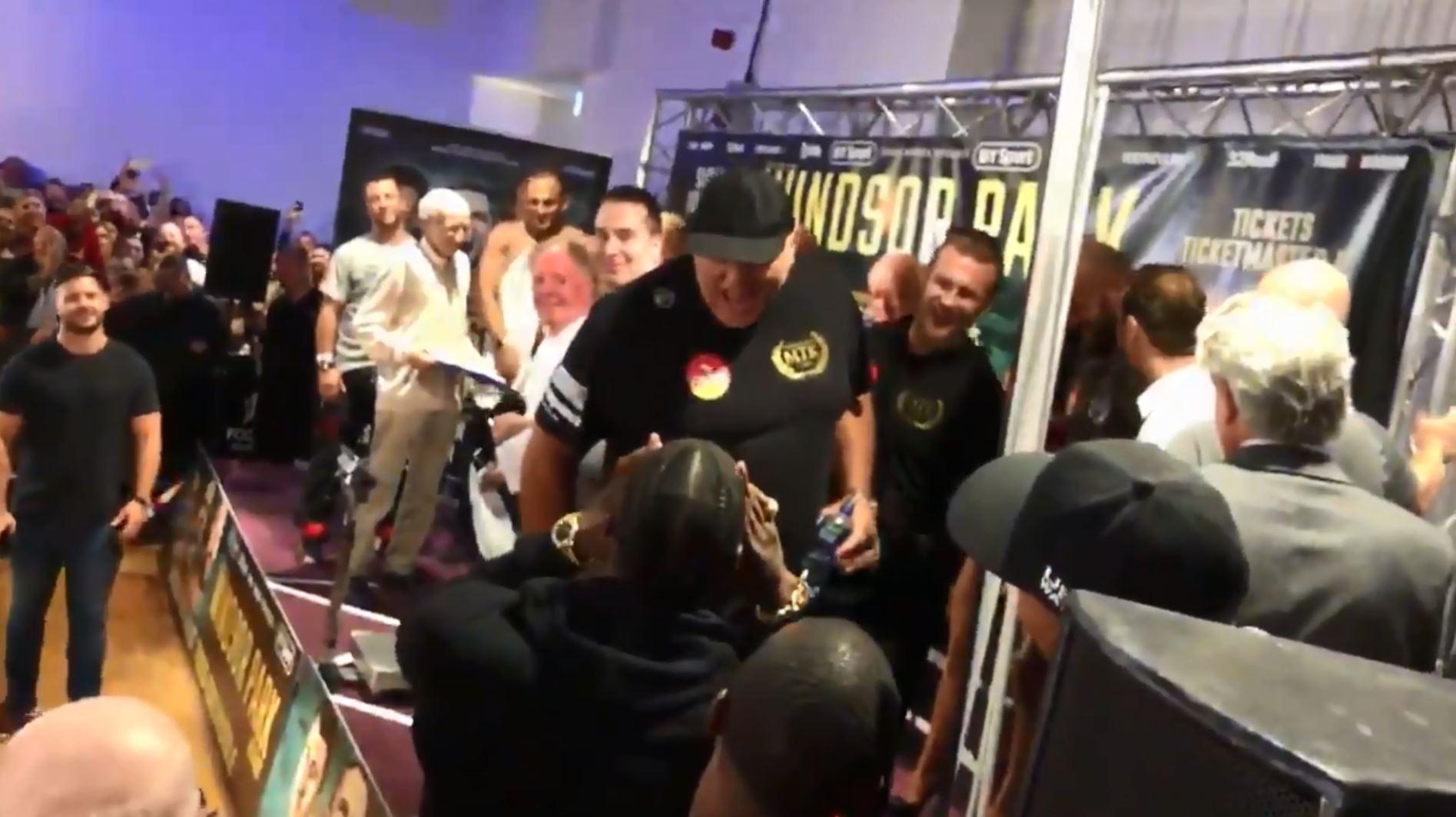 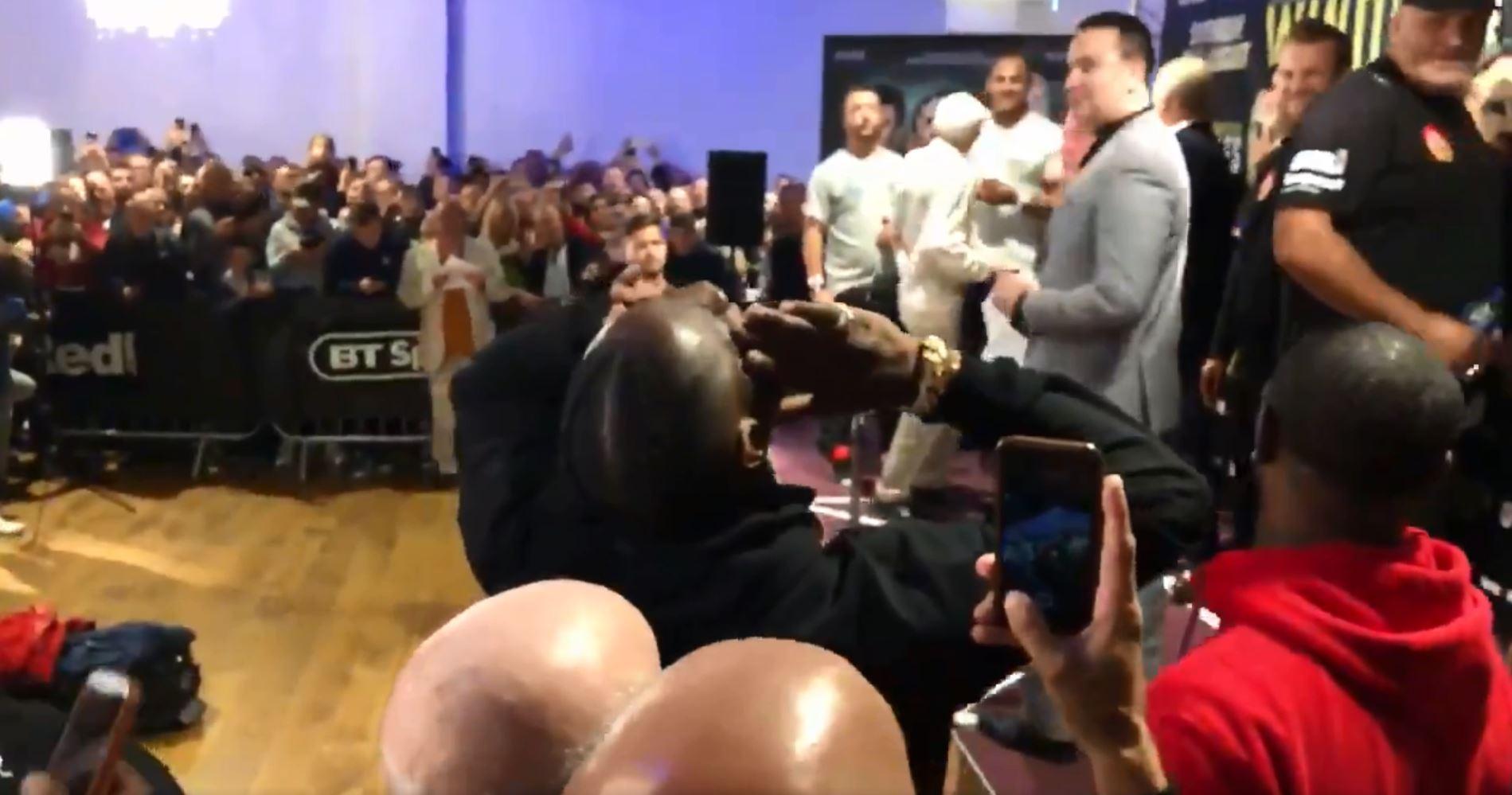 “He’s a very dangerous opponent but in my mind I think I’m the greatest heavyweight that’s ever been born so I should handle Francesco Pianeta.

“And whoever else, Anthony Joshua, Deontay Wilder, all the bums out there. To me they’re only bums anyway.

“I’m going to go out there and smash him to pieces and make Italian sausage out of him.

“I’m going to give him the best hiding he’s ever had. He’s going back to Germany smashed to pieces. I’ll kiss him better though after the fight.”

Frampton will be looking for a classy victory to set him up for a crack at Josh Warrington's IBF featherweight title in a real Battle of Britain scrap.

Frampton's fight is scheduled to be the last of the night with the ring-walk estimated for around 10.30pm.

Fury is expected to take to the ring around 9.30pm.