Cardiff looked set to move to within one victory of promotion to the Premier League when Callum Paterson struck in the first half. 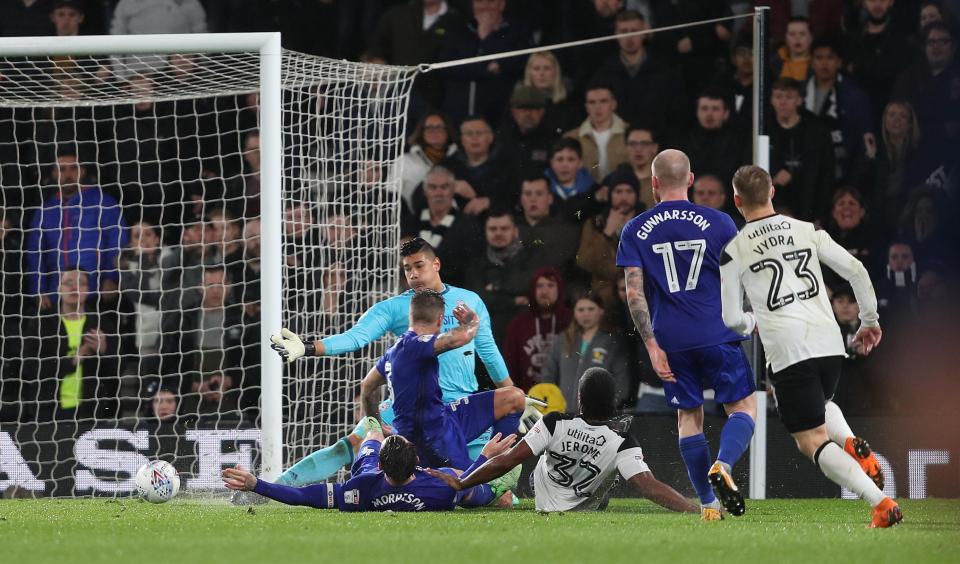 But two composed finishes from Bluebirds old-boy Cameron Jerome, as well as one from sub Matej Vydra, after the break threatened to derail the Welsh side’s automatic push.

Warnock’s men remain a point ahead of third-placed Fulham with two games to play so it is still in their hands.

But having been so close to putting the champagne on ice for what would be a record eighth promotion for the 69-year-old, this turnaround will have been a bitter blow.

This became the Championship’s most controversial fixture of the season due to a furore eventually dubbed “Snowgate”.

The original clash last month was postponed due to heavy snowfall overnight which Derby claimed left the surrounding areas at Pride Park “unsafe”.

It enraged Warnock, who had already travelled up with his team, and the Cardiff boss branded the move a “disgrace”.

He even hinted whether the number of players Derby were missing through injury at the time had played a part.

The EFL investigated the matter but ultimately were left satisfied with the Rams’ decision. 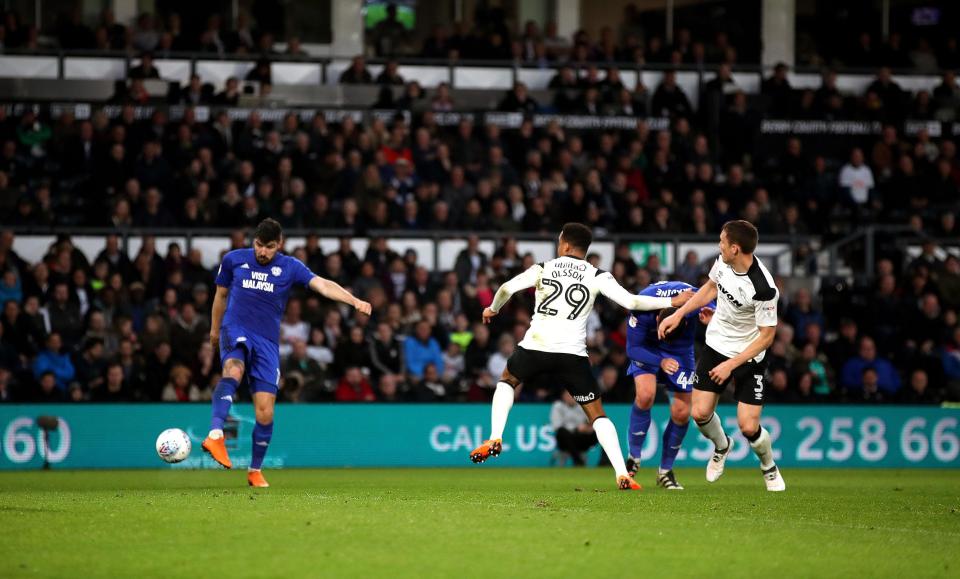 But that did not prevent Warnock and opposite number Gary Rowett continuing a war of words over the situation in the intervening weeks before last night’s match.

Away fans saw the funny side of it all with some turning up with shovels and sledges to the game, while one dressed as a snowman.

This game was also one of the most significant in the second tier this term.Not only did it have an obvious impact on Cardiff’s automatic hopes and Derby’s play-off ambitions.

But it had a knock-on effect for all clubs from second to 11th in the table vying for either reward, with Millwall chief Neil Harris in attendance to check out potential play-off opponents.

Derby had been in miserable form, winning just two of their last 13 games which had seen them slip out of the play-off spots.

Keeper Scott Carson even admitted it was “unbelievable” that the Rams were still in the mix for the top six after such a run of form following Saturday’s 2-1 defeat at home to Middlesbrough.

That game had seen Rowett switch for the first time to a 3-4-3 formation.

He stuck with it here despite the loss but did spring a surprise by dropping his biggest goal-getters in Vydra, whose 19 league goals make him the divisional joint-top-scorer, and David Nugent to the bench.

While Warnock also made an unexpected change by leaving out Kenneth Zohore in favour of Gary Madine, who is yet to score since joining the club in January from Bolton.

Derby had the first real chance with Andi Weimann playing in Tom Lawrence, but the ex-Leicester ace saw his close-range shot well smothered by Neil Etheridge. 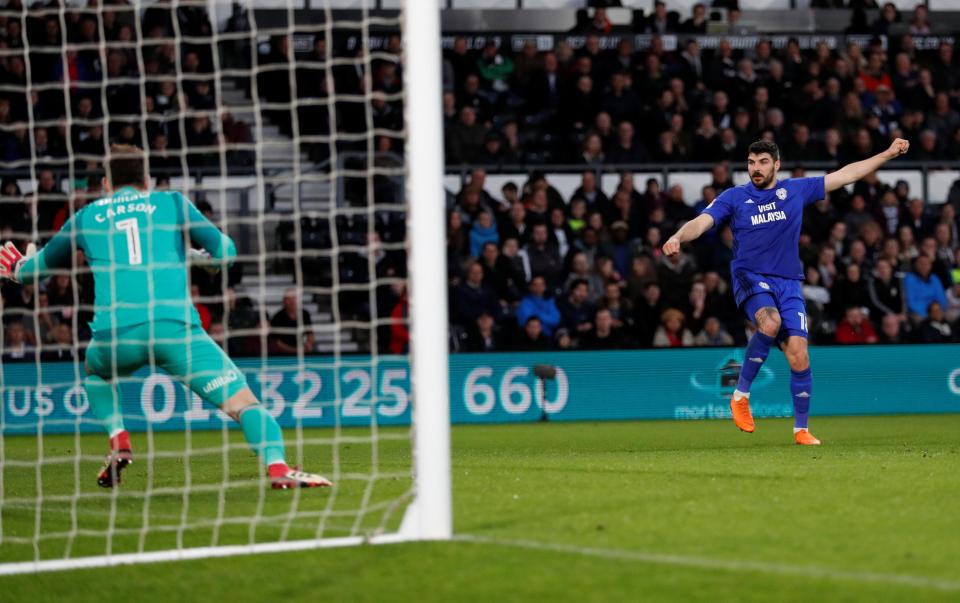 The visitors then had a possible shout for a penalty as a shot from Jamie Ward – another surprise starter – appeared to hit Bradley Johnson’s hand but nothing was given.

Cardiff shrugged it off and on 28 minutes were in front thanks to Paterson’s sweet strike.

Left-back Joe Bennett lofted a cross to the back stick and when Marcus Olsson missed his header, there was the Scot to belt it in on the half-volley from a tight angle.

It was another memorable moment in what has been a magnificent breakthrough campaign for the 23-year-old, who rivals Phil Neville for his versatility.

Paterson started the campaign as a right-back, where he recently played for his country, but has been deployed all across the midfield and behind the striker.

The goal had the away crowd crowing about their increased chances of promotion to the Premier League and the tantalising prospect of facing arch-rivals Swansea once again. 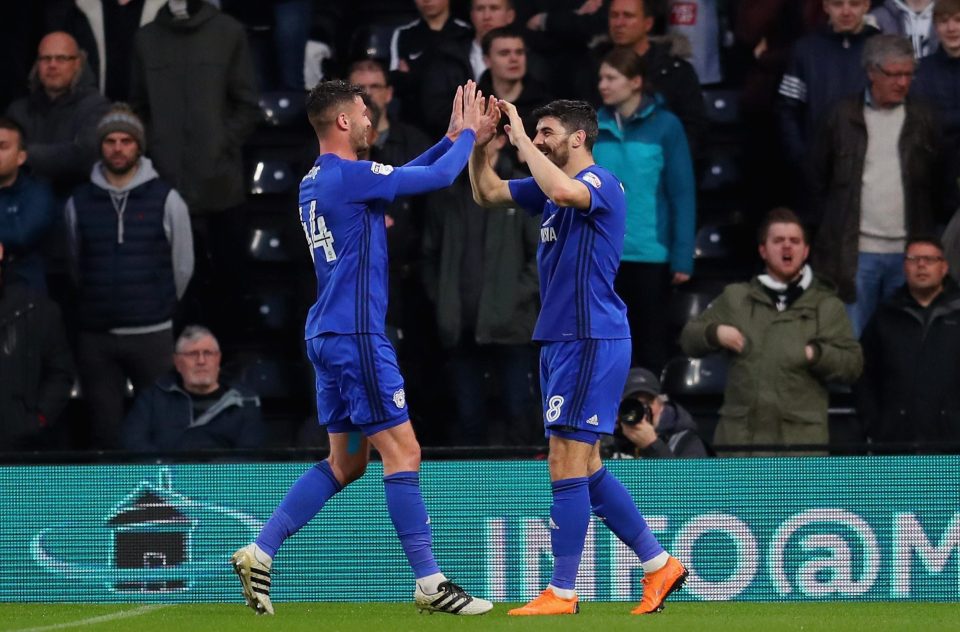 Warnock then moaned about two possible spot-kicks turned down for fouls on Madine, but replays showed ref Andrew Madley made the right calls.

Weimann then went close with a half-volley of his own which flew just too high and wide of Etheridge’s far post.

Vydra was thrown on the hour but it was Jerome who grabbed the leveller nine minutes later, following an Etheridge mix-up.

The Philippines stopper dropped a high ball and when Aron Gunnarsson only hacked half clear, the ball was eventually nodded into Jerome’s path by Richard Keogh and the ex-Norwich man slotted into the corner.

And then, with eight minutes remaining, Andre Wisdom managed to pick out Vydra who fired in his 21st of the campaign from 12 yards.

Jerome wrapped it up in the 90th minute with another unflustered strike that Etheridge could not keep out.

It was a huge boost to Rowett’s play-off push, lifting his side into the top six and two points clear of Millwall with games against Aston Villa and Barnsley to come.

The home crowd taunted their Welsh guests with the National Anthem and derogatory songs directed towards the visiting manager.

But for Warnock, after all the furore surrounding this fixture, it was snow joke at all.