One of the first times James Cummings met Sheikh Mohammed, it was at a gathering to celebrate the prime minister of the United Arab Emirates' worldwide racing operation winning its first Epsom Derby with Masar this year.

His Highness spoke to the hundred-plus staff gathered, trainer Charlie Appleby addressed them, too. And Godolphin's head conditioner Down Under thought how great it would be if the blue army could break their own drought in Australia's most famous classic race. 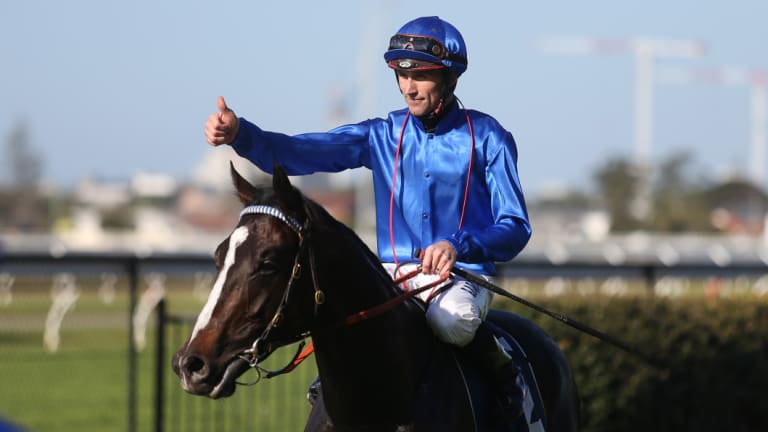 "It was a great atmosphere and it struck me how similar it was to the way I used to run my business and the way we try to celebrate and reward that sort of effort," Cummings said.

"Those results, they might only be a fleeting moment of time but it comes after so much hard work and so much teamwork to push yourself beyond what you could do in normal day-to-day activities to get a result like that."

Cummings became a fourth-generation trainer to win the Victoria Derby when Prized Icon, which he prepared as a public trainer, won the race two years ago.

He will combine with last year's Victoria Derby-winning rider Tye Angland and Aramayo in the $2 million feature at Flemington on Saturday.

The Spring Champion Stakes runner-up trails only Melbourne Cup aspirant Thinkin' Big in betting and is hoping to go one better than Etymology, Complacent and Induna, which have run second in the Victoria Derby under the Darley and Godolphin banner in the past six years.

"I tell you what Aramayo is, he could be mistaken for being a European import and that could go a long way for the horse first time at 2500 metres," Cummings said.

If that horse walked into the enclosure first-up in August as a four-year-old behind Cracksman. I think people would take a lot of notice.

"If that horse walked into the enclosure first-up in August as a four-year-old with form behind Cracksman, I think people would take a lot of notice. He's got a narrow second in a group 1 in the best run of his career to date on a big track, and two starts later he's back on a big track at Flemington. It bodes well for him."

The shadow of Thinkin' Big ($2.90) looms large though for his Derby rivals as Aramayo remains steady at $6.50 on the second line of betting.

"I've been impressed with Gai's [Waterhouse] horse from the moment I came up against him at Rosehill one day," Cummings said. "I had a filly [Laburnum] start favourite against him, but I said to the boys, 'Look at the size of this horse. This horse is a mature, ready-to-go, staying two-year-old'.

"And he destroyed us that day at 1500 metres and he couldn't have been more impressive the other day winning the Gloaming. But they don't hand out the Derby and he'll have to earn it."

Hugh Bowman has a stunning recent Victoria Derby record, but is not brimming with confidence that either his mount Home Ground or any of Thinkin' Big's rivals can upset the apple cart.

"The reality is, if [Home Ground] can get a nice run, he goes in with nice form," Bowman said. "But I think the favourite looks to have a bit of a mortgage on it, to be honest.”