AUGUSTA, Ga. — Bryson DeChambeau was specific on Tuesday about his long-driving plans to brazenly overrun the Augusta National Golf Club, home to the Masters tournament since 1934. For sports fans who do not follow golf, here are some points of reference:

What DeChambeau envisions is something akin to kicking a 75-yard field goal. Or slamming a 650-foot home run. Sinking a half-court shot with the ease of a free throw. Now imagine doing those things 14 consecutive times in the midst of a single major competition.

That is what the beefy DeChambeau plans to unleash on the Masters when he tees off in the first round at 7:33 a.m. Eastern on Thursday. It doesn’t mean DeChambeau will shoot a record low score, but regular viewers of golf’s most-watched event might see some things they have never seen before. And since DeChambeau has been remarkably accurate with his towering drives in practice rounds this week, it’s worth noting that he is also the betting line favorite to back up his United States Open victory in September with his second major golf championship at the Masters.

On Tuesday, the ever-meticulous, numbers-driven DeChambeau, who has gained 40 pounds in the last year and anywhere from 30 to 70 yards of length on his drives, went hole by hole with his plans for Augusta National.

He skipped the par-3 holes, because, let’s face it, what’s the point talking about short challenges? DeChambeau only goes big and is planning to bomb tee shots over 100-foot tall pine trees to cut the corners on 510-yard holes. Or, consider the 445-yard first hole, which is entirely uphill and has been played this week in wet, soft grass conditions that starkly inhibit the roll of a tee shot.

At least for the everyday, multimillionaire pro golfer. Not DeChambeau-flex.

He expects to have only 60 yards left on his second shot at the first hole. That’s a rather effortless wedge shot from there for anybody. On the second hole, DeChambeau said in practice rounds he has been hitting a 7-iron for his second shot into that par 5, which is 575 yards long. Keep in mind that many other golfers in the field will be hitting woods and hoping to land on that green.

The 350-yard third hole? Piece of cake; he’s been driving that off the tee. The 495-yard fifth hole? Well, it has been playing into the wind so he’s had to settle on a 9-iron for his second shot. Bummer that’s not a wedge, too.

And on and on it went Tuesday as DeChambeau ticked off how easily some of the Augusta National greens could be to reach. For him.

As for the course’s most pivotal, and typically daunting, final holes, DeChambeau has big plans for those as well. A pitching wedge to the 11th green, same thing for the 510-yard, par-5 13th hole. He plans an 8-iron into the par-5 15th. And the famed 18th hole?

DeChambeau figures to fly the bunkers on the left, an old ploy of 1991 Masters champion Ian Woosnam, except the hole was dozens of yards shorter 29 years ago. So, what’s the advantage to that strategy on the modern, lengthened 18th? 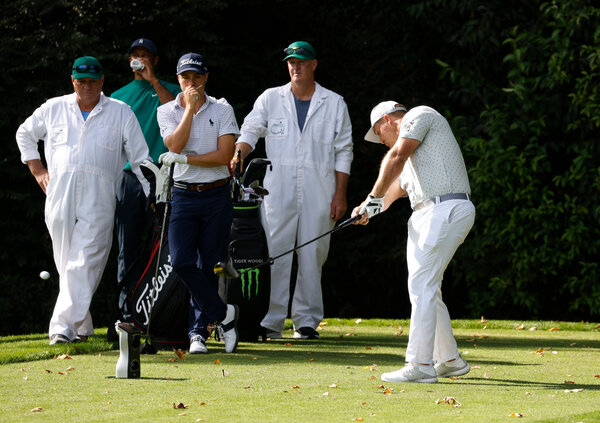 Said DeChambeau with a shrug: “I can have only 110 yards to the green.” As in, another wedge.

His contemporaries are in on the gag and know what’s coming. Justin Thomas, the third-ranked golfer in the world, played a practice round with DeChambeau on Monday.

“It’s a substantially easier golf course for him than it is for everybody else,” Thomas said with a laugh. “I sure would like to be hitting from his tee shots as opposed to mine distance-wise.”

Thomas was asked why he bothered to play a practice round with DeChambeau. Wouldn’t it be better for his psyche to avoid the image of DeChambeau’s soaring tee shots?

“I mean, I’ve seen it before, it’s not like I’ve never played with him,” Thomas said. “It just confirmed what I already knew.”

And then Thomas added another possibility.

“Once he starts messing with that longer driver and has a little bit more free time,” he said, “then as crazy as it is, he might be able to hit it further.”

DeChambeau has been practicing with a driver that has an 48-inch shaft, the longest allowed in the rules. The standard length on the PGA Tour is about 45 and one-half inches. A longer shaft can mean a higher swing speed and longer shots, although it’s harder to keep the ball traveling straight.

Still, DeChambeau did not rule out unveiling his 48-inch driver this week. As late as Thursday afternoon, he was still testing it on the practice range. With the longer shaft, he had gotten his swing speed up to 144 miles an hour. Most recreational golfers struggle to surpass 90 miles an hour.

“I mean, it looks really promising right now,” DeChambeau said of the driver. “I did not expect it to work yesterday. But it did work yesterday. I’m not 100 percent sure if I’ll put it in play yet.”

So many decisions for the man who has been a focus of all the buzz preceding the 2020 Masters. And then there will be the hundreds of choices DeChambeau will have to make as he lines up putts on the undulating, vexing Augusta National greens, where the tournament has been customarily won or lost.

“It comes down to putting and chipping out here,” he conceded.

Then, it was back to talking about the gargantuan drives. Because nobody talks about 25-yard field goals, 300-foot home runs or 20-foot jump shots.