Australia coach Lisa Alexander remains defiant after their 52-49 Quad Series loss to England in London, saying defeat will only add to their desire at the World Cup.

The beaten-up Diamonds succumbed late to their arch rivals on Monday (AEDT), although the margin was close enough to clinch the four-nation series title on goal differential – not that it improved the mood of a disappointed Alexander. 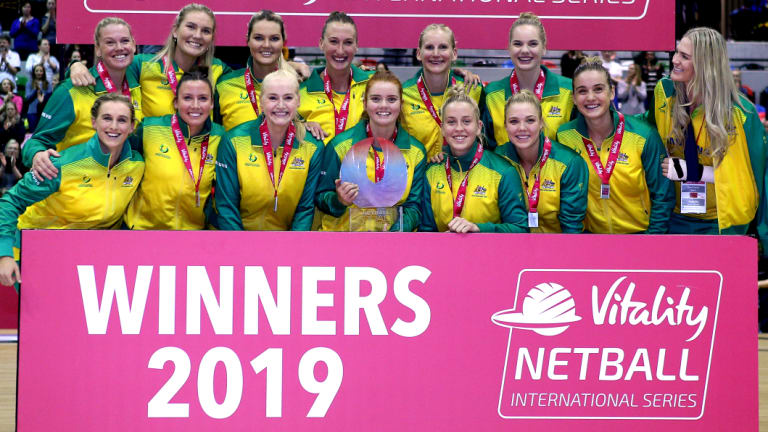 The Diamonds lost to the Roses but won the Quad Series overall.Credit:PA

Desperate to get bragging rights over Roses counterpart Tracey Neville, Alexander said the result exposed weaknesses before the the world champions’ defend their title in England in July.

She also delivered a pointed message to Neville and her Commonwealth Games champions.‘‘You’ve got to understand, everyone’s coming for you England, you’ve got a target on your back,’’ Alexander said.

‘‘We were here to win. We weren’t here to be beaten by the Poms again.

‘‘It’s disappointing, we’ve got to look at ourselves and understand what we need to do.’’

Alexander described winning a third successive Quad Series crown as ‘‘bittersweet’’ but acknowledged the adversity her team faced with a hefty injury toll.

Defensive mainstay Courtney Bruce was ruled out after suffering concussion late in the win over New Zealand 24 hours earlier to join captain and goal shooter Caitlin Bassett and mid-courter Gabi Simpson on the sidelines.

Australia powered to a 14-9 lead at the first break but England responded in the second quarter to lead by three at half-time.

Alexander introduced Browne and crafty shooter Steph Wood for the second half and the Diamonds forged a two-goal lead midway through the final quarter.

However, England were not to be denied. Both teams finished on two wins but Australia clinched the Quad Series courtesy of England’s loss to South Africa, leaving them in need of a five-goal winning margin in their final game.

The Roses are still to win a Quad Series while Australia have won five of the six editions, including the past three.

‘‘A trophy is important and it’s measured across the series, so from that point of view the team hung in there and were tough,’’ Alexander said.

‘‘But we didn’t play our best tonight, other than that first quarter so we’ve got work to do.’’

New Zealand won their first game of the week with a 62-60 defeat of the Proteas after extra time and a golden goal period.

World No.5 South Africa, under former Australian coach Norma Plummer, finished last in the series but have emerged as a possible World Cup force after toppling England 48-45.