Twelve of 21 brains donated by players of sports prone to repetitive head injury that were assessed by the Australian Sports Brain Bank were found to have the degenerative brain disease chronic traumatic encephalopathy (CTE), and all but one brain showed some form of neurodegeneration, in findings to be published in the Medical Journal of Australia.

Defined by the authors as a neurodegenerative tauopathy caused by repetitive head injury, CTE has been linked to neuropsychological problems including mood and behavioural symptoms and cognitive impairment. 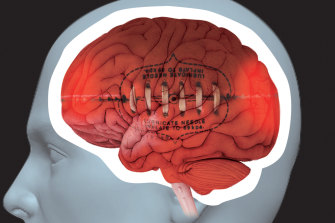 More research is being done into CTE and concussion in recent years.Credit:Jo Gay

There has been a focus on concussion and CTE in recent years as more is discovered about the long-term effects of head injuries, particularly among professional athletes in contact sports.

The head of the Australian Sports Brain Bank, Associate Professor Michael Buckland, described the results of the study as “disturbing” and called for policymakers to acknowledge the risks attached to playing contact sports such as Australian rules football and rugby.

“I would love to see codes not only have a concussion policy but also a policy on CTE minimisation,” Buckland said.

“That should be based on two principles, which is reducing cumulative lifetime exposure to head knocks and increasing the age of first exposure. Both of those seem to be most important.”

All 21 brain donors had been involved in sports with risks of repetitive head injury. Seventeen of the donors played either Australian rules football, rugby league or rugby union, where concussion remains a constant concern. The paper said that CTE was more prevalent in donors with professional careers but was also found in non-professionals and people who had played sport under modern concussion protocols.

Although at 21 the sample size was small and ascertainment bias was inevitable because researchers generally received brains from people who were concerned about the potential effect of knocks, researchers said the data showed why the concern was real.

“All but one donor exhibited some form of neurodegeneration, and 13 had two or more neurodegenerative pathologies. The most frequent neuropathology was CTE: 12 donors had pathognomonic CTE lesions.

“CTE was identified in the brains of older former professionals with long playing careers, but also in younger, non-professional sportsmen and in recent professionals who had played under modern concussion guidelines.”

Three donors with CTE were under 35 years old, with the average age of those with CTE lower than those without the presence of CTE.

AFL Legend Graham “Polly” Farmer, who died in 2019 aged 84, was the first VFL/AFL player diagnosed with CTE. The Australian Sports Brain Bank also found the presence of CTE in the brains of former players Danny Frawley, Shane Tuck and Murray Weideman after they died.

Frawley and Tuck both died by suicide with the researchers identifying that six of the 12 donors with CTE and one of nine without CTE had died by suicide.

Associate Professor Michael Buckland, a neuropathologist at the Royal Prince Alfred Hospital and the University of Sydney, said he had seen 1000 brains in the past 12 years and detected different outcomes according to people’s backgrounds.

“I never saw CTE until I started looking at retired sportspeople,” Buckland said.

“We know that these repetitive head knocks or repetitive brain injuries aren’t just restricted to contact sports, but they make up a large proportion of people exposed to them.”

The study reported on the 21 brains assessed up until March 2021. Another 15 have been assessed since that time and about 350 brains have been pledged for future research. Buckland said he hoped they would create a way to test for the presence of CTE in brains before people died in his lifetime.

The AFL has had at least 30 players retire due to concussion in the past decade. Concussion advocate Peter Jess has called on the AFL to introduce a concussion passport, greater testing regimes and an improved medical response when a player is concussed.

The league has attempted to crack down on head-high contact and introduced a 12-day concussion protocol at the start of last season with players now sidelined for a minimum 12 days if they are concussed in a game or at training. They have also appointed a head of concussion, Associate Professor Catherine Willmott, and pledged to invest $2.5 million per annum over the next 10 years in concussion research.

The AFL has appointed former Bulldogs president Peter Gordon to investigate the feasibility of a concussion compensation and support fund, while a WorkSafe investigation into the league’s handling of concussion is ongoing.

Keep up to date with the best AFL coverage in the country. Sign up for the Real Footy newsletter.