MELBOURNE, Australia — Novak Djokovic will play his longtime rival Rafael Nadal for the Australian Open title after cruising through a remarkably easy three-set win in the semifinals Friday night.

The top-ranked player on the men’s tennis tour and a six-time winner in Melbourne, Djokovic walked to the court as the heavy favorite. Pouille had reached the semifinals after a surprising run that came on the heels of a difficult year in which his top 10 ranking dipped to No. 31.

Djokovic confidently lived up to his favored status, backed by a strong serve, powerfully deep returns, sharp angles, and his ability to track down virtually every offensive shot from his French opponent. In the first set, he made just one unforced error. He made only a few more over the rest of the match, which lasted one hour and 23 minutes.

Afterward, in an on-court TV interview, Djokovic assessed the performance as, “one of the best matched I ever had on this court, definitely.”

Now comes the hard part. To win a record seventh singles title at the Australian Open, Djokovic must beat Nadal, who won his only Australian Open title a decade ago.

Over the past two weeks, the Spaniard has played some of the sharpest hardcourt tennis of his sterling career. On Thursday, to book his own place in the final, he beat back the Greek upstart Stefanos Tsitsipas, who had earlier defeated Roger Federer. Nadal, the No. 2 seed in Melbourne, has not lost a set. 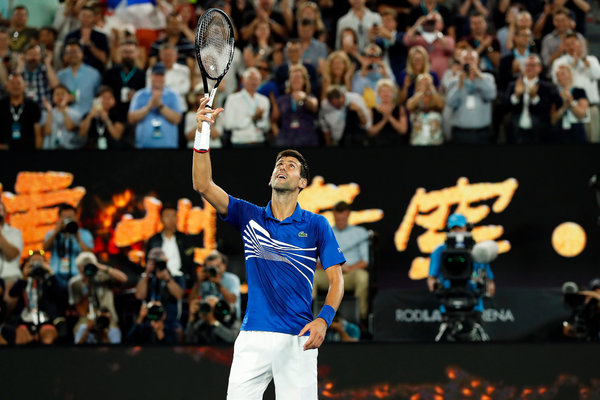 Nadal and Djokovic will forever be paired in the history books. The Serbian leads their head-to-head record, with 27 wins against 25 losses. Many of their matches have gone to the final set and have been marked by grueling, highlight-reel points.

Djokovic won the last time they played in Melbourne, emerging victorious after a punishing five hours and 53 minutes on court, a duration that remains the longest in Grand Slam finals history.

Both players have overcome recent difficulty. Nadal has struggled to withstand the rigors of the joint-pounding, hardcourt tennis that most professional events are played on.

He arrived in Melbourne with low expectations, having taking a hiatus from the tour after the United States Open in September, where he had withdrawn in the semifinals, citing a leg injury. In November, he had ankle surgery.

Dogged by an injured elbow at last year’s Australian Open, Djokovic was routed in the quarterfinals by Chung Hyeon, a young South Korean ranked No. 58 at the time.

The loss was one of a batch of stunning upsets he suffered in major championships after winning Wimbledon in 2016, prompting questions about whether he would ever return to form.

But last summer, aided by an elbow surgery, his health returned. And so did his steel-trap resolve. He won Wimbledon, followed that with a 14th major title at a sweltering United States Open, and shot again to the top of the men’s rankings.

Now, again facing Nadal in what will be a highly anticipated final on Sunday, he will try to win his third straight Grand Slam.