After eight rounds, no Victorian-based team has left Perth’s Optus Stadium with the four premiership points.

St Kilda was the fourth to try, but were blown away early by Fremantle before losing by 30 points after a spirited second-half comeback.

The Saints had trailed by 43 points in the third term and got the margin back to within 13 midway through the final term. But again, poor skills when kicking at goal hurt and they wasted several opportunities to pinch the win. 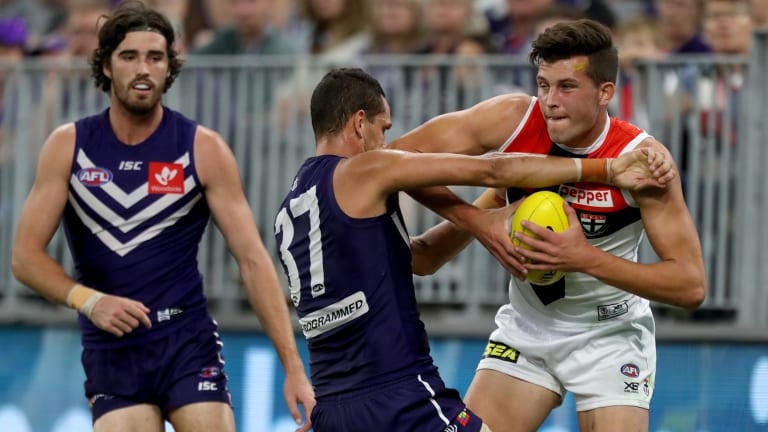 Sydney, in round one against West Coast, are the only team to have travelled west and been victorious.

Fremantle’s off-field issues have been scrutinised much more than their 77-point loss to Richmond in round seven. But the club will be hoping that Friday’s joint press conference with Ross Lyon, Steve Rosich and Dale Alcock will put an end to the harassment saga shadowing their coach.

Even without Michael Walters, Matthew Taberner, Brad Hill, Stephen Hill (a late withdrawal with quad tightness) and Nathan Wilson, they were able to dominate early against the Saints. They kicked seven of the first eight goals.

St Kilda’s 2018 scoring and accuracy issues didn’t seem to be any better on the western side of the Nullarbor.

Since beating the Brisbane Lions in round one, they have managed 10 goals just once in a game (10.13 in their draw against GWS in round five). They took 24 minutes to kick their first goal last night.

They’d had two shots prior to that goal from Sam Gilbert, but both went out of bounds on the full.

They had 14 inside 50s in the opening term to the Dockers 13, but trailed by 12 points. They went goalless in the second quarter and with 1.5 on the board had their lowest half-time score since 2002.

With three of their players who have kicked goals this year not in Perth (Paddy McCartin and Ben Long with six goals and Josh Bruce, four) they needed someone to step up. That player didn’t appear. 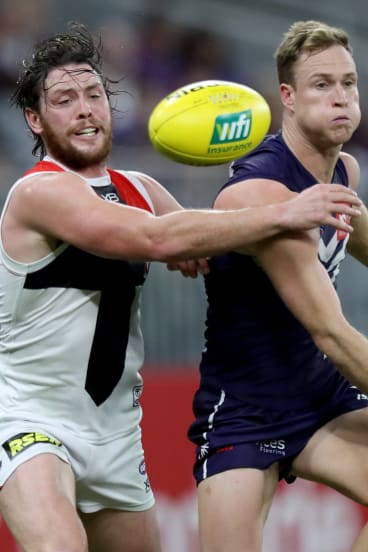 It was a topsy-turvy match in Perth.

Tim Membrey wasted his chances, and three of those five points from the opening two terms came from his boot. He added 0.2 in the final term to finish with 1.5.

Twice, at the start of the fourth quarter, he had chances to get the margin back to less than two kicks.

The Saints will take some confidence from their second half when they play Collingwood at Etihad Stadium next Saturday night.

Going on form, Fremantle should have had the game wrapped up after two quarters.

Jake Carlisle was forced out of the game 10 minutes into the second term. He had been the main beneficiary of the Saints’ playing an extra player in defence, with five marks and seven disposals. But he looked to cop a concussion when he was rolled over in a tackle and he hit his head on Nat Fyfe’s knee.

There didn’t seem to be anything the 2015 Brownlow medallist could do to avoid the contact, but Carlisle couldn’t return to the field.

Fyfe’s head clash with Seb Ross in the third term is also likely to be scrutinised.

Fyfe finished with 36 touches, 25 of them contested. He had 13 clearances and a goal as well. Four Dockers finished with more than 30 touches. The others were Connor Blakely (35), Ed Langdon (33) and Lachie Neale (32).

Luke Dunstan was the only Saint to reach 30, but debutant Ed Phillips impressed with 24 and five tackles.