A television documentary entitled Headgear to Helmets – Rugby League in Australia during WW1, will be aired on Remembrance Day, the 100th anniversary of the end of the bloody conflict.

Produced by the NRL’s resident historian, Terry Williams, it relates individual stories of players within the overall context of the war’s impact on the rugby league community in Australia, through a mix of interviews with researchers and descendants of some of those players who served. 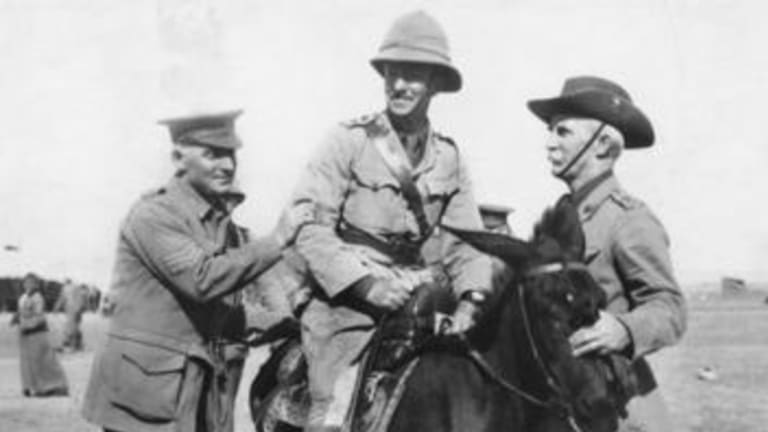 Using primary sources, including letters from the front, diaries, battle film, photos from the trenches, as well as wartime posters and pamphlets and current newspaper accounts, Williams tells an absorbing story.

It has taken 100 years for rugby league to mount a strong defence to the myth the new professional code, which began in 1908, was less patriotic than rugby union which suspended its competition during the war years.

Rugby union was already in a parlous state at the outbreak of World War 1 in 1914, whereas rugby league was attracting huge crowds.

Williams acknowledges the well-known truth that the transfer of many top union players, such as Dally Messenger, gave rugby league instant popularity but he also reveals that many “lilywhites” joined the newly professional code when their competition was suspended and did not serve.

Many went to war because they sought adventure. In fact, a contemporary journalist described war as “the greatest game of all.” One of rugby league’s early administrators, Horrie Miller, appropriated the phrase for rugby league.

While Miller stayed at home, the documentary devotes a few precious moments in its 48-minute run to his predecessor, Ted Larkin, who did serve.

Larkin is a hero to many amateur league historians. A member of the first All Australian rugby union team to play New Zealand in 1903, he became the NSWRL’s first full-time secretary. He was also the first Labor member of parliament to win a seat on Sydney’s north shore. He resigned his league post because he considered it hypocritical to encourage players to enlist while not fighting himself. He
was killed on the original Anzac Day, one hour after coming ashore at Gallipoli.

Frank Burge, a recently anointed Immortal who played for Glebe from 1911-22, sought to enlist in 1916 but was refused because he had a speech impediment.

Burge, a lock, scored an average of a try a game and it took three men to tackle him but it was stutter of his words, rather than that of the German machine guns, which bizarrely concerned the army.

George Duffin was a member of Wests’ 1908 foundation team and died on August 22, 1915, attacking Hill 60 with the 18 th Battalion. At reunions of the Magpies, I sometimes heard the old timers refer to Hill 60 as a futile training drill.

Headgear to Helmets solved the ancient mystery for me. The 18th Battalion was told to attack the fortified hill with bayonets and bombs but had none of the latter. Williams quotes celebrated historian, Les Carlyon: “there was something contemptible about the way 18th Battalion was sent out to die.”

Duffin has no known grave.

Two Victoria Cross winners from World War 1 were rugby league players.  Sergeant George Howe, a player from Enfield Federals club in Magpie territory, climbed a parapet and bombed and bayoneted a German nest, while severely wounded. His deed, according to the Sydney Morning Herald, “was witnessed by an entire battalion.”

Paddy Bugden, a surname familiar to St George supporters, was the son of a NSW north coast publican. A photo shows him as a member of an early 1900s Billinudgel team. He won his VC while saving the life of several mates but died for his courage. The documentary poignantly quotes from a letter he wrote home, saying that he “longed to serve behind the bar once more.”

Pictured are members of the 1921 Kangaroo tour, including the Roosters’ Jack “Bluey” Watkins- who had earlier served- visiting Budgen’s grave in France.

Williams does not ignore the social and political divisions of the war and notes that when Australia’s Prime Minister, Billy Hughes, visited Warwick, Queensland on a tour promoting the conscription referendum, he was hit with eggs. The two egg throwers were Brosnans, the same lineage as Wayne Bennett.

Bennett’s voice is not in the documentary but many of the game’s recent champions are, including Nathan Hindmarsh who introduces it. His great grand grandfather served.

Headgear to Helmets will be shown on nrl.com on Sunday.