Best known for the flair, skill and character that enabled them to win the 1992 European Championship in stunning fashion, a more dogged, determined Denmark led by Christian Eriksen will arrive in Russia hoping to make a similar impact at the World Cup. 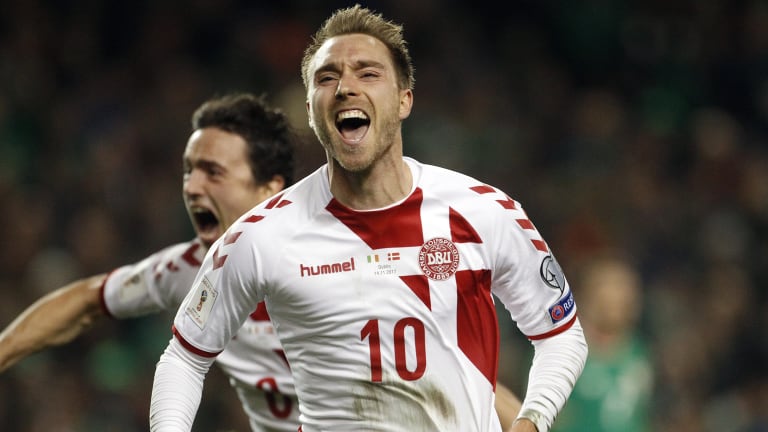 Up against Peru, Australia and France in Group C, Denmark will fancy their chances of making it to the knockout stages, and perhaps even beyond the quarter-finals of the World Cup for the first time.

The Danes have gone through a rapid transformation following the departure of former coach Morten Olsen, who remained true to the nation's ideal of slick passing football in his decade-and-a-half at the helm that ended in 2015.

Age Hareide has since taken over and the gruff Norwegian wasted no time in rolling up his sleeves and instilling a more pragmatic approach.

Olsen's team disappointed in the 2010 finals in South Africa and missed out completely on Brazil four years later, and though Hareide has yet to solve all their problems, their 5-1 aggregate playoff thrashing of Ireland suggests he is on the right path.

In playmaker Eriksen they have one of the most talented players who will grace the World Cup but rather than stringing together intricate passes, Denmark are more likely to play long balls out of defence and start attacks further up the field.

Hareide's ability to organise a defence against top-level opposition was honed in the Champions League at the helm of Swedish side Malmo, and it has given Eriksen the freedom he needs to create.

The 26-year-old repaid his coach with superb performances in qualifying, culminating in a hat-trick in Ireland that secured qualification after they finished second to Poland in qualifying Group E.

Centre-back Simon Kjaer led a miserly defence that conceded only eight goals in qualifying but despite a 4-0 thrashing of group winners Poland their attack often misfired, especially against nations they would be expected to beat.

With striker Nicklas Bendtner rediscovering his form at Rosenborg in Norway and players such as winger Pione Sisto, Viktor Fischer and Andreas Cornelius to call upon, the Danes have the firepower to trouble any side.

But it will be up to Hareide to come up with a recipe for success if they are to make the deep run in the tournament they are capable of.