PORT ST. LUCIE, Fla. — Dominic Smith, the somnolent first baseman for the Mets, strapped a new sleep apnea mask over his hair on a recent night, unfurled a five-foot hose affixed to an airway pressure machine and pressed the power button.

Air streamed into his mouth and nose to force his airways open with pressure from the mask. He spoke of the apparatus like a new glove.

“Still breaking it in,” he said, lying on his back in a king-size bed at his rental house.

While this mask was new, Smith’s struggle to get a good night’s sleep dates back to high school. He learned he had sleep apnea in 2016 while in Class AA.

But when Smith reported to spring training this season ready to compete for the Mets’ starting first-base job, Brian Chicklo, the Mets’ head trainer, asked Smith about his repeated awakening and pauses in breathing at night, as well as his chronic sleepiness during the day. Chicklo also inquired about the mask. Smith, drafted No. 11 overall by the Mets in 2013, had not worn it in more than a year.

“I was just really focused on working out,” he said. “I didn’t make it a priority.”

The Mets knew that was a problem. After the team reviewed Smith’s performance last season, when he posted nearly as many fielding errors (four) as home runs (five) in 56 major league games, Chicklo arranged for Smith to undergo a sleep study at a local test site upon arrival in camp.

Smith reported to the site at 6 p.m. after a daylong workout. In a small room with a bed, television, desk and chair, a nurse attached six monitoring wires to his head, two to his chest, two to each leg and one on his finger.

After he managed to drift off, the test revealed that Smith stopped breathing 90 times every hour, a sign of sleep apnea. A doctor explained that severe cases start at 30 stoppages. 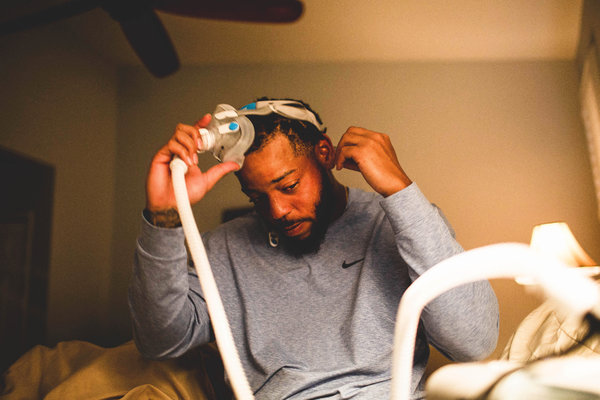 Smith, 23, started using the mask again a month ago to help him breathe at night and get more rest. He is going to need it; he is locked in a four-man race to start at first base this season. His spring awakening — a .400 batting average, 8 R.B.I. and alert play in the field heading into Sunday’s game — has turned heads, but he still faces stiff competition: The Mets’ top prospect, Pete Alonso, commenced the position battle by hitting a home run in his first at-bat of Grapefruit League play.

Last year, Manager Mickey Callaway scratched Smith from the lineup in the first spring game because Smith showed up late for the team’s 8:45 a.m. meeting. His untreated sleep apnea kept him drowsy and languishing in bed in the mornings instead of out the door. Now, Smith arrives at the facility by 6:15 a.m. most days. His bat is awake, as well.

“All of a sudden, we have a guy that’s unconscious out there,” Callaway said.

Smith has known for a while that he needed a jolt, but his handling of his sleep problems had been inconsistent. He first noticed breathing problems on New Year’s night in 2013, when he was a senior at Junipero Serra High School near Los Angeles. He woke up in the middle of the night and went into the room where his mother, Yvette LaFleur, was asleep.

“I swear I was just suffocating,” he said.

Smith came from a long line of snorers skeptical of doctors. He originally thought it was a tonsil issue, and was prescribed antibiotics. He did not even know what sleep apnea was until a doctor told him after he was drafted in 2013 that he might have a “mild case.”

Even then, Smith didn’t make much of the diagnosis because he believed it would not affect him until at least middle age. On bus rides in rookie leagues and Class A over the next two years, he would fall asleep during conversations with teammates, who recorded his loud snoring. Smith could not recall where or when he had fallen asleep. Research studies have linked sleep apnea to memory loss and cognitive decline, as well.

“It’s to the point where people don’t even record me no more,” he said. “Planes, I was out. Hotel room, out. I was like, dang, we were just chilling. I don’t know how I fell asleep. What happened? Legit amnesia.”

The sleeping issue was finally addressed when he reached Class AA Binghamton in 2016. He missed one game with the Rumble Ponies for an overnight sleep study and was told he had sleep apnea. He was given a continuous positive airway pressure machine, known as a CPAP, to help.

He used it for about a year before lapsing. During his professional career, weight had also become an issue. When he was drafted out of high school, he weighed 185 pounds and stood just under six feet tall. By 2016, he tipped the scales at 260 pounds. Weight gain has been linked to sleep apnea, and Smith noted that eating fast food on 3 a.m. bus rides through the minor leagues did not help his condition. Before entering camp last year, Smith adapted to a more disciplined diet. Out went pizza; in came brown rice and broccoli. Having lost weight, Smith believed he no longer needed the mask. For stimulation, he consumed coffee and 5-Hour Energy shots and experimented with workout supplements like P4 and Fast Twitch.

Still, he sometimes fell asleep at the wheel while stopped at red lights.

Smith also noted a disruption in his insurance coverage. When he was first promoted to the major leagues in August 2017, his insurance carrier changed from Blue Cross Blue Shield, which covered his first sleep apnea machine, to Aetna, which he said did not cover it. Focused on workouts, he pushed off finding a resolution and sought alternate sources of energy like coffee. He often crashed.

“By the time the game was over, I was so exhausted,” he said.

Consistency remains the greatest question about Smith. Brodie Van Wagenen, the team’s new general manager, and members of his front office detected an ebb in Smith’s performance early this spring when Smith struck out three times in a game. Afterward, in the clubhouse, Van Wagenen approached Smith at his locker.

“You didn’t wear your mask last night, did you?” Van Wagenen said.

Smith, who must use the mask at least four times a week for approximately five hours or his health care provider will stop paying for it, acknowledged that he had not. The mask, after all, can be irritating, and it requires him to sleep on his back instead of his stomach or side, as he is used to.

Van Wagenen told him that his presence at the plate was noticeably listless that day.

“I had no concentration,” Smith said.

The previous day, the team’s bus had returned to the Mets’ facility around 9 p.m. after a game in Lakeland 126 miles away. Smith, a Los Angeles native, retired to his residence in a gated community, turned on his television and started to watch the Lakers game. By the end of the first quarter, Smith had fallen asleep before putting on his mask.

When he told Van Wagenen, the general manager recommended Smith set an alarm on his phone that would wake him up around 11 p.m. to ensure that he did not miss an entire sleep cycle.

The next day, Smith hit a three-run home run and went 3 for 4 from the plate.

“It is pretty remarkable,” Van Wagenen said. “Look at what his potential is.”

Smith maintained that he is ready for all that Alonso and the season bring. In preparing during the off-season, Smith balanced football-style workouts and bench pressing to strengthen his upper body with yoga to tighten his core. He also believes encouraging words from Chili Davis, the Mets’ new hitting coach, and Callaway have inspired him to perform with confidence this spring.

“A lot of times, we get stuck in this pattern of feeling a certain way, and we think it is normal,” Smith said. “We don’t think much of it.”

Smith will require close monitoring, but he seems to have finally embraced his sleep struggle. On a recent night, he returned to his house three miles from the team’s facility. The blinds were drawn in his bedroom at sunset.

He referred to himself as “the snooze king” as he set his alarm clock.