When Michael Jordan retired in October of 1993, the news was carried on front pages all around the world. From Kenya to China to Argentina and anywhere else that had ever seen a basketball game, the tributes were befitting an athlete of his otherwordly status.

First, the obvious: Johnathan Thurston is no Michael Jordan, although the achievements in his sport of rugby league paint a statistical picture of a player that easily ranks among the greatest in history. 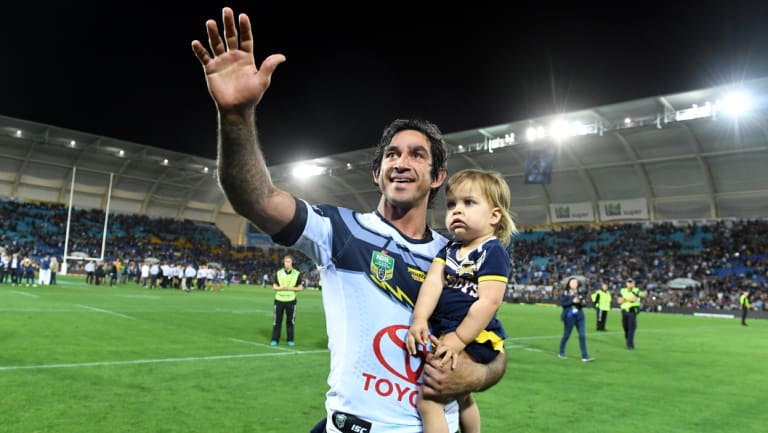 Loss to the game: Johnathan Thurston farewells the crowd after his final NRL match.

But a French front page about Jordan's retirement said everything you need to know about Thurston's final game. 'Don't Leave Us,' urged L'Equipe of Jordan. That's truly how it felt as Thurston signed off on Saturday afternoon in North Queensland's 30-26 win over the Titans.

This was a celebration, yes. There seemed to be more Cowboys fans than Titans fans as CBUS Super Stadium enjoyed a rare sell-out crowd. They really had come from everywhere to breathe in Thurston's greatness for one final show.

Yet there was also a feeling of melancholy as the reality of Thurston's departure slowly took shape and the clock marched onwards. Of course, they all give it away in the end but this time, it felt like rugby league had lost much more than just a wonderful footballer. 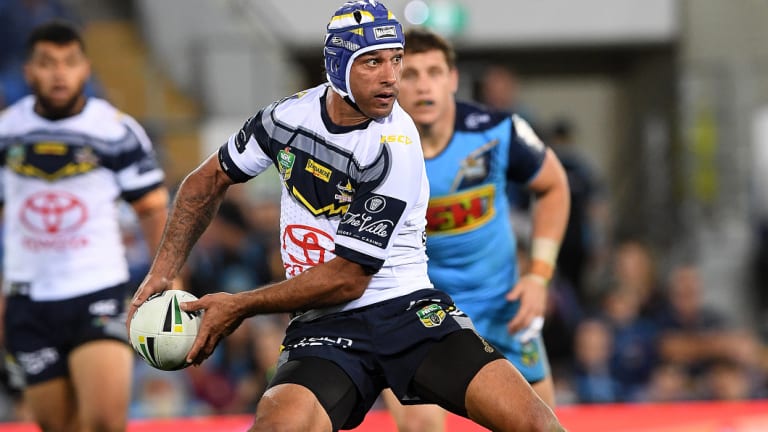 Always inspired: Johnathan Thurston directs play against the Titans with the same aplomb that has characterised his career.

The week of tributes had been immense and would have surely been overwhelming for Thurston, who at 35 poured every fibre of his being into his final season at the Cowboys, even if they finished at the opposite end of the table then most predicted.

Everybody seemed to be telling their Thurston stories; the ones about him being too small to make it in the top grade, the ones about which clubs tried and failed to poach him when they worked out he wasn't that bad at all, the ones about his generosity with fans, the ones about how his devotion off the field, especially within Indigenous communities, had made him a hero far beyond the expanses of a football stadium. 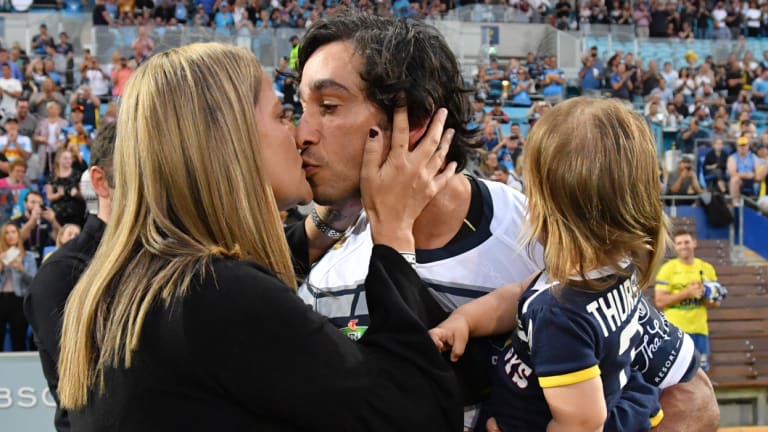 Sealed with a kiss: Johnathan Thurston with wife Samantha before his final match.

This would be game 323 in the NRL, a figure buttressed by 37 Origins, 38 Tests, three Golden Boots, a Clive Churchill, four Dally Ms, a premiership when he was just a kid at the Bulldogs in 2004 and that premiership for the Cowboys in 2015, won via the greatest grand final of them all.

He wanted to end his story with a win, because above all, that has been Thurston's signature on the football field. Never the smoothest, fastest or flashiest of playmakers, he compensated with an unrivalled toughness and an insatiable desire to carry teams over the line. He had a freakish ability to do just that.

First, he had to get on the field. As he emerged from the tunnel, he was greeted by parents Graham and Debbie, the latter with tears streaming down her face. Who knew Sunday morning footy at Souths Sunnybank in Brisbane would end up here.

His wife Sam was also there, along with daughters Frankie, Charlie and Lillie. He was enjoying the hugs and kisses so much he had to look twice to notice the entire Cowboys line-up running past him wearing replicas of his headgear.

Cameron Smith was there as well. The Storm captain had flown up to surprise his close friend. They had played together since their early teens and as NRL stars, would be at the heart of some of the greatest representative sides every assembled. 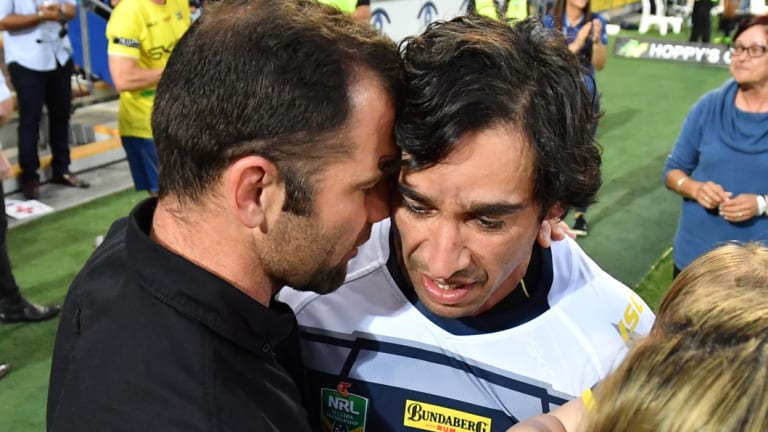 Old boys: Cameron Smith whispers to Johnathan Thurston in a touching gesture on the Gold Coast.

The Titans had planned a surprise as well. On the stroke of seven minutes, the crowd had been told to stand and applaud. Alas, Titans fullback AJ Brimson decided to score precisely at that moment and the opportunity was lost. It's the thought that counts.

Things weren't exactly going to plan for the Cowboys, although in some way an imperfect ending seemed to be the ideal finale to an imperfect season. It has been clear for months that Thurston would have no finals fairytale. Still, a win would have been a nice touch.

At half-time, the Cowboys trailed 18-6 although Thurston was intent on making his mark. Deep in the half, he somehow pulverised giant Titans prop Ryan James, picking him up and burying him into the turf. It might have been the greatest front-on hit of his entire career. 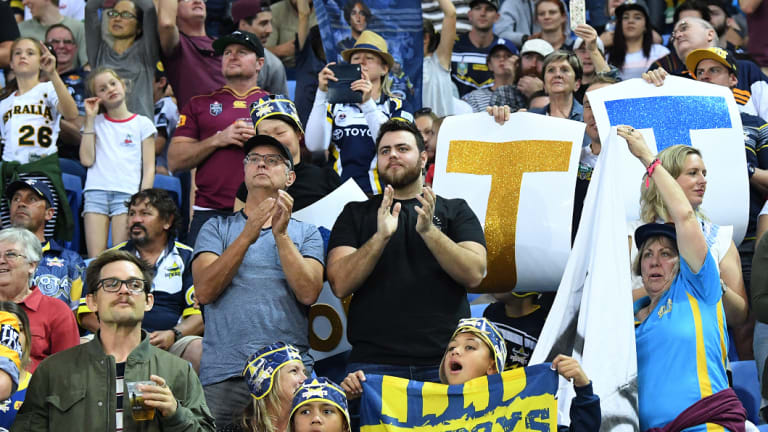 Standing ovation: Fans applaud Johnathan Thurston at the seven-minute mark of the game.

Ben Hampton crossed for the Cowboys three minutes into the second half and again after 55 minutes, making it 20-18 to the Titans. This match meant nothing to the structure of the finals but was starting to mean everything to the Cowboys and their retiring general.

Could there be one more show-and-go to win it? Perhaps. In the meantime, Thurston was terrorising the Titans with his short-kicking game, competing so hard you could have sworn the fate of humanity depended on his ability to earn repeat sets.

He chipped one over for his faithful wingman Gavin Cooper, who plucked it from the atmosphere to make it nine tries in as many games. When Gideon Gela-Mosby helped himself to an intercept minutes later, Thurston would get the final win he so richly deserved.

He looked exhausted after the siren, embracing Matt Scott then slowly doing the rounds of his teammates, rivals and referees, embracing all and exchanging well-wishes.

Farewell Johnathan Thurston. He might well be the best we've ever seen. Don't Leave Us.