And you thought Jeff Fenech playing for Parramatta in the late 80s was big news. Imagine then, if you will, Usain Bolt, the greatest track athlete that has ever lived, sauntering down Mann St in Gosford to share the mad love, probably hand out some Puma kit, in between training sessions with the Mariners by day and DJ commitments at the RSL well into the night.

Can he win their hearts? At 31, with his Olympic career now over and new dreams beckoning, it would be a tale of emotion and warmth. Sadly, Bolt doesn't appear to be particularly good at football, which stands to be a significant hurdle. Hurdles were never his thing. 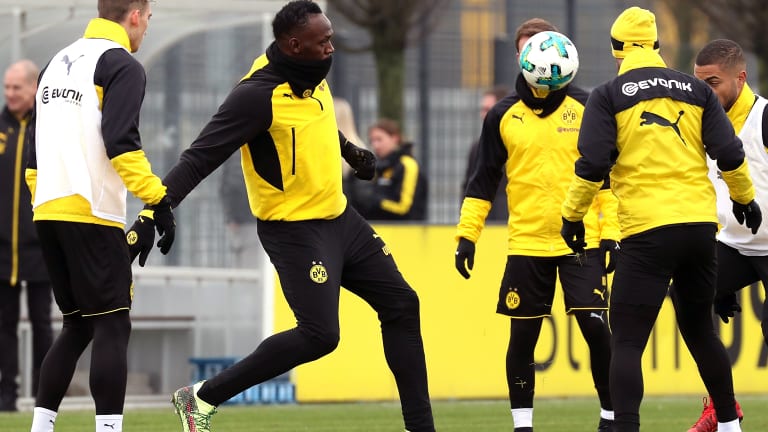 Not his first: Usain Bolt has trained with the likes of Bundesliga giants Borussia Dortmund.

You can't fault the Mariners for trying their luck with Bolt. The  mere mention of his name has the A-League in headlines around the world. He's one of the greatest athletes in history and, with Michael Phelps, one of the icons of the modern Olympiad.

When he made a (paid) appearance at the recent Commonwealth Games on the Gold Coast in April, Bolt spoke about his love of football and his ambition to play for a living. He's always idolised Manchester United, and that remains his dream destination.

"I'm still in the early stage. But I'm very serious about playing football and putting in the work. I'm working with Dortmund at this point and they are really helping me to figure out in which direction I need to go and where to improve if I'm really going to do this," Bolt said.

And to hose down the rampant rumours: "I'm not linked to Manchester United. Hopefully in the future."

Does the road to Old Trafford start on the picturesque Central Coast? At the moment, the ground looks shaky. A trial remains some sort of possibility but any contract would require a substantial injection of funds from the FFA, who don't seem particularly keen to raid the vault for a stunt.

With his manager suggesting that the Mariners were just one of a few options, it's hard to envisage Bolt trialling in Australia if there was little chance of a contract at the end his footballing probation period.

If there was, could Bolt guarantee he was available for the entire home-and-away season, or would he make guest appearances here and there between lucrative commitments with sponsors overseas?

As much fun that can be had with the idea of Bolt in a Mariners jersey, those charged with running the game in Australia flirt with the very real danger of making a league that yearns for credibility a rolling punchline.

The initial crowds would likely be strong but if Bolt turned out to be as good at football as a late-career Paul Gascoigne was at sprinting, then who knows how long the appeal would last.

Barring a drastic spike in Bolt's football skills, which have been on show at clubs like Borussia Dortmund in Germany, there's a better chance the Jamaican will be running the 100m in Tokyo than trying to extract a point from an away trip to Wellington.