The ACT Brumbies are set to unleash the biggest second-row combination in Super Rugby history for the fight to keep their season alive on Saturday night.

Identical twin brothers Rory and Richie Arnold are expected to be named in the Brumbies' starting XV on Thursday for the clash against the NSW Waratahs this weekend. 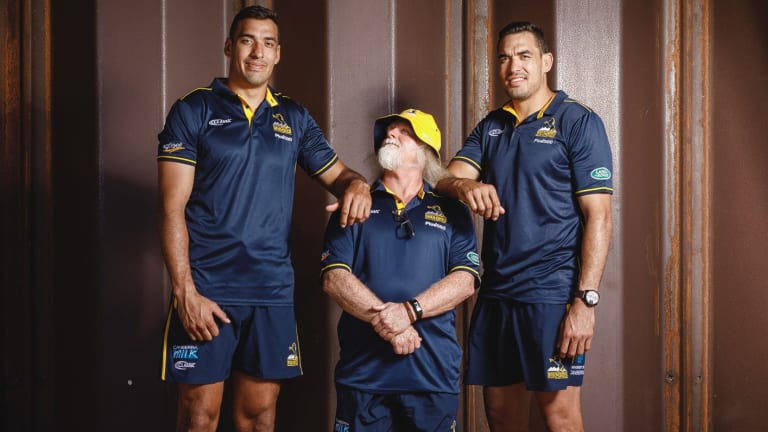 Brumbies twins Richie (left) and Rory Arnold (right) are set to start together for the first time.

It will be the first time the siblings, who are both 208 centimetres tall, have started a game together and they will be a part of a beefed-up Brumbies forward pack for the Australian derby contest.

Scott Sio is in contention to make his comeback from a shoulder injury and co-captain Sam Carter has overcome a back problem to add depth and power to the Brumbies' pack.

An injury to Tom Cusack and the fact Carter has played just 40 minutes in the past six weeks will force the Brumbies into a reshuffle to allow the Arnold twins to start in the second row and Blake Enever to shift to blindside flanker.

Richie Arnold moved to Canberra this year to link with Rory after the demise of the Western Force, paving the way for them to play together for the first time since they were plucked from a pub to play club rugby for Murwillumbah in 2010.

Former Waratah Lachlan McCaffrey is also in back-row selection contention after recovering from a back injury and is set to compete with Enever for the No. 6 jersey.

"Boys are obviously curious [about the finals] because that's the aim of every team, but as a squad and team we haven't spoken about it," McCaffrey said.

"Blake has been playing unbelievable the past five or six weeks, I've been so impressed with how he's been going and he's been one of our best players.

"Richie and Rory really played well together [last week] and we might look to really take on the Waratahs physically through the middle if we go that way. I just have to contribute as best I can if that's five minutes or whatever."

Brumbies coach Dan McKellar is weighing up his selection options, with Sio and Carter to make their comebacks if they get through training on Thursday.

The Brumbies are likely to stick with the game back line combinations they have been using for the past seven weeks, but they'll need to score plenty of tries if they want force their way into the play-offs.

The Brumbies need to beat the Waratahs and secure a bonus point for winning by three tries or more to make the finals for a sixth consecutive year, but even then it might not be enough to sneak into the top eight.

They also need the Melbourne Rebels to lose by more than seven points against the Otago Highlanders and for the Durban Sharks to lose against the Argentina Jaguares on Sunday morning.