The 19-year-old believes his engine-room game time is worth its weight in gold, as he embarks on his second pre-season at the highest level.

Dow has returned to Princes Park six kilograms bigger and stronger and plans to follow in the footsteps of former and current captains Marc Murphy and Patrick Cripps … literally.

Dow has made it his pre-season fixation to follow around Murphy and Cripps, both on and off the training track.

“I watch him (Murphy) recover, see his tips about nutrition, watch his training standards. 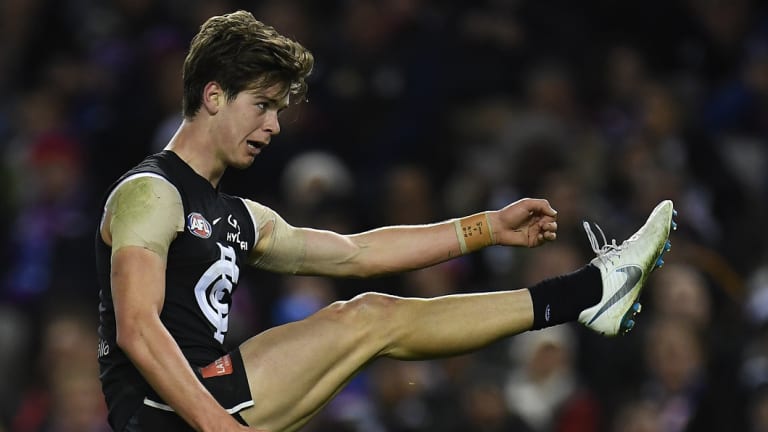 Paddy Dow is hoping to kick on with the Blues.Credit:AAP

“Murph has always been so professional in the way he rehabilitates and recovers. It’s something I want to add to my game.”

Playing in a team crying out for midfield depth, Dow found himself at more centre bounces than any other player taken in last year’s draft.

No. 1 pick Cam Rayner at the Brisbane Lions was close behind with 144, with the next best below 100.

While it was a tough ask in his first year, Dow is hoping it will fast-track his development en route to becoming an elite AFL midfielder.

“The experience to be able to go up against players like Dusty, Dangerfield, Gary Ablett, Robbie Gray, playing on someone like that, you learn so much off them.

“And also playing alongside your teammates in there. Players like Crippa, Murph, Ed Curnow, Samo (Petrevski-Seton) and Zac Fisher as well … you learn heaps.

“It’s worth its weight in gold, gaining that experience in there.”

Dow is part of the next wave of potential stars at Carlton.

It doesn’t seem long ago that top end picks Matthew Kreuzer, Bryce Gibbs and Murphy were the next crop of talent for the Blues.

But their tilt at a possible premiership didn’t reach the expected heights.

Kreuzer and Murphy will both soon be in their 30s and Gibbs has returned to Adelaide.

“We’ve got this phrase at the club: honour the past, but own the future,” Dow said.

“Yes, we’ve got the most premierships along with Essendon. But now it’s up to our group here now, all the young players but also the experienced ones, to own this year, the future and take control of what we’ve got coming for us.”

And while new high performance boss Andrew Russell has made a strong start to his campaign at Carlton, the Blues began their fitness regime in the off-season.

A chart was sent to the playing list’s group chat, where each player could see where everyone else was taking holidays.

The point? If you were geographically close enough to another teammate – then find them and train with them.

“In our exit interviews with our welfare team, (player development manager) Craig Millar created this chart after everyone told him where they were going.

“I’m not sure if anyone else does it,” said Dow, who, while relaxing in Noosa, referred to the chart and spent time training with fellow youngster Jack Silvagni.

Given the way he presents and the way he played this season, it’s difficult to reconcile that Dow has only been in the AFL system for 11 months.

But the former fresh-faced draftee is embarking on his second pre-season, and he’s noticed a big difference.

“When you’re a first-year draftee, you walk in, you’re there to train hard and earn the respect of  everyone,” Dow reflected.

“But walking in this year … your whole mindset is just to train and get better … you know the people and the system, and now you can just take a lot more ownership for your career.”

And Dow has taken ownership for getting bigger so far this pre-season.

Leaving the club in August following a shoulder injury, the teenager was 78 kilograms.

Meanwhile, Carlton list manager Stephen Silvagni has next week’s draft to concentrate on, where the Blues will once again hold the prized No. 1 pick.

Unless they decide to trade it, the Blues will be selecting midfield gun Sam Walsh, who Dow played with at Vic Country last year.

“He’s a clean ball-user and a great kid. He’s a hard-running mid so it would be a great addition if it goes that way.”