NASHVILLE — For hundreds of college football players, N.F.L. draft day is one of the happiest moments in their career. They are showered with applause, hundreds of thousands of dollars and, if everything goes well, millions more when they sign a second contract down the road.

But for the first time in nearly a decade, the fundamental terms of that second payday are being thrown into question. By the time the most recent batch of rookie contracts expires in several years, the N.F.L. will be governed by a new collective bargaining agreement.

The owners and the players’ union have just begun negotiations to renew the current 10-year labor deal, which expires in two years. While the sides are only starting to make their priorities clear, they are likely to at least consider revising the rookie pay scale, the length of rookie contracts and other elements in the agreement that could affect veterans trying to secure second contracts.

The potential changes stem partly from the decision in 2011 to significantly reduce the amount that top draft picks can earn in their first contract. That decision undercut players like quarterback Cam Newton, the first pick in the 2011 draft, who received about a quarter of the money Sam Bradford did as the quarterback selected with the top pick the year before.

Because N.F.L. teams operate under a salary cap, limiting the value of rookie contracts left more money for veterans’ contracts.

But some players and player advocates are questioning whether the issue of rookie contracts needs to be revisited because the current terms unfairly penalize some of the best young players in the game. 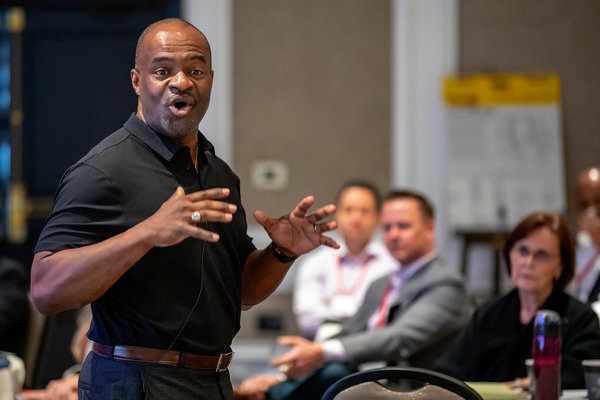 “The rookie scale undervalues the talent of the incoming players,” said Charles Grantham, the director of the Center for Sport Management at Seton Hall and a former N.B.A. union executive. “It’s an attempt to control the costs at entry, and any economist will tell you it caps their future growth.”

Rookie contracts, of course, are only one of many variables at play in the labor negotiations. The biggest issue remains the split in the league’s revenue between owners and players. The percentages differ based on which pot of money is being divided, including the N.F.L.’s television rights deals and money generated by teams in their local markets. But over all, the players receive roughly 47 percent of the league’s revenue.

There also are other issues, including work rules about when teams can contact players in the off-season and how often coaches can hold full-contact practices.

Still, the status of rookie contracts — both their value and their length — is likely to be a big talking point, according to former and current team and union executives, many of whom declined to speak on the record because the negotiations are continuing. The priority, several said, is not so much a player’s first contract but his second.

“The holy grail in any sport is getting to free agency as fast as possible, so cutting any of the obstacles to that is key,” a person involved in the negotiations said. “If you can be as free as possible, then that’s where you can unlock as much value as you can.”

Another wrinkle is the fifth-year option that teams currently hold for first-round draft picks. This option gives teams the ability to hang on to young stars — particularly quarterbacks — for an extra year, but also delay having to give them a bigger second deal.

“I’m sure they would ask for no fifth-year option in the first round,” Charley Casserly, a former general manager, said of the players. But the owners would want to keep that, he said, “mainly for quarterback protection.”

The fifth-year option has created a perverse dynamic because a good player does almost as well financially if he is not drafted in the first round because he is one year closer to a second contract.

That was what happened to Dak Prescott, the quarterback who was disappointed when he was taken in the fourth round by the Dallas Cowboys in 2016. He signed a rookie deal worth about $4 million, far less than the $28 million contract signed by Jared Goff, the Rams’ quarterback, who was chosen first over all that year.

But if the Rams exercise their fifth-year option on Goff, Prescott will end up getting a bigger second payday earlier. The Cowboys may also extend Prescott’s rookie contract before it expires, according to several reports.

“Prescott is in a better position,” said Mike Tannenbaum, a longtime front-office executive with the Jets, the Miami Dolphins and other teams. “He received less money upfront and he might be disappointed on draft day that he didn’t get drafted in the first round. But he comes up for negotiations sooner.”

These numbers suggest that players ought to push for contracts that include a larger percentage of guaranteed money. But securing more guaranteed money for rookies could end up reducing the amount remaining to pay veterans, something the union also must consider.

Marc Tracy contributed to this report from New York.