It’s a match played on a day when the result shouldn’t really matter.

We keep coming back here to Allianz Stadium on ANZAC Day each year. We hear The Last Post, the unbroken minute’s silence among a crowd of 41,142 fans, and it’s an emotional reminder of what’s important and what is not.

But let’s not kid ourselves: the result does matter. 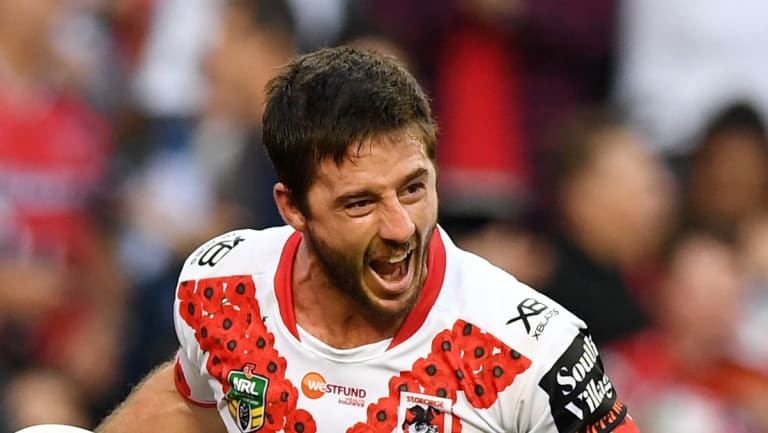 Star: Dragons halfback Ben Hunt had another stunning match for his new club.

In between those tries, though, the half could be best captured in the performances of  Dragons forwards Jack de Belin and Tariq Sims.

Time and time again, de Belin lined up Roosters big man Dylan Napa and drove him into the turf. His cover tackle on Cooper Cronk snuffed out a line-break before the Roosters playmaker could even think about breaking away.

The man with a real mission to nullify Cronk was Sims, who terrorised the Roosters’ big-name signing all afternoon.

What exhausted the Dragons were four sets they had to defend on their own try line, but even in that there was a significant win.

The Roosters grew frustrated at failing to score, so they pointed at the uprights for Latrell Mitchell to kick the penalty goal.

De Belin and Hunt cheered like they’d won the match; a moral victory for the Dragons’ brutal defence that has been the cornerstone of their 7-1 start to the year.

"Taking those two points, we grew after that," McGregor said.

Added Widdop: "I was a little bit surprised when they did it. We took it as a positive: they couldn't break us."

Early in the second half, Widdop ran at the line and delivered a short ball to Sims, who ran over the top of Cronk to score and push his side out to an 18-2 lead.

The Roosters dragged themselves back into it with a try to Mitchell. At 18-8, they looked like there were about to ambush the Dragons like they did last year when halfback Mitchell Pearce kicked a winning field goal in golden point.

But the Roosters never got going again, their attack still a long way off where it should be if they are going to press for the premiership. They have now scored two tries in two matches.