Melbourne’s Josh Addo-Carr may have made headlines for his high-flying acrobatics in recent weeks, but Dragons centre Euan Aitken is confident his team has the defensive structures to shut down the Storm winger.

Flyer: Josh Addo-Carr has put himself in contention for State of Origin.

After battling injuries through the early years of his career, a healthy Aitken has finally put his immense talent on display on a consistent basis throughout the first eight rounds of the NRL season.

The 22-year-old stepped straight past Greg Inglis in the Dragons round five victory over the Rabbitohs and comfortably shut down emerging Roosters centre and Origin contender Latrell Mitchell on Anzac Day. 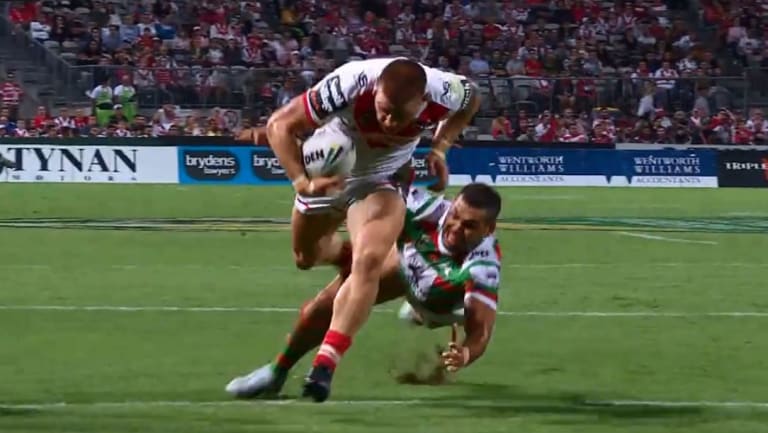 Shown up: Euan Aitken gets one over Greg Inglis.

But this week’s challenge could prove to be Aitken’s toughest yet. The Melbourne Storm left-edge combination of Curtis Scott and Addo-Carr has emerged as one of the most destructive duos in the competition, with Addo-Carr scoring eight tries in just eight games to start the season.

Aitken, however, has heard it all before. He has repeatedly been questioned about his ability to shut down more fancied opponents and he has repeatedly come up trumps. He’s confident this week will be no different.

"Our right edge has been defending really well lately," Aitken said. "We've got a hold right edge, we've got systems there and I think we're going to defend it well. We've just got to keep playing the way we are and I think our best defence will be there on Sunday."

While Addo-Carr and Suliasi Vunivalu are typically on the end of the Storm’s attacking moves, it is Cameron Smith and Cameron Munster in the middle of the field who are orchestrating the attack and Aitken is aware of the threat they pose.

"Smith and Munster are the key men to shut down. They've been playing pretty good football, Cameron Smith obviously leads them around the park, so if we can nullify their attack I reckon we'll go well."

With the Storm boasting a lineup brimming with representative players, including Billy Slater and Will Chambers, the opportunity to impress NSW coach Brad Fittler is not lost on Aitken.

"I love these challenges and coming up against the premiers from last year is a challenge," he said.

"I love going against them and trying to put my best foot forward and coming out on top. I have confidence and back myself and hopefully I’ll do the job.

"I'm just worried about playing some good footy for the Dragons and hopefully that does the talking."