The Drinkwater family have had a pretty successful few weeks.

Last week young half-back Josh Drinkwater led his Catalans side to the Challenge Cup rugby league title in England and on Friday night younger brother Scott starred in his debut for the Melbourne Storm running for 173 metres and a try.

Josh’s proud parents flew to London to watch the final last week before returning on Sunday night to the Central Coast. Then on Friday afternoon Scott called demanding they make the trip to Melbourne. 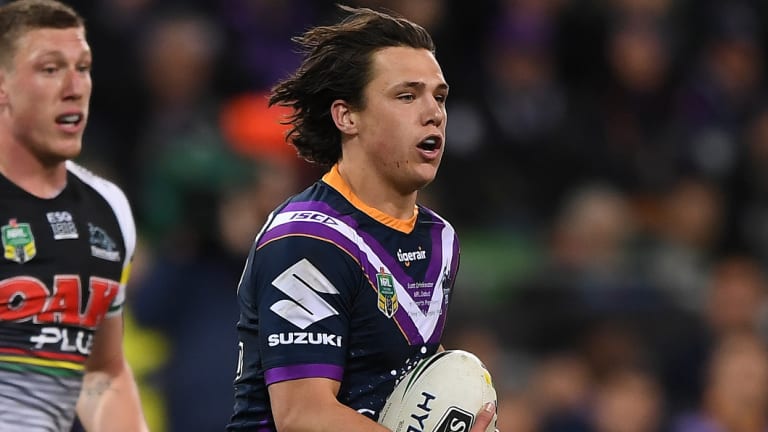 Storming on: Melbourne’s Scott Drinkwater is thirsty for action in the finals.

Drinkwater, 21, was a late call-up for housemate Brodie Croft after Croft hurt his knee and failed a fitness test. His parents arrived at AAMI Park soon after kick-off as the undermanned Storm took on the Penrith Panthers.

“They were over in London watching my brother Josh play in the Challenge Cup final with Catalans and he won that,” Scott said. “They got home last Sunday at 10pm, then I called them at 12.30pm Friday and said ‘I’m in, you better get in the car and drive to the airport’. So it has been a rough trot for them at the moment, they got to see my debut and see their other son win a grand final.”

Drinkwater has been a promising full-back in Melbourne’s feeder system for several years and last week he was crowned full-back of the year in the Queensland Cup after a stellar season with Easts Tigers.

He thought he would be playing for the Tigers in their elimination final on Saturday; instead he was held in Melbourne on standby.

Croft is a specialist half-back and Drinkwater a full-back but the Storm moved Jahrome Hughes from full-back to half allowing Drinkwater to take the role.

“I was a bit on edge, I was keen to play but Brodie is my roommate too so at the same time I felt for him and wanted him out there as well,” Drinkwater said.

Much like Billy Slater in his early years, Drinkwater is a slightly built but nifty ball-runner and he took his time to adjust to the pace and physicality of first-grade play. “It’s a lot faster, especially that second half, it was just end-to-end footy so I was a bit tired at the end of the game. But I’ll get some more match fitness as I play more games,” he said.

Drinkwater’s confidence grew across the game and in the second half he looked to have scored a try after sprinting over from 10 metres out but it was ruled out for obstruction. However he again found the line with just four minutes to play, scoring his first NRL try.

■ Cronulla’s Valentine Holmes enters the finals as arguably the hottest player in the NRL after leading the Sharks to a 30-18 win over Canterbury. Holmes scored a try and set up three others yesterday to continue a strong run of form that has coincided with the Sharks ending the regular season with a four-game winning streak. And in the final match of the regular season, a record-equalling four tries from winger Corey Oates helped Brisbane grab sixth spot and a home final with a 48-16 win over Manly.