A fog descended upon the grand, old colosseum on Saturday as a prelude to winter, and Carlton still could not find a way out of it, either figuratively or literally.

The downtrodden Blues are 0-5 to start the season after West Coast shook them off at the MCG, kicking away after half-time after Carlton had conjured a surprisingly competitive performance with almost half their best team missing through injury. 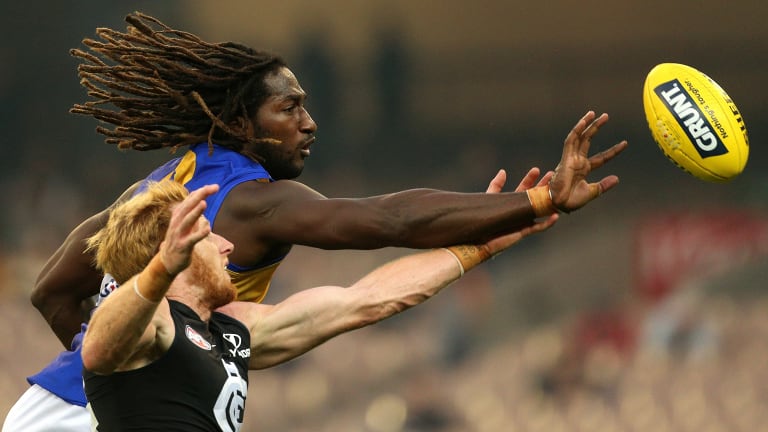 Nic Naitanui soars over the top.

West Coast are 4-1 and on top of the ladder, having drawn little support from the game’s top analysts in the pre-season. They can now take stock of the fact that they are officially the season’s early surprise packet, with four consecutive wins rounded out by a 10-point victory on Saturday, and a highly-winnable home game against Fremantle next weekend.

Just as much to the point, the Eagles came to the MCG and won at what will be one of just two regular-season appearances at the home of the grand final. For Carlton, the reality is that a two-goal defeat by one of the better teams in the competition reaches the pass mark, especially with skipper Marc Murphy, Matthew Kreuzer and a bunch of others out of the team through injury.

The Eagles won it with one spectacular burst in the last 10 minutes of the third quarter.

To that point of the game, West Coast’s poor conversion (5.11 to half-time) had kept the contest interesting. But in that 10 minutes the Eagles banged on four consecutive goals to take the margin out from three points to 28 points at three-quarter time.

Carlton’s woes in that decisive period were summed up by 100th-gamer Liam Jones, who was having a decent night in his milestone game, but whose overly speculative kick across defensive goal at the 31-minute mark of the quarter spilled from Lachie Plowman’s hands, was trapped by West Coast’s Andrew Gaff and resulted in a gifted goal. 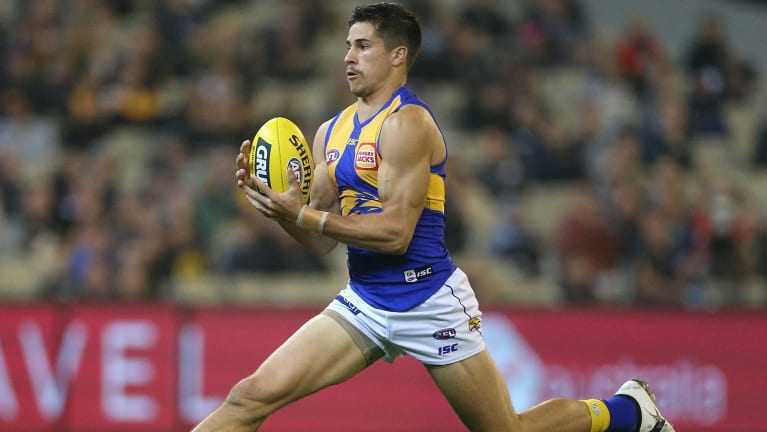 Liam Duggan takes a chest mark in his stride.

The Blues were admirable, kicking four goals to one in the final quarter to control the damage. But in truth, West Coast were on top in general play for most of the game, only frailty in front of goal costing them a big win. The Eagles had no particularly bad offenders; the disease infected them all. They won the inside-50 count, and had 10 more scoring shots.

The significant influencers for West Coast were on-ballers, for their main forwards in Josh Kennedy and Jack Darling were subdued on the night. Elliott Yeo (26 disposals, 11 tackles) made his name as a tall defender but is now outstanding as an in-and-under midfielder, and he was dynamic along with Andrew Gaff, the hard-running left-footer who continually hurt Carlton with his 31 disposals.

West Coast’s superstar full-forward Kennedy equalled Peter Sumich’s club record 514 career goals but could not manage more than that one goal in the second quarter to break it.

Kennedy thought he had broken the record when he snapped a goal in the third quarter, celebrating with a fist pump, but anti-climactically, a score review had it overruled, determining that the kick had been touched off the boot.

The lights in the darkness for Carlton include Patrick Cripps, continuing to show up as a beast of a midfielder with 34 disposals and 11 tackles on the night. "He's a warrior; he's a soldier,'' said coach Brendon Bolton later. "We love him.''

They have the eternally honest Kade Simpson, who played as a spare across half-back and kept mopping up, cajoling his teammates. And the Blues have excellent youth in Charlie Curnow and the likes of Zac Fisher, a miniature on-baller from Perth who never stops burying his head into contests. Harry McKay came back into the team and kicked four goals, including one with a banana kick from the forward pocket in the final quarter.

McKay, in just his third senior game, had an excellent night after a sloppy start. Twice early he cost Carlton – once with a free-kick off the ball when the Blues were going forward, and once when he kicked out on the full with his left foot as he tried to get the football to a wide open Levi Casboult ahead of the ball. But when the opportunities came, he seized them.

Another to show up was ruckman Andrew Phillips, who had the big task of countering Nic Naitanui at centre bounces. But Phillips was up to the task, at least nullifying Naitanui.

The Blues just have too many players to cover. They had Murphy, Kreuzer, Caleb Marchbank, Matthew Kennedy, Jacob Weitering absent in addition to Sam Docherty, who has a season-ending knee injury.