Of all the underdogs gunning for upsets in the John I Dent Cup, it was the Gungahlin Eagles with the most to play for.

As the club's old boys lined the sidelines, the Eagles pulled off a stirring 20-12 win over Royals to cap off heritage round in superb fashion at Nicholls Enclosed Oval on Saturday.

Eagles coach Dan Atkins said the old boys provided the confidence his men needed to pull off their biggest win of of the season. 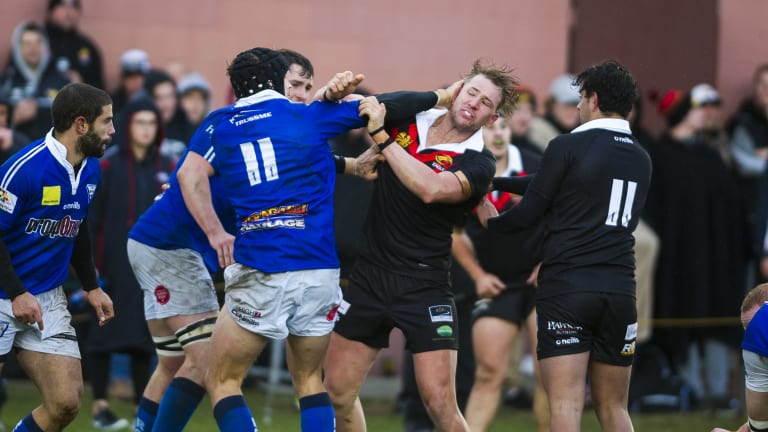 A fight breaks out in Gungahlin’s upset of Royals.

"That gave us a lot of confidence that win and it definitely helped that we had a lot of old boys here barrack us on," Atkins said.

"Our defence really held up against Royals and it is nice to see that both teams out there had a bit of an even playing field."

Atkins said the Royals are still a dangerous side and backed them to return "better than ever."

Royals had dropped just two games this season before they were stunned by Gungahlin and coach Wayne Southwell put the loss down to poor decision making.

"Look, we had enough field position to win that today just some pretty poor decision making and just not maintaining possession when we need to," Southwell said.

Gungahlin kept the reigning champions try-less as their defence took to control of contest, before they crossed for three tries of their own. 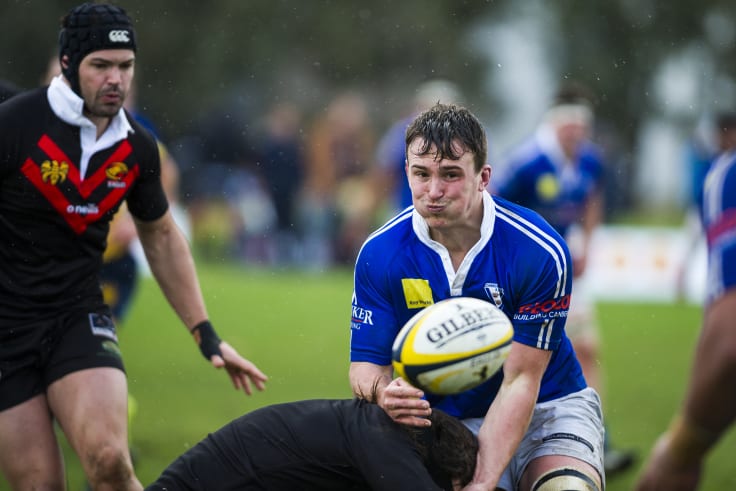 Royals lock Will Morrison gets tackled.

Gungahlin playmaker Josh Gillard copped his second yellow card in three weeks when repeat infringements at the ruck with two minutes left in the game.

“That was a yellow card probably just from guys being over committed and very passionate towards the end there wanting to get that win, the right call was made,” Atkins said.

Upsets were the order of the day as bottom-placed Wests proved too strong for premiership contenders Queanbeyan in a 30-10 victory across the border at Campese Oval.

Competition frontrunners Tuggeranong slumped to a shock defeat of their own when Uni-Norths mounted a spirited defensive effort to hold on for a 31-28 win at Viking Park.

Gungahlin's triumphs kept coming as they celebrated Leigh Hancock's 400th game with a 49-17 win over Wests in third-grade in a fitting tribute to the club's most-capped player.