Elvis Kamsoba has a story to match the name. The Avondale FC livewire was crowned on Tuesday night as the inaugural winner of the Michael Cockerill Medal for the best player from an NPL team in this year's FFA Cup. The honour caps off a remarkable journey, but there could be much more yet to come.

Born in war-torn Burundi, Kamsoba's family fled to Tanzania when he was just four months old. He spent the next 11 years of his life in a refugee camp. It was there he fell in love with football, although he and his mates had to kick around condoms filled with clothes in lieu of an actual ball. 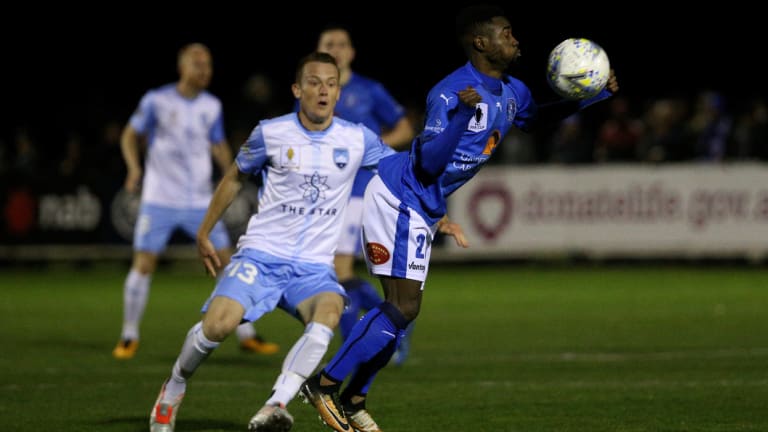 Elvis Kamsoba of Avondale FC right was awarded the Cockerill Medal for the best NPL player in the FFA Cup on Tuesday.Credit:AAP

"We couldn't afford a ball," Kamsoba told Fairfax Media. "Life was very hard. There wasn't much else to do – go to school, come back home and kick about with your friends."

Kamsoba's ticket to freedom eventually came in 2008, when his family moved in Australia and settled in Adelaide. He immediately registered with a club and quickly rose through the ranks in Adelaide. A move to Melbourne soon followed. Kamsoba signed for Avondale this season and was one of their most dynamic attacking weapons as they reached the FFA Cup quarter-finals and the NPL Victoria grand final.

Kamsoba, now 22, is part of a generation of African-born players who are transforming the face of Australian football. He used to play in African tournaments in Adelaide against newly-minted Socceroos Awer Mabil and Thomas Deng.

"I know a lot of guys who have what it takes, they just need a chance at the next level," Kamsoba said. "If they train every day in a full-time environment, they can become very dangerous weapons for Australia in the future."

Kamsoba himself might get a crack at A-League level soon enough. After the NPL season he trained briefly with Melbourne Victory, who are still keeping tabs on him. "Everything's in God's hands. I feel like I'm ready for the next step," he said.

He is a fitting winner of the Cockerill Medal, created by Fox Sports this year in recognition of the late commentator and Fairfax Media football doyen. Cockerill was a huge advocate for NPL football and for the integration of newly-arrived migrant groups into the sport. "When I was told, I was like, 'So I'm the first guy to win the medal with this name?' I was very happy," Kamsoba said.

As for the name, Kamsoba hasn't heard much of Elvis Presley's music. "When mum was pregnant, she heard the name Elvis – I think she was at a shop or whatever," he said. "She thought it was a unique sort of name, not many people were called Elvis in Africa. I've seen his pictures. He's a good looking guy. I'm not bad either."