Australian point guard Simmons had 14 points, eight rebounds and seven assists and the sharp-shooting Redick poured in 24 points as the Sixers improved their imposing home record to 11-1. 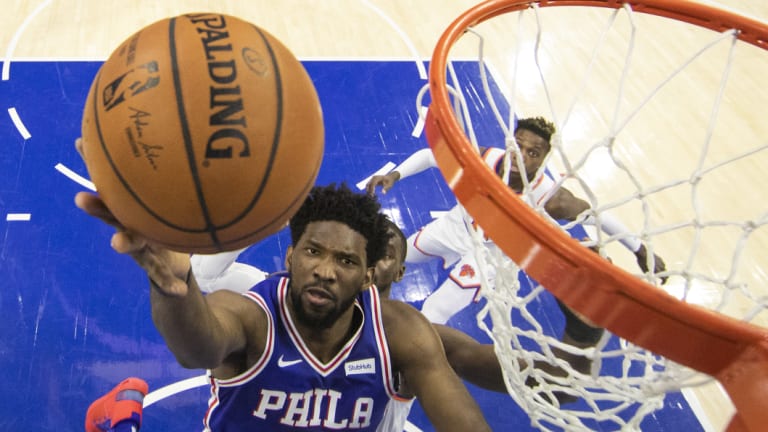 Joel Embiid starred for the Sixers in their thumping win over the Knicks.Credit:AP

But it was Embiid who was again the star turn, finishing with 26 points, 14 rebounds and seven assists for a league-best 21st double-double of the season.

Enes Kanter and Mario Hezonja had 17 points apiece for the Knicks.

Donovan Mitchell returned from a two-game absence with bruised ribs, scoring 29 points to lead the Utah Jazz to a 101-91 victory over the Brooklyn Nets.

Rudy Gobert had 23 points and 16 rebounds for the Jazz, while Australian swingman Joe Ingles chimed in with seven points, seven rebounds and five assists.

Earlier in the day, the Jazz agreed to acquire veteran shooting guard Kyle Korver from the Cleveland Cavaliers.

The Jazz have struggled from beyond the three-point arc this season and Korver should certainly improve them in that area.

Jeremy Lamb scored 23 points and Cody Zeller had a season-high 19 as the Charlotte Hornets avenged a recent loss to Atlanta with a 108-94 victory.

The Hawks had topped the Hornets 124-123 on Sunday night at home when John Collins blocked Kemba Walker's shot at the buzzer. But this one wasn't close.

Walker, who came into Wednesday's game averaging 27.9 points, finished with 19 points while battling through an off shooting night.