EMILIANO MARTINEZ snapped back at his old Arsenal team-mate Alexandre Lacazette on Twitter after the Gunners striker suggested he fouled him in the box.

The Aston Villa shot-stopper kept his 11th clean sheet of the season in the 1-0 win over his old side at Villa Park on Saturday. 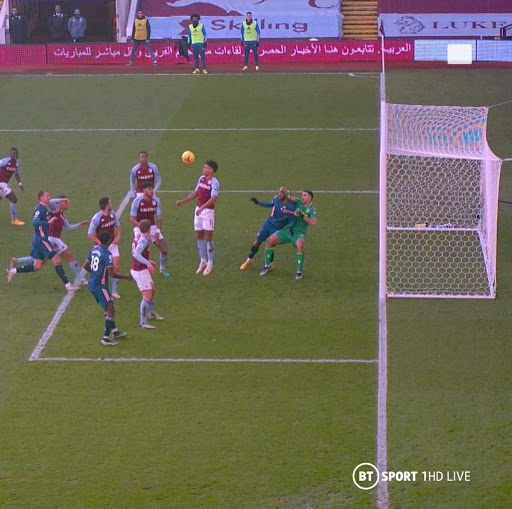 But Lacazette and Martinez clashed in the 57th minute from a corner with the Argentine keeper appearing to pull down his old pal.

However, referee Chris Kavanagh saw it differently with Lacazette penalised for fouling Martinez – who left North London for Dean Smith's side in a £20million deal ahead of this season.

Lacazette clearly didn't agree with the call and vented his frustration online after the game.

In response to a tweet with a clip of the coming together, he replied: "Another one."

Martinez was keen to have the last word and hit back with: "You were pushing me first bro."

Former top ref Peter Walton said VAR was right not to overturn the decision and hand Arsenal a penalty.

"The point is VAR is not there to get the correct decision, it is there to identify clear and obvious errors from the referee or if the referee has missed something.

"What I would say is from a subjective point of view, has Lacazette used that opportunity to then lean on the goalkeeper? We all agree that within football there is a certain amount of physical contact allowed.

"We get that and we don't want VAR looking at items of that nature where it's such a subjective viewpoint."

Ollie Watkins scored after two minutes to condemn Arsenal to their second defeat in a row and leave Mikel Arteta's men without a win in three games.

Cedric Soares' woefully under-hit pass had allowed Bertrand Traore to nip in ahead of Gabriel and slide the ball across the box.