The theory doing the rounds in rugby league circles at the moment is that Melbourne and the Roosters can directly thank the backlash to the early-season rules crackdown for their run of success.

It's all over social media and its proponents are garnering a great many retweets, therefore it must hold some water. Right? Right. 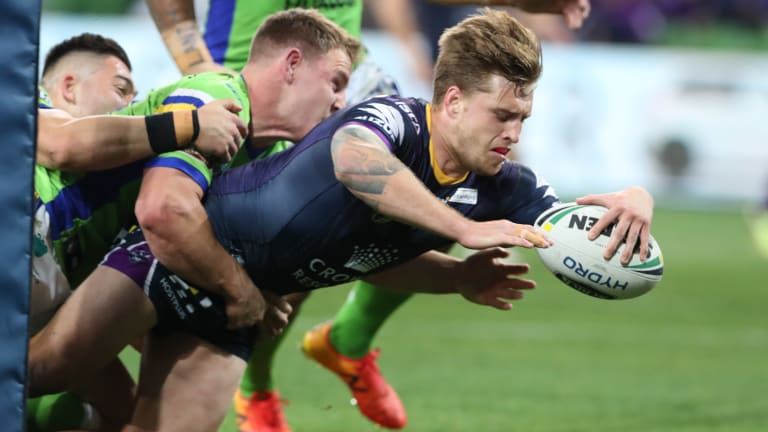 Line honours: Cameron Munster scores for Storm during their round 20 win over

This NRL season has been split into two defined eras. To critics, it was like the Ice Age and the great thaw that came afterwards. A flood of penalties cracking down on the game's basics was met with derision from a rowdy bunch of players, coaches, fans and pundits, who feared for the spectacle of it all.

As a result, ahead of round 15, Todd Greenberg issued a wind-back or sorts, urging referees to continue to police the key areas but not go out of their way to look for penalties. The sin-bin was also back on the table for foul play.

It means referees have been getting the message, although for some teams the change has been more beneficial than others. Melbourne, as per the suggestion that the relaxed interpretations have helped their cause, are a good example.

That all sits nicely with an eight-game winning streak that has them on top of the NRL ladder and looking every bit the premiership hope. But that is only part of the story for Melbourne, whose fortunes in another key penalty stat didn't change much at all.

For all their skill at helping to control the speed of the other team's ruck, the Storm are masters of their own destiny with the ball in hand. They know how to contain the pace of rivals but also know how to combat those very same tactics when they are moving up the field.

The Roosters have been another team suggested to have been given a boost by the change in tack from referees, although the numbers are hardly compelling. The difference between penalties conceded pre and post round 14 was just 1 (8.6 to 7.6) and for penalties awarded, only 0.3 (8.1 to 7.8).

For others, the figures don't explain any seismic shift in performance. Over the opening 14 rounds, the impressive Dragons were the least-penalised team in the NRL, giving away just 7.6 in the midst of the crackdown.

Afterwards? They were still the best, now giving away just 5.5 per game over the past six rounds. For them, even better discipline hasn't resulted in even better form as top-eight rivals gather substantial amounts of steam.

For some teams in the top eight, the difference in refereeing has had no statistical impact whatsoever. For both Brisbane (8.0) and the Warriors (8.8), there wasn't any difference in the average amount of penalties they conceded when the first 14 rounds were compared to the past six.

The team to benefit most out of the end of the penalty blitz? That would be the Gold Coast Titans, who have dropped three penalties per game from the stat sheet when the two parts of the season are compared.

In terms of teams earning penalties, the Raiders have suffered greatly, which would probably just add some fuel to Ricky Stuart's fire. His team was given 3.6 fewer penalties per game over the past six rounds when compared to their round 1-14 average of 9.6, which was the most in the game.

Like most things in rugby league, the perceptions only loosely match up to the reality. Yes, Melbourne have been helped by the officiating shake-up but it's their ability to take an iron-grip on the tempo of a contest that has been their biggest asset.