England fans are dreaming of World Cup glory after their team banished a decades-long curse of flunking penalty shootouts thanks to a nail-biting win over Colombia.

Roaring middle-aged men ripped off their shirts and women danced at the Flat Iron Square bar in central London as England beat the Colombians 4-3 on penalties in Moscow on Tuesday. 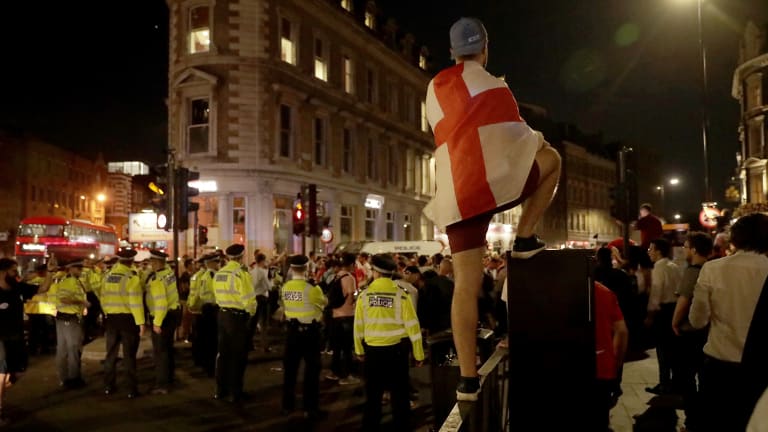 "England are going to win the World Cup."

Only half an hour earlier, the mood was desolate after Colombia equalised in the dying seconds of a match that England were on course to win 1-0 thanks to Harry Kane's penalty.

As extra time progressed with no more goals, the punters began to talk despairingly of more shootout pain for England, who last won a match on penalties at the 1996 European Championship, and had never done so in a World Cup before.

This time, it was different.

Eric Dier's cool sidefoot past Colombia keeper David Ospina — the 10th kick of the shootout — set up a quarter-final on Saturday against Sweden, who are ranked 12 places below England.

Riot police were called out in some parts of the country to ensure the celebrations did not escalate too far as supporters spilled onto the streets following the drought-breaking penalty shootout.

England coach Gareth Southgate, whose own shootout miss in the Euro '96 semi-finals sent England crashing out of that tournament, said the win was "fantastic", adding: "I think we deserved it as well."

Britain's Prince William said: "I couldn't be prouder of @england – a victory in a penalty shootout!"

"You have well and truly earned your place in the final eight of the #worldcup and you should know the whole country is right behind you for Saturday! Come on England!"

Fans leaving the Flat Iron Square bar chanted, "football's coming home," a 1996 song by pop band the Lightning Seeds adopted by supporters as the anthem of the England soccer team.

England won the World Cup in 1966 on home turf and, aside from reaching the semi-finals 28 years ago, they have never come close to winning the trophy again — even with a "golden generation" of players in the 2000s captained by David Beckham.

Now bookmakers say England, unfancied at the start of the tournament in Russia, are second favourites to win the 2018 World Cup, behind five-times winners Brazil.