You could not write a script like this. No-one would possibly believe it.

First there was a very real chance of India pulling off the victory on the last day of the final Test to end all Test victories. Then Adil Rashid made a crucial intervention with one of the best deliveries you will ever see bowled.

And then Jimmy Anderson made Test history when he had the final word of a truly tumultuous series to earn a dramatic win for England before leaving the Oval hugging his great friend Alastair Cook and being moved to tears. Phew. 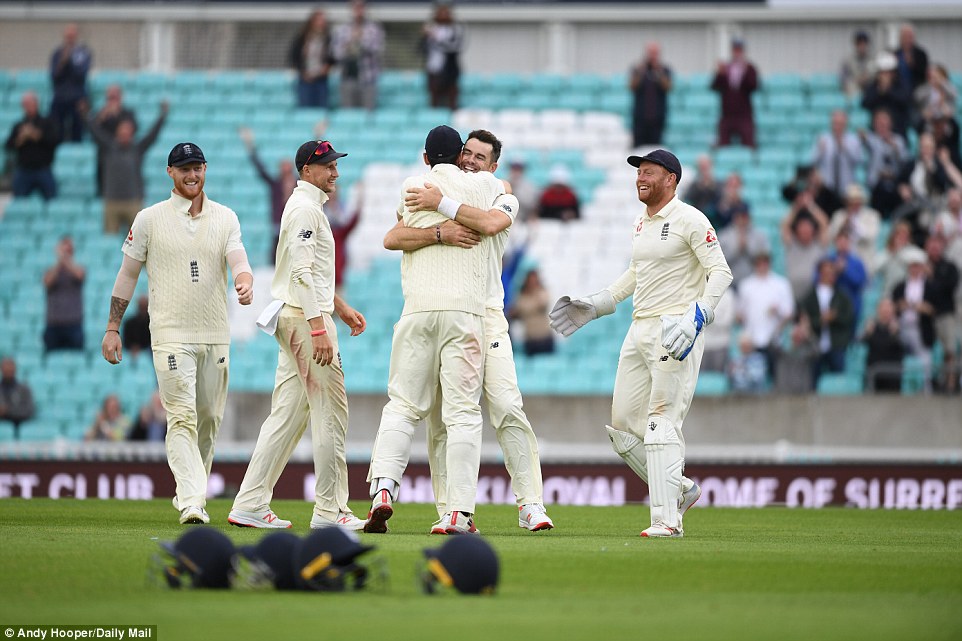 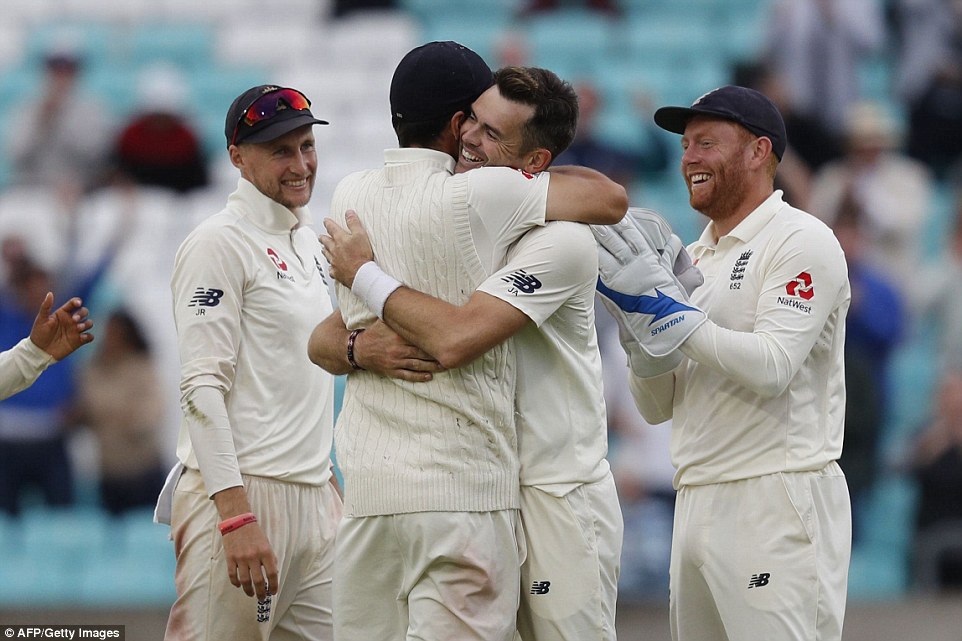 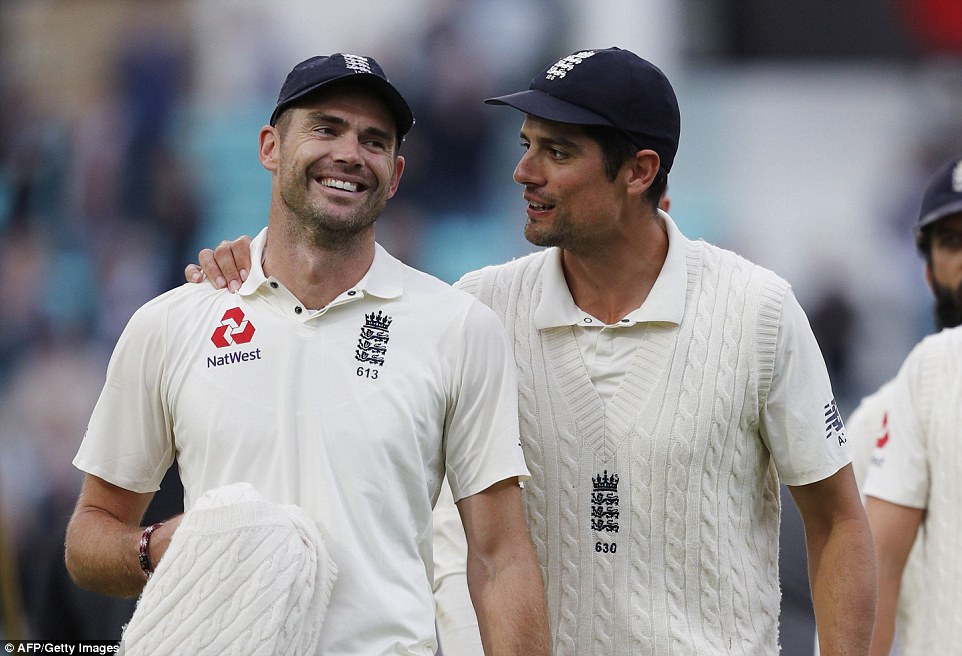 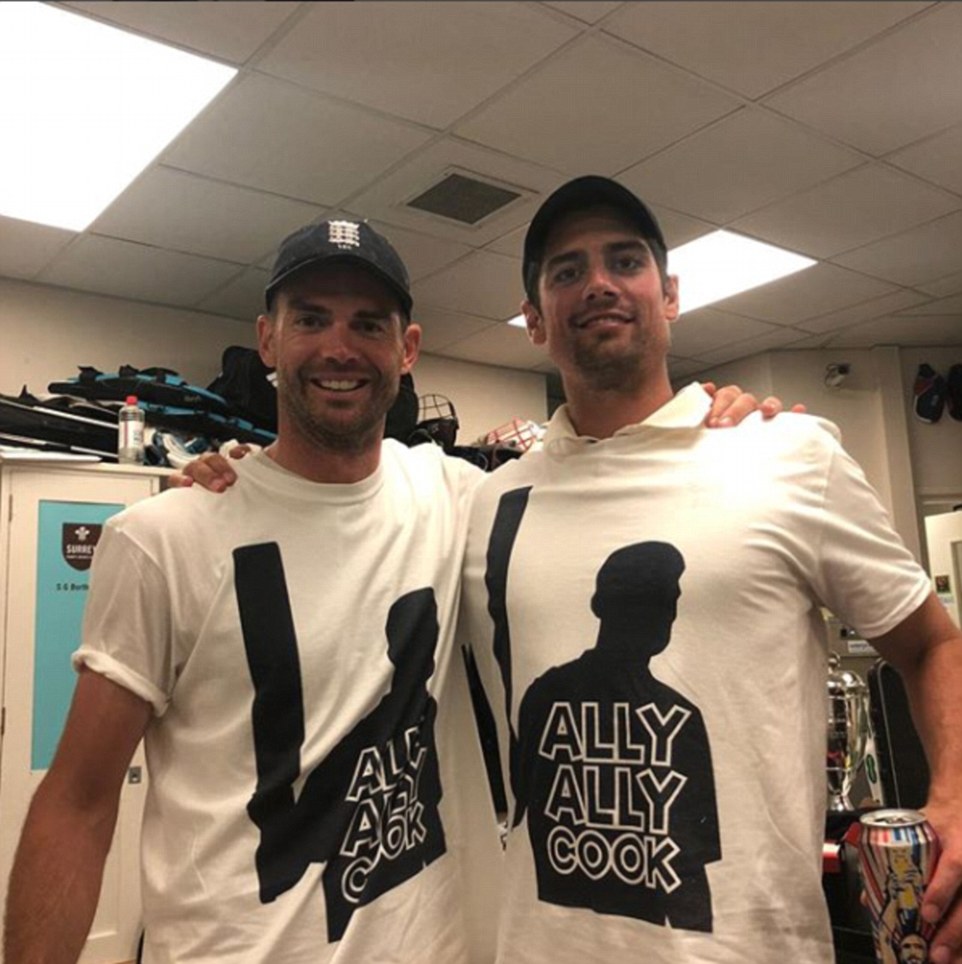 Anderson and Cook both wearing their ‘Ally, Ally Cook’ t-shirts celebrate England’s success on the final day of the fifth Test

Where to start? Surely it has to be with Anderson finally going past Glenn McGrath and becoming the most prolific fast bowler in Test cricket when he bowled Mohammed Shami to earn England a thrilling 118-run win.

The big moment, which finally came at 5.30pm, had looked inevitable when Anderson took two wickets in four balls on the fourth evening to draw level with the legendary Australian on 563 and behind only three great spinners.

But how India made him wait for the 564th. How they made England sweat over a victory that had looked inevitable at the start of a last day of a series that has been full of the twists and turns and unrivalled drama that makes Test cricket still the greatest form of the game.

Take a bow KL Rahul and the 20-year-old sensation in Rishabh Pant who put on 204 for India’s sixth wicket and left everyone present at the Oval mumbling quietly to themselves at tea ‘they can’t win this, can they?’ 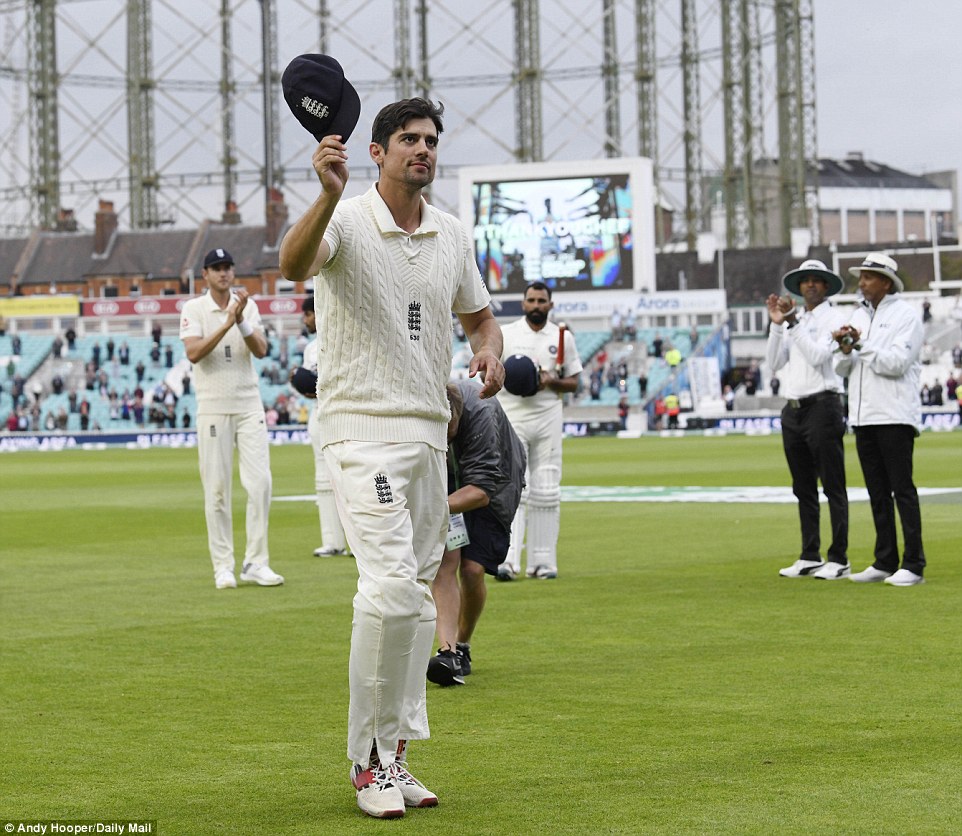 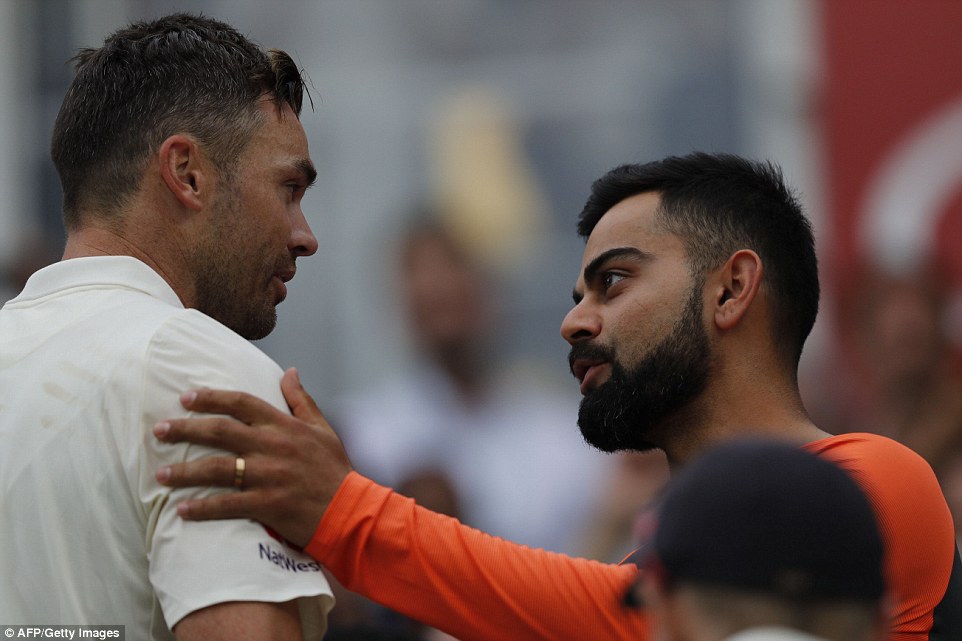 Take a bow Rashid, who ripped a leg-spinner that pitched outside leg-stump, turned 10 degrees out of the rough and took the off bail to end Rahul’s quite brilliant 149 and turn this final Test decisively back in England’s favour.

And take a bow Anderson who, at 36, looks as good as ever and can now target 600 wickets and reach heights that no fast bowler will ever match in these days of white-ball sadly overshadowing days, Tests and classic series like this.

It took quite something to upstage Cook’s century in his final Test innings but somehow the sight of Anderson claiming the final wicket and then insisting his great friend walk off ahead of him into retirement before breaking down when talking about him to Ian Ward on Sky somehow managed it.

Those emotional scenes had been set up by the boldest of the many adventurous picks that have typified Ed Smith’s first season as national selector and eventually led to such a notable victory over the best team in the world. 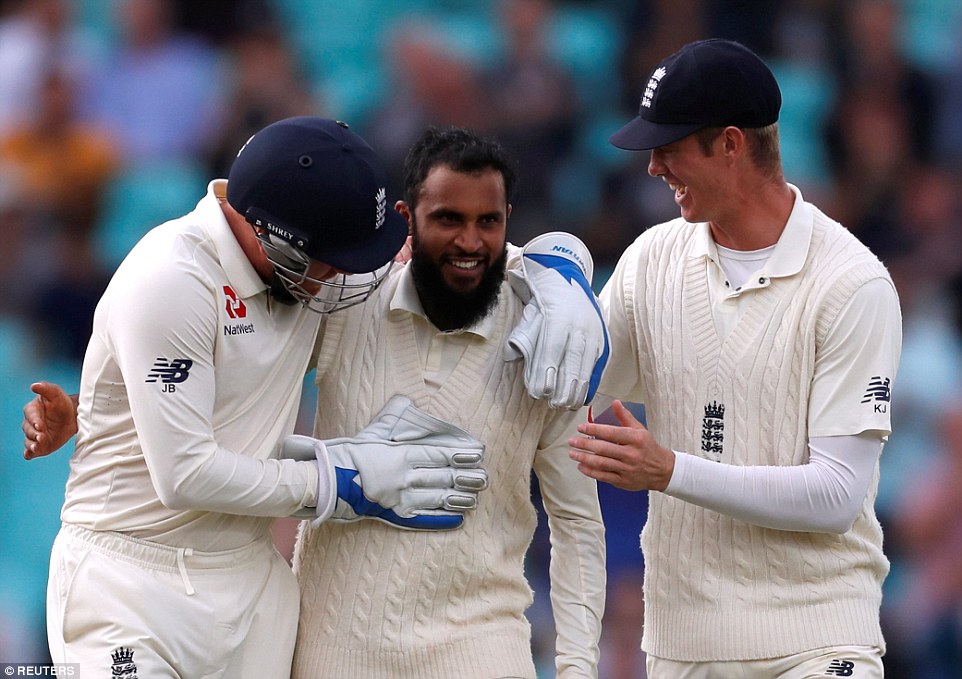 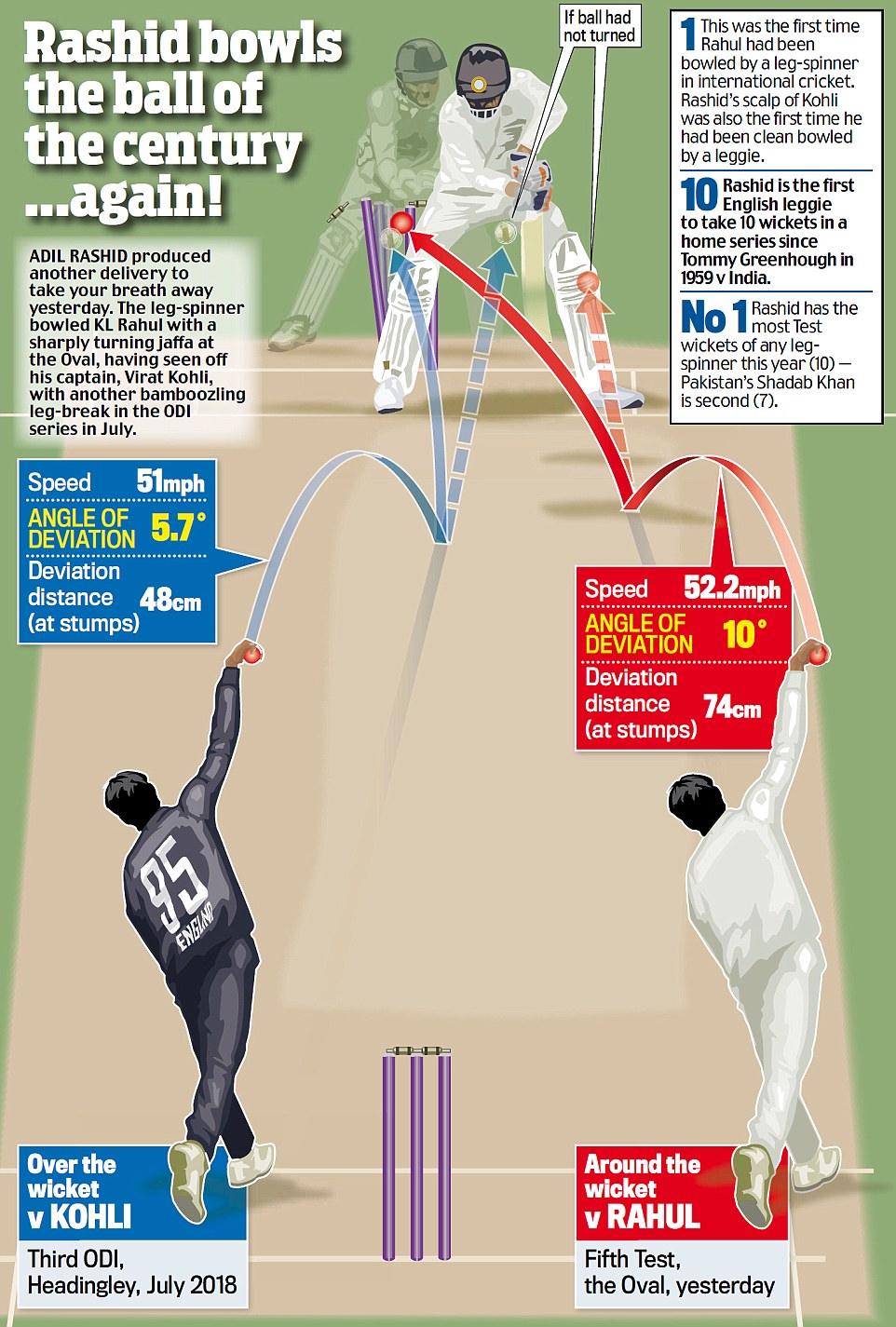 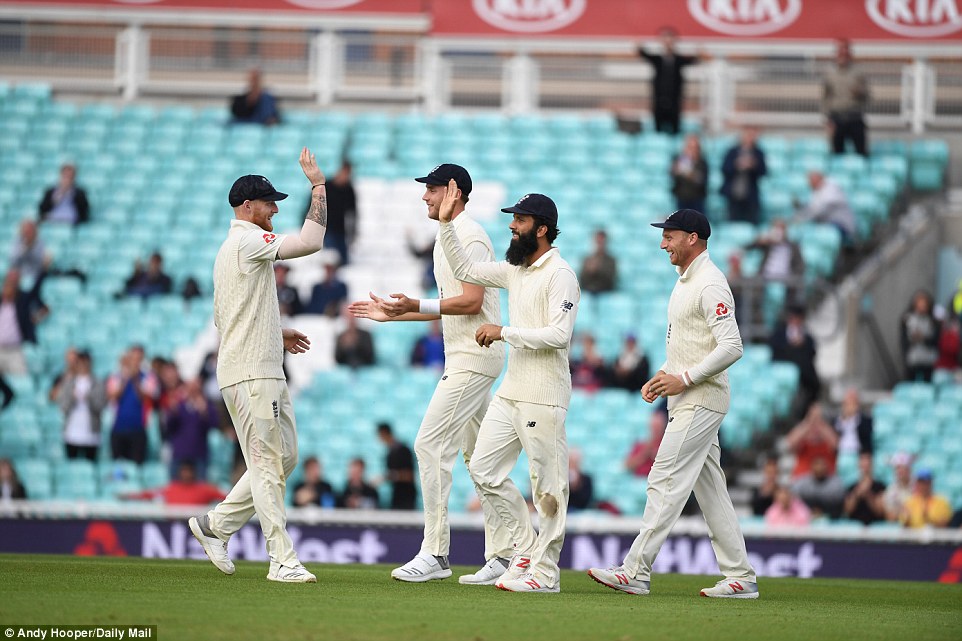 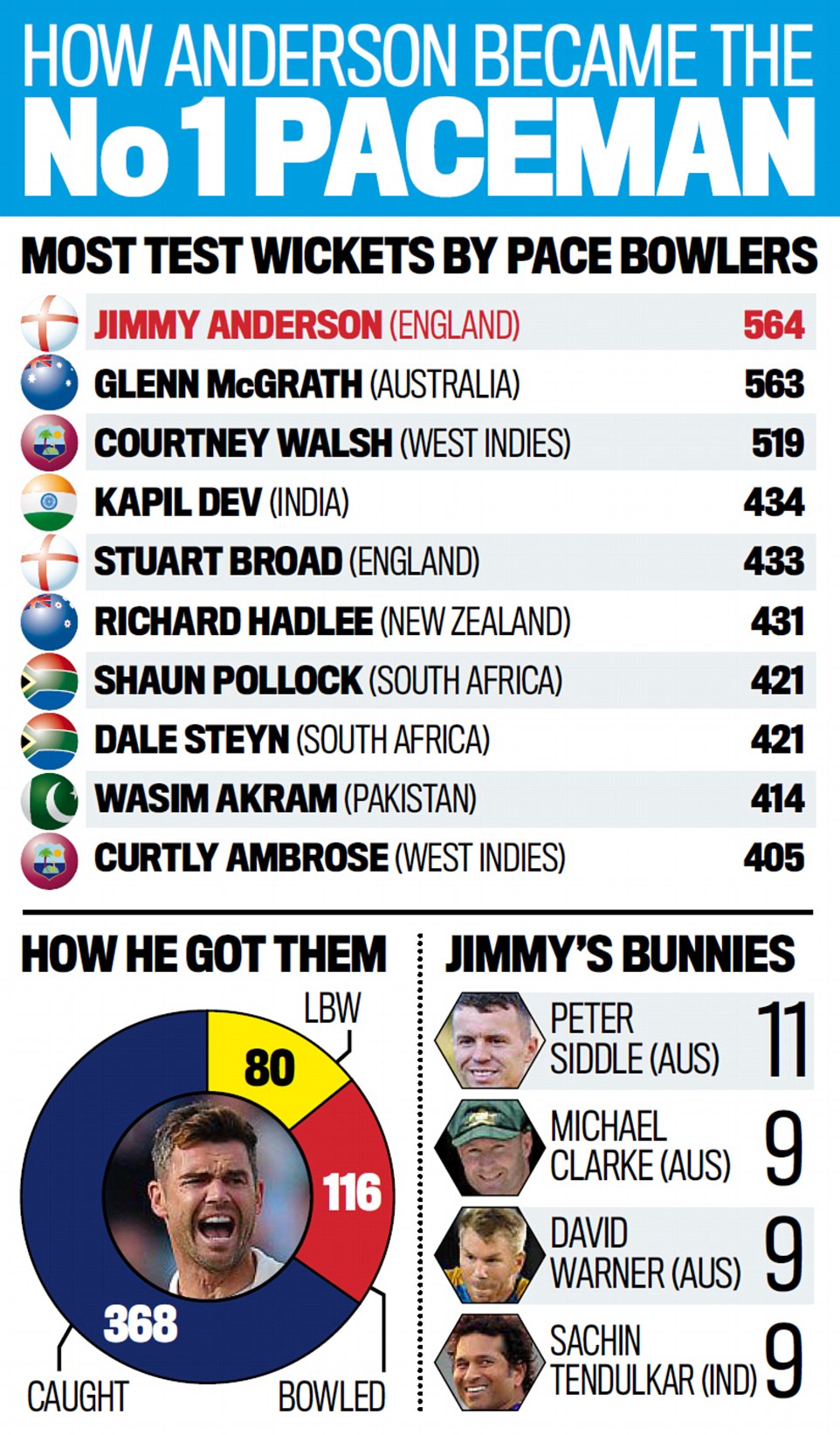 It has taken the best part of five Tests but Rashid finally justified his controversial return to red-ball cricket by denying India what could have been the most extraordinary victory in the history of the great old game.

The final day of what has become one of the greatest Test series since the fabled 2005 Ashes began at the Oval with what appeared a routine England push for the victory that would give them a 4-1 series triumph.

Yet just after tea India dared to dream of putting even Cook’s perfect farewell in the shade by somehow chasing 464, 46 more than any side has ever managed to win a Test, to give this series a final, barely believable, twist.

That was when Joe Root, who had allowed England to drift in the inevitable hangover that followed Cook’s fairy-tale century on Monday, made what was arguably his most decisive move so far as Test captain.

Rashid has been a largely peripheral figure since Smith bucked convention by insisting the leg-spinner was the best slow bowler for this series even though he had turned his back on all red-ball cricket with Yorkshire.

It is not as if Rashid has done much wrong in a series dominated by swing and seam but he has not had many opportunities to do much right, being overshadowed by Moeen Ali and not even bowling or batting at Lord’s. 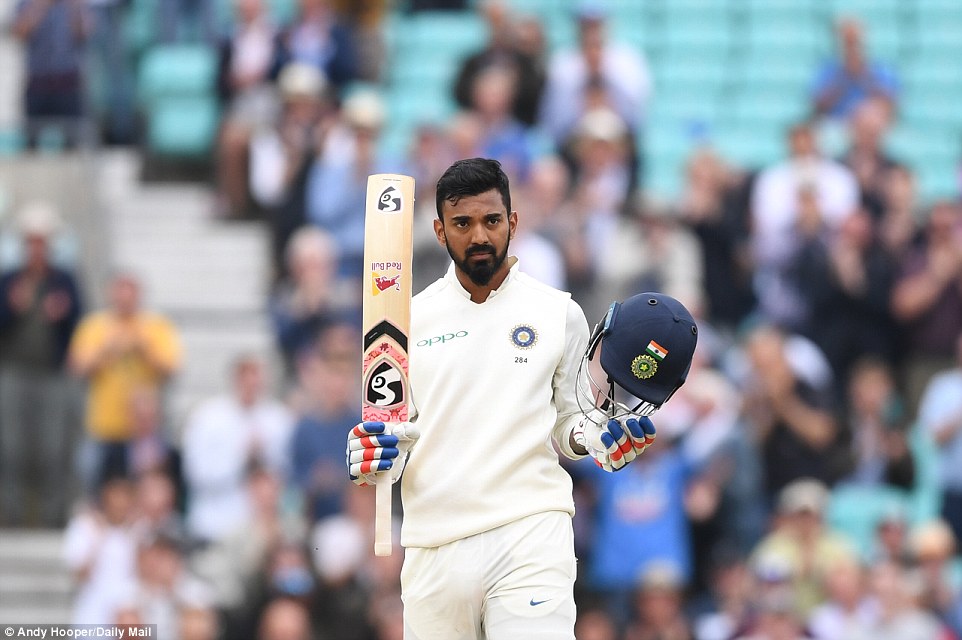 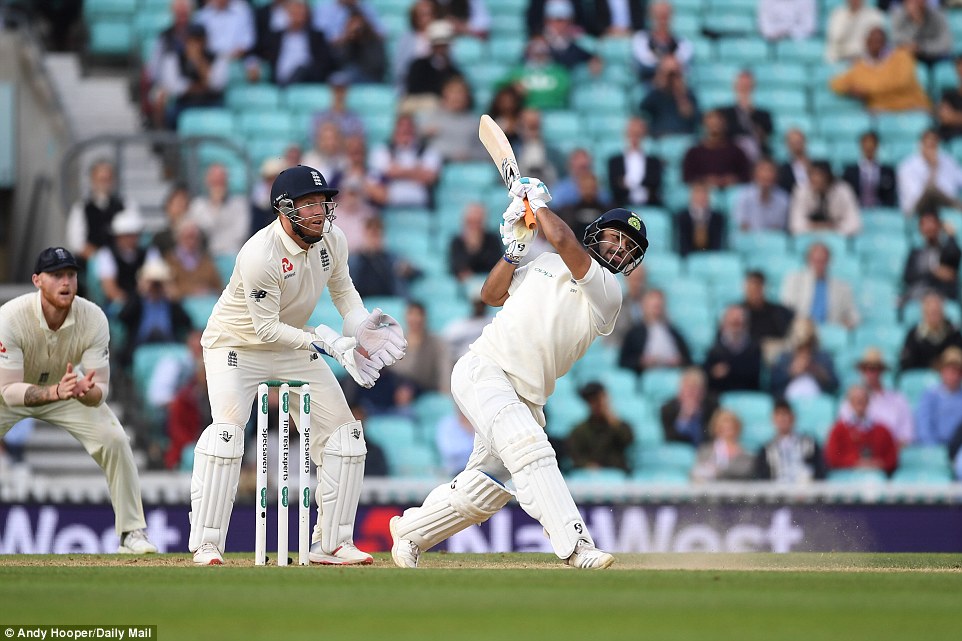 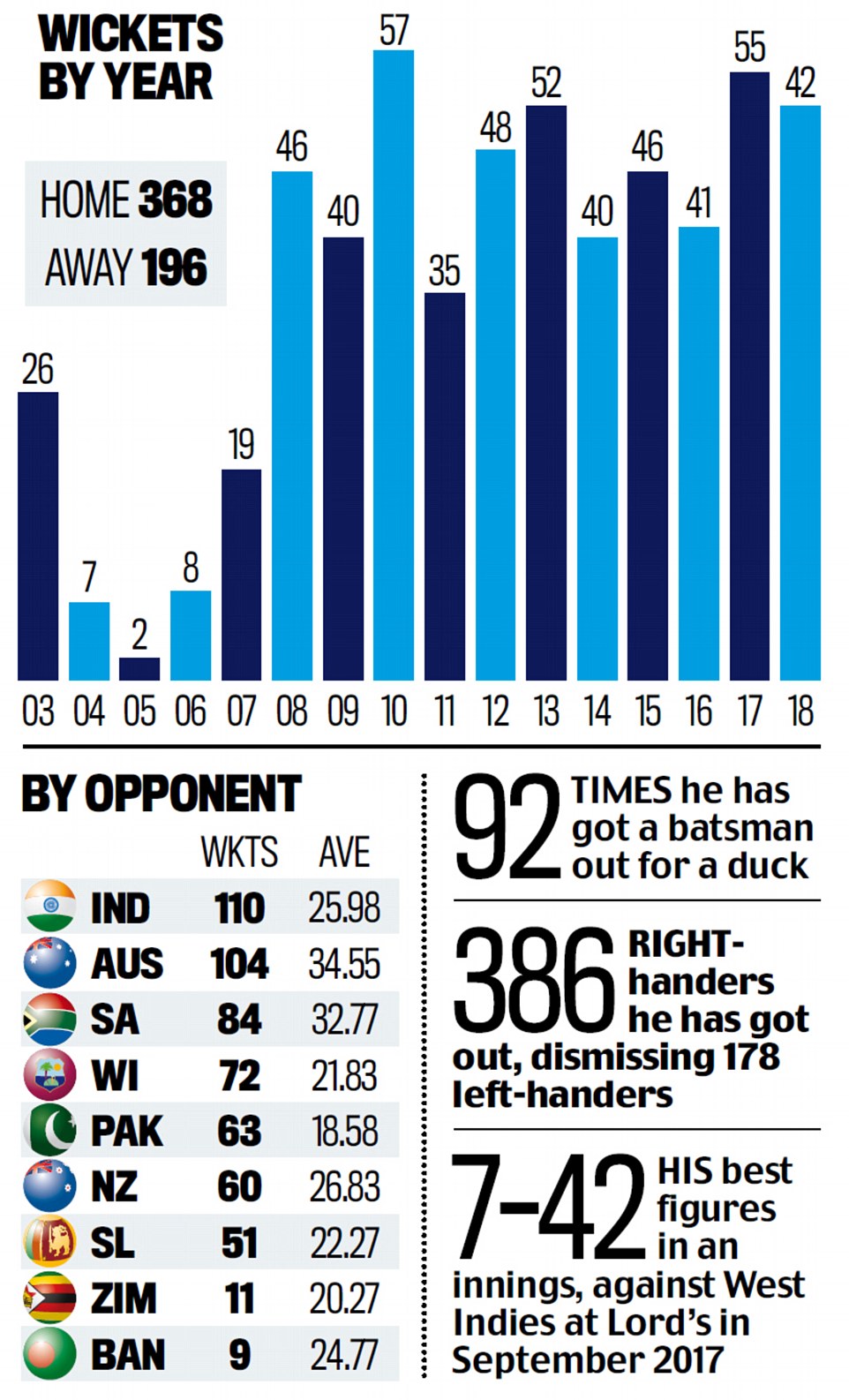 And, after going for 56 in his first seven overs on Tuesday, it looked as if Rashid would again fail to play his part on a last-day pitch and leave questions unanswered ahead of the imminent visit to the turning surfaces of Sri Lanka.

All that changed in the 79th over of India’s innings during a skilful counter-attack by Rahul and Pant that had threatened to turn this final Test on its head.

It was then Rashid started to trouble Pant with prodigious turn, prompting Root to delay the second new ball even though all cricketing logic screamed out for another burst from Anderson and Stuart Broad. So Rashid stayed on and that was to prove the pivotal moment of the match.

From the depths of two for three on the fourth evening and a last morning start on 58 for three India had stabilised while losing two wickets before two of their most swashbuckling players repelled all England could throw at them.

Rahul, who had started this tour with a Twenty20 century, ended it with the classiest of Test hundreds while Pant put a challenging start to his Test career as a keeper behind him to display his full strokemaking repertoire and go to the first Test century by an Indian gloveman in England with a six off Rashid. 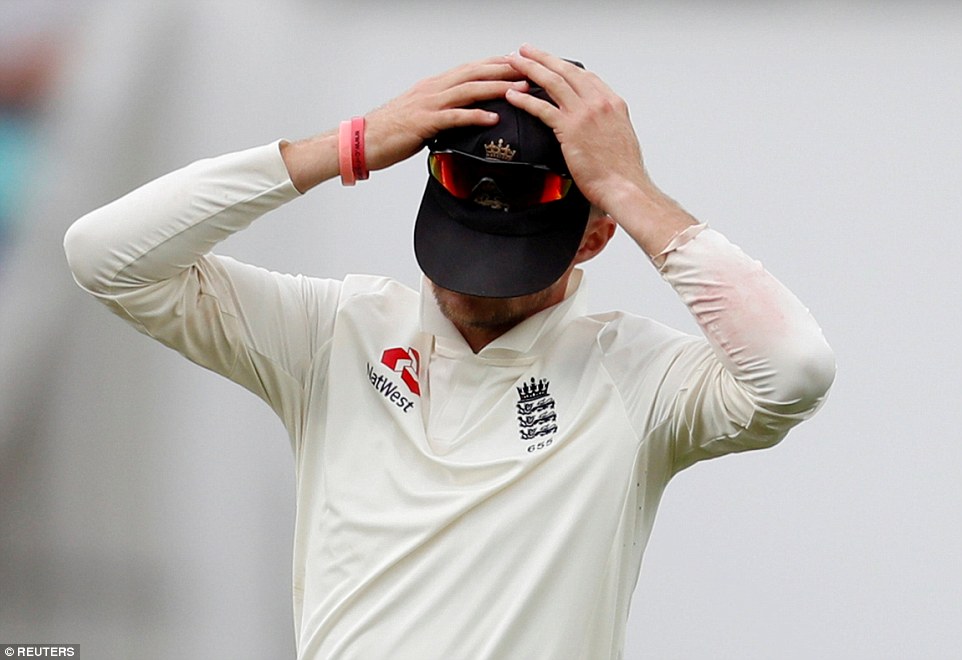 No-one had ever come close to reaching 464 to win a Test before but so much of modern cricket makes history look bunk. Cricketing sense told you India could not possibly do it but the nagging suspicion remained, with 166 needed in 33 overs after tea and five wickets in hand, that they just might,

Rashid changed all that with a ball that was better even than the snorter to bowl Kohli in a one-day game at Headingley earlier this summer that did so much to earn his Test recall in the first place and followed it in his next over by tempting Pant to smash him high to his great friend Moeen at long-off.

The door was open, man of the series Sam Curran burst through with two wickets when the new ball was eventually taken and then Anderson, who had seen Jonny Bairstow drop Ravindra Jadeja on three, made history.

Now Cook will depart in the best possible way to await the birth of his third child and a new life away from international cricket while Anderson will carry on towards one last tilt at the Ashes next year. The batting king is dead, long live the bowling king.