Captain Jason Holder was again in inspirational form as his career-best 6-42 earned West Indies control of the first #raisethebat Test on day two, at the Ageas Bowl.

Holder bowled with expert control to extend a remarkable run which has seen him take 59 wickets at 13.49 apiece in 12 Tests since January 2018, as England folded to 204 all out.

West Indies reached 57-1 in reply, losing John Campbell lbw to James Anderson for a breezy 28, before bad light brought a premature end to play at 5.50pm with Kraigg Brathwaite (20no) and Shai Hope (3no) at the crease.

England began the day on 35-1 but lost 4-71 in the morning session as Gabriel and Holder – third in the Test bowling rankings and top of the pile for Test all-rounders – picked up a brace apiece.

Gabriel, who bowled Dom Sibley for a duck on day one, ripped out Joe Denly’s off stump with a 90.2 mph delivery and removed Rory Burns (30) lbw with a full ball as the opener wandered across his stumps. 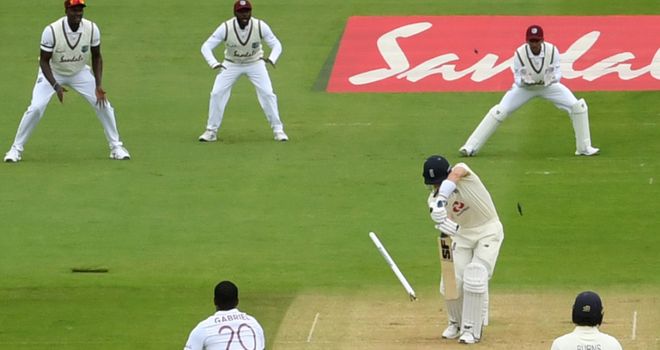 Burns was given out on review, as was Zak Crawley (10), whose chance to push his longer-term Test claims came undone as Holder drifted one in towards leg-stump.

It was the first time since the Edgbaston Test of 2017 against West Indies that all of England’s top four been dismissed either LBW or bowled.

With 20 minutes to go to lunch England found themselves 87-5 as Ollie Pope (12) feathered Holder behind and West Indies had another when Kemar Roach all but clung on to a Stokes top-edged hook when the all-rounder had 14.

Stokes gained a second life on 32 when Shamarh Brooks fluffed a straightforward chance off Roach and as the England skipper and Buttler plundered boundaries off Gabriel on their way to a fifty stand off 71 balls, the drops looked like they would prove costly. 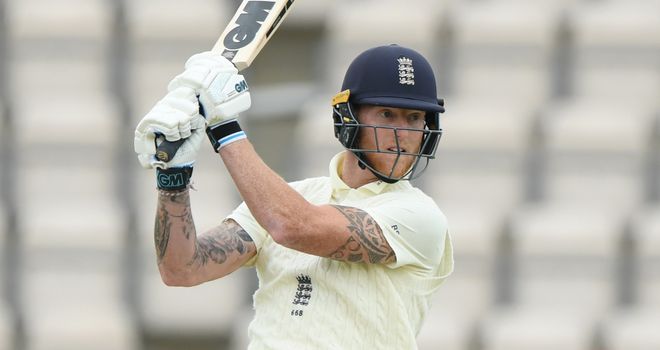 That they didn’t was tribute to Holder’s persistent line – the West Indies skipper picking off his opposite number as Stokes snicked behind, looking to work to leg across the line.

Three runs after the stand was broken, Buttler’s promising knock was ended by a Holder outswinger that found the edge and slapped into the centre of Shane Dowrich’s outstretched glove as the wicketkeeper dove to his right.

Holder clinched his seventh five-wicket haul by winning another DRS review, this time against Jofra Archer, and he surpassed his previous best figures of 6-59 – against Bangladesh in 2018 – when Hope caught Wood high to his left.

Dom Bess (31no) brought England’s 200 up in style as he back-cut Roach for four in the 67th over and hammered the next in front of point to the rope, but his cameo came to a close when Gabriel bowled Anderson (10).

West Indies’ openers negotiated an early break for bad light to put on 47 for the first wicket before Anderson – sharing the new ball with Archer – removed John Campbell (28), who successfully overturned two lbw decisions against him but not a third.

With the promise of far more favourable batting conditions to come in the remainder of the Test, Brathwaite and Hope safely negated England’s attack before the invading darkness convinced umpires Richard Illingworth and Richard Kettleborough to lift the bails.

Watch day three of the first #raisethebat Test between England and West Indies live on Sky Sports Cricket from 10.30am on Friday.