One of England’s stars of the World Cup has been injured after a brawl.

But coach Gareth Southgate needn’t worry as there is no police involvement with the incident only leaving Dave The Cat needing bandaging.

The cat adopted by the Three Lions at the World Cup hurt his paw in a catfight.

Dave The Cat was hurt brawling with another puss jealous at the attention he was getting from the players at their team hotel in Qatar. 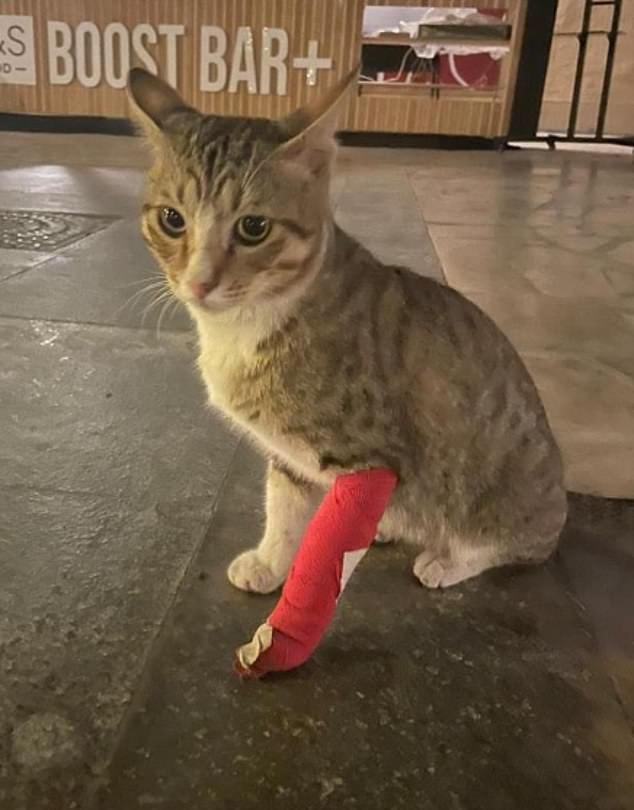 Dave The Cat is now sporting a red and white bandage to treat an abscess on his front paw. He has been given antibiotics and is expected to make a full recovery 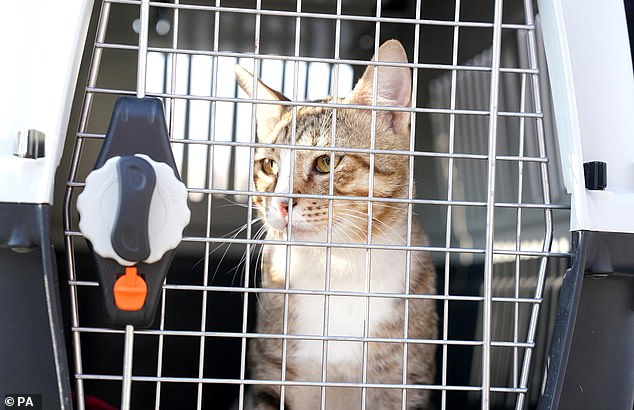 England players are arguing over who will become the cat’s owner on their return home. The pet will be well looked after, the FA confirmed, and if the players cannot decide a member of back room staff will care for the feline

His wound turned into an abscess.

But Dave – who is at the centre of a tug of love between several players who all want him to live with them – is on the road to recovery.

Vets have treated his wound, given him antibiotics to heal the abscess and wrapped the injury in a special bandage in England’s red and white colours to keep it clean while it heals.

Janet Berry, 58, who is caring for Dave at the Qatar Animal Welfare Society pending his transfer to England next year said: ‘He is an extremely sociable and loving cat.

‘But he got into a bit of trouble while he was in the England team hotel. He got into a fight and picked an injury on his front left paw.

‘I think another cat must have been jealous of the attention he was getting from the England team.

‘It developed into an abscess which needed treatment. He’s got an England bandage now and seems to love it.

‘His leg injury will be long healed and he’ll be fit to play again.’

Kyle Walker pledged to bring Dave home after falling in love with the stray when he started turning up for dinner with the players at the team’s hotel near Qatar capital Doha.

The loveable tabby became the team’s mascot and was given his own mini England shirt.

After the Lions’ defeat by France in the quarter-finals the players decided they still wanted to adopt him and arranged for local pet rescuers to start the transfer process.

This week the two-year-old domestic short hair has been microchipped, vaccinated, had the snip and had his injured leg treated.

Dave has been placed in temporary foster care ahead of a planned move to the UK in April following a spell in quarantine.

Janet added: ‘He is definitely coming home with England.

‘But precisely where he will end up is still undecided. So many of the players want him. 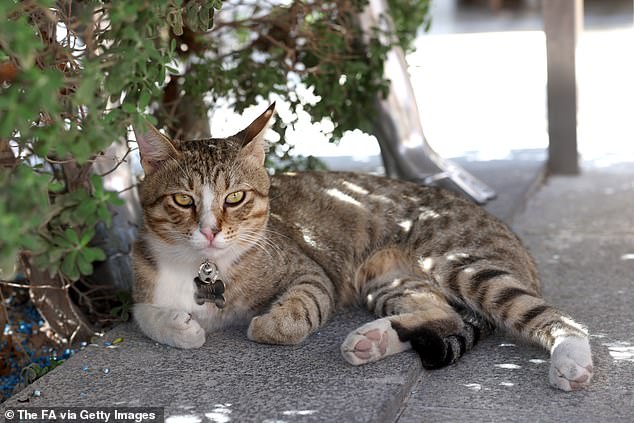 The cat was adopted by the team after joining them for meals in their hotel in Doha. He had an abscess from a wound but is now healing 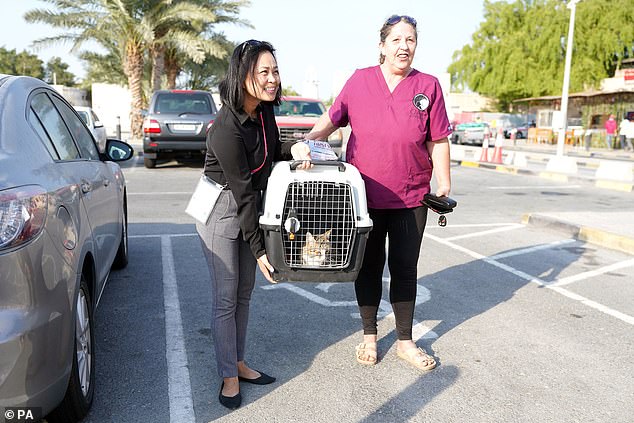 ‘They don’t have to make a decision right now because he cannot make a move until April in order to comply with UK laws.

‘By then he will be fit to fly and ready to move in.

‘The players will have to decide among themselves where he is going to live.

England’s Manchester City stars appear favourite to land the cat. Kyle, 32, has publicly declared his love for the puss.

But team mate John Stones, 28, gave him the name Dave and regularly fed him.

One player unlikely to take him in is Liverpool captain Jordan Henderson, 32, who is uncomfortable with cats and did not like them roaming around the Souq Al Wakra Hotel.

Janet said the England players were `incredible’ for adopting Dave and were ‘giving him life’.

She said: ‘Stray cats tend to hang out in the souq next to the hotel because it’s a place of safety.

‘Their life expectancy in Qatar is only around four at the most due to the traffic, lack of food and 50C plus heat in the summer. 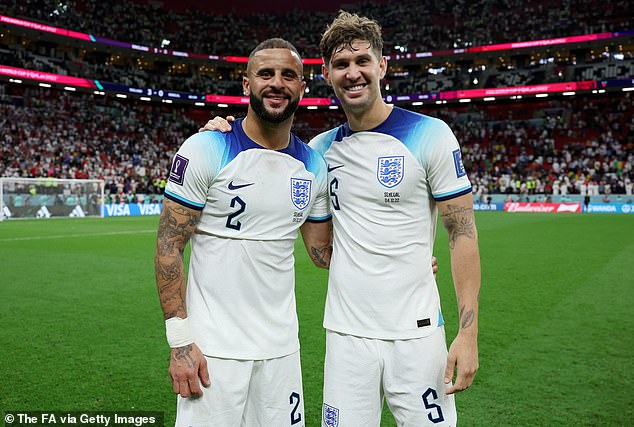 ‘Dave’s future would have been bleak here. But he could easily live to 25 with a safe home in the UK.

‘England’s players are really incredible. They are giving him life.

‘What a fantastic bunch they are to take time out from competing in the World Cup under all that pressure to care about a little tabby cat.

‘Having got to know him I’m not surprised. He’s very sociable and loves human company.

‘His nature makes him utterly adorable. I knew early on they would be taking him home. The England team contacted me to ensure I was there to rescue him when they left.

‘They have told me to do whatever is necessary to keep him happy and well until he can go to England.

‘He wasn’t too happy after the snip and stuck his tongue out at me. But now he spends his days curled up on the sofa watching TV.

‘Instead of scrounging for scraps in the souq he is eating the finest Royal Canin cat food.

‘If we’re not careful he will be the size of a bus when he arrives in England. He may need to go into training with the team.’

Dave will undergo a blood test in a month to check for signs of rabies and then, if clear, must wait another three months before he is deemed safe to travel.

A source close to the Three Lions said that if the players could not decide who will take Dave home, a member of the FA’s backroom staff will take care of the feline.