At her best, English would match up well with Redzel and In Her Time but Adrian Bott admits Saturday’s Doomben 10,000 is more about finding out if she is still in same league as The Everest-bound sprinters.

English finished mid-field in the first running of The Everest but as slots have been announced and contenders discussed, the five-year-old mare has not rated a mention. 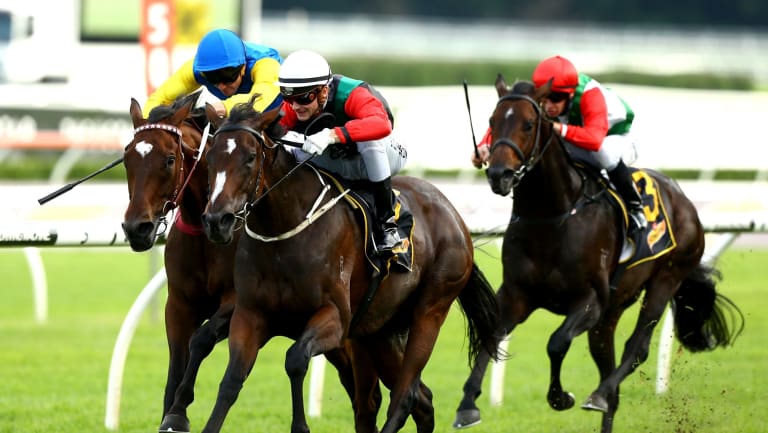 Long time between drinks: English wins her group 1 in the 2016 All Aged Stakes.

She hasn’t won for more than a year, with her best effort a runners-up behind In Her Time in the Galaxy during the Sydney autumn.

Since she ran mid-field without threatening in the TJ Smith, where Redzel and In Her Time filled the minor prizemoney behind Trapeze Artist. However a barrier trial win last week, a good barrier and prospect of a soft track has Bott’s confidence on the rise.

“She is in great shape. We really gave her a good sound out in the trial to see where she was at and we were happy with what we got,” Bott said.

“She has shown she is up with the best sprinters in the country time and again, and if you look at her run in the Galaxy, she was very good.

“She found the track a bit hard in the TJ but we think she is back to her best and if she is, she should be pretty close to Redzel and In Her Time. She is a very good mare on her day.”

Redzel and In Her Time dominate the betting for the Doomben 10,000 with The Everest winner the $2.30 favourite in front the Galaxy winner at $3.80 with Sportsbet. English is a $17 outsider but Bott believes that is value.

“She is probably better on soft ground these days as she showed in the Galaxy and if she can show she is up to this weight-for-age level there are a good group of races for her up in Brisbane,” Bott said. “She is already a 1400m group 1 winner and there are a few races at 1350m in coming up,  even the Stradbroke for her.

"There is also the option of dropping her back to mares company and aiming at the Tatt’s Tiara at the end of the carnival."

“He was very tough in the St Leger, leading all-the-way, so he will stay the trip,” Bott said. "He has got a bad gate but he will push forward."

Meanwhile, Kerrin McEvoy, who rides Redzel on Saturday, was suspended for nine days from the May 17 at Warwick Farm on Wednesday after failing to ride out favourite Galina for the final couple of strides when it ran fourth and was beaten by a short half-head.

“I got knocked down three times in the straight and got flustered and switched off,” McEvoy told stewards before pleading guilty. He will be back for the Queensland Oaks meeting on May 26.

Before the sentencing hearing for the Aquanita Eight on Thursday, Queensland Racing Integrity Commission approved the transfer six weekend runner from one of the convicted trainers, Liam Birchley to Toby Edmonds.