Swifts coach Briony Akle is clinging to the faint hope her side could still make the Super Netball finals after a draw with Collingwood yesterday.

The Swifts led with 20 seconds to go after a Helen Housby shot, but the Magpies found goal attack Erin Bell with seconds to play and her goal locked the scores. 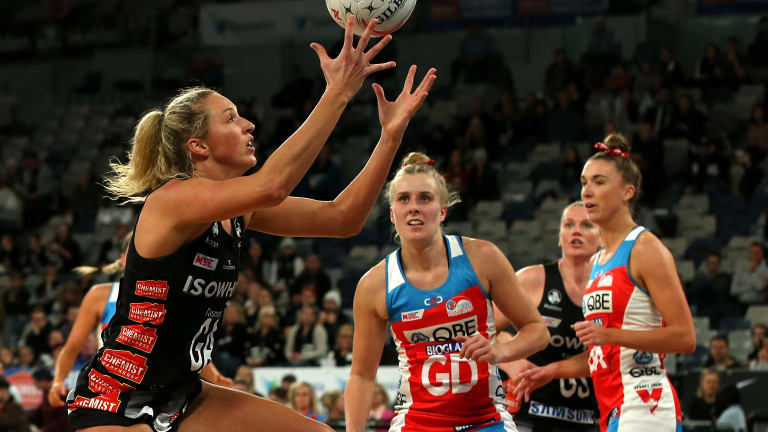 Crunch play: Erin Bell of the Magpies receives a pass against the Swifts. She tied the scores with just seconds left in the game.

The two clubs shared the game points and the bonus points, so took four each from the game.

Akle said her players would not give up hope but they need two wins from their remaining games and other results to go their way to have any chance of chasing down fourth.

“It’s better than a loss but it’s very frustrating and just patches of play let us down again so it’s back to basics again this week,” Akle said. “I think we are still there [in the finals race] but it will depend what happens in the other games.

“We will train and play like we are still there and it doesn’t really change what we are playing.”

The Swifts have battled to claim bonus points and get full value for their play this season. This game showed it as they gave up four-goal leads in the first and third terms.

“The good thing is that, in the past, we might have lost that game but the positive is if we stick together and learn we can take something out of it,” Akle said.

Bell has struggled to fit into the Magpies attack this season but she showed her quality in the final term, shooting 11 of 13. “It does help in the belief that we can [win],” Magpies coach Kristy Keppich-Birrell said. “Especially when you have someone like Erin taking that long bomb shot and it going in and being able to know when we wanted our goaler to have the shot so we could allow the draw to happen – that’s something we have done over and over again at training so it was good.”

Retiring star Sharni Layton started and played all four quarters at goal keeper. She came up with some big plays in the last term, although young Swifts shooter Sophie Garbin had her moments too, shooting 21 of 22 shots after coming on for the second half.

The Swifts looked poised to control the game after running out to a five-point lead in the opening term and holding a four-goal edge at quarter time. But the Magpies bounced back in the second term winning it 12-10 and cutting the visitors’ lead to 28-26 at half-time.

With the Swifts desperate for every point, they only just claimed the third-quarter bonus point when Magpies shooter Caitlin Thwaites saw her rushed attempt on the buzzer bounce out, giving the visitors a 16-15 edge for the term.

But the Swifts have struggled to maintain their best play this season and that problem appeared again in the final minutes as the Magpies came back.