They will say it was only Sweden, they will say England were indebted to goalkeeper Jordan Pickford with three quite brilliant saves, they will even say the nations in their other half of the quarter-final draw would all have won this tie comfortably but, frankly, who cares? Who really cares? 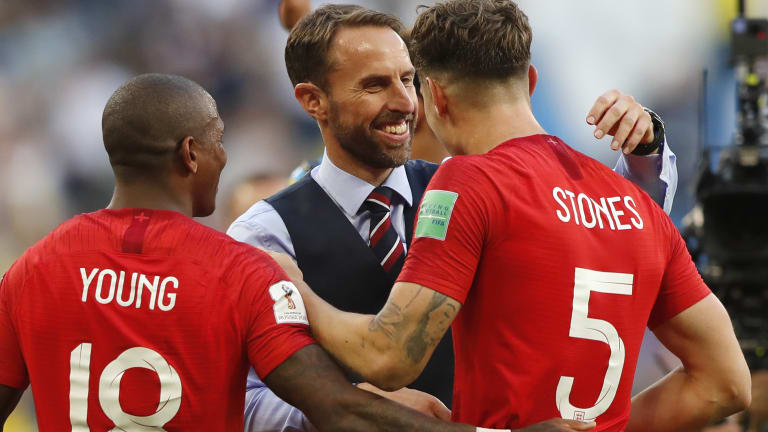 The unlikely reconnection is complete and the summer of 2018 will rank alongside those of 1990 and 1996, when semi-finals were reached, and maybe it has surpassed them already given how low expectation was and how high disenchantment had become in recent years and tournaments. A corner has been turned which, given the number of goals scored from corners, is pretty apt.

But can they go all the way? Can they bring it home as they did 52 years ago? England keep getting told they will have to play better but there are now only four countries who can be crowned world champions and they are one of them.

At the final whistle, Three Lions played and then, as a jubilant Gareth Southgate pumped the air in front of the England fans, there were The Beatles and All You Need is Love. And there is so much to love about this new England.

From Southgate to captain Harry Kane and throughout the squad with their own individual stories and their superbly coached approach and their never ending teamwork and desire to play for England and do so in the right way.

Like brothers, Kane said, and the band of brothers are heading for Moscow for at least one more game and maybe two with the final in the Russian capital on July 15.

The goals were scored by Harry Maguire and Dele Alli and both were well-worked thumping headers and those two also have wonderful stories to tell. But they were not alone in standing tall.

There was John Stones, now a leader in defence, there was Jordan Henderson, controlling midfield and there was Raheem Sterling who may have missed a golden chance but who stretched the Swedes when all they wanted to do was stay compact and grind this out to a closer finish. And there was Kieran Trippier who is a kind of English Cafu with a David Beckham delivery.

It was never going to be a classic. But it was a classic. The classic was what it meant and what it means the length and breadth of the country but even out here in Russia the sense of excitement can be felt.

And a sense of fun both on and off the pitch. As the clock ticked down England actually looked like they were enjoying it and there were grins as wide as the nearby River Volga as they consoled the Swedes and acknowledged their own relentless supporters.

England were the better team here by some distance and deserved the victory although there was little of the drama and tension of the penalty shoot-out win over Colombia in the last 16.

That, in itself, was another sign of progress. Sweden may be limited, effectively a team of spoilers with players from Hull City, Krasnador and Al Ain in the United Arab Emirates but they beat France and finished above Holland in qualifying, they defeated Italy in the play-off and they knocked out Germany in the group stages. That record speaks for itself.

So they were tough opponents and set out exactly what that meant at kick-off when they lined their players up on the left-hand side of the pitch and had no one down the right. It was like a rugby union match and the ball was launched in that direction with Sweden trying to slow it down, sit deep and draw any pace they could out of England's approach. 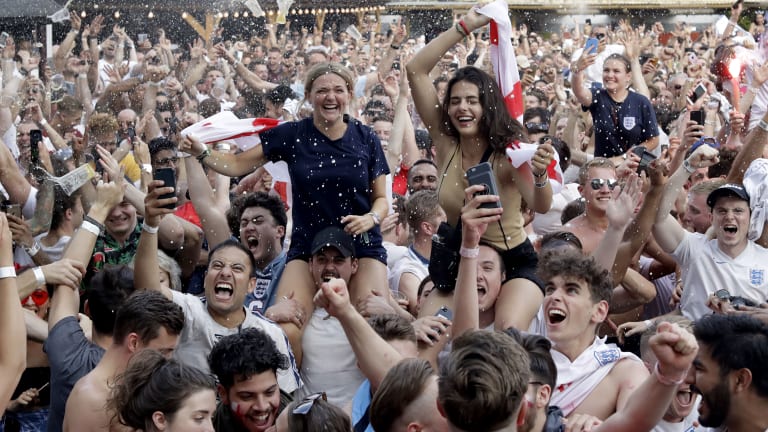 Coming home? England fans whoop it up in London after the match.

In a goalless opening half-hour it was hard work. England seemed nervous but finally profited from the familiarity of a corner routine – the eighth set-piece in fact from which they have scored at the World Cup. It came from a rare moment when they quickened the pace to earn that opportunity.

Ashley Young swung the corner in and the "love train" – of players lining up behind each other to stop themselves being blocked off – broke to create space for Maguire who proved too strong for his marker, Emil Forsberg. A meaty header nestled in the net with no Swedish defender covering the post.

Maguire had his first England goal and how they needed that.

Before half-time it should have been two but Sterling wasted a clear chance after being picked out by Henderson with a long ball forward which was nimbly taken down only for goalkeeper Robin Olsen to get a hand to it as he attempted to round him.

Even then it fell to Sterling although instead of teeing up Kane he decided to shoot with the ball deflected over by Andreas Granqvist.

The fear was England would pay the price but Pickford made the first of his hat-trick of saves as Sweden finally responded when Marcus Berg met a cross, above Young, and the goalkeeper dived to his left to push the header out one-handed.

It proved so important. Soon after and Trippier checked and played the ball inside to Jesse Lingard who crossed deep.

Alli, whose place had been under threat, drifted away from Emil Krafth and planted a firm header over the hands of Olsen.

Game over? Not quite. Pickford excelled again with another one-handed save to deny Viktor Claesson after he was set up by Berg with a smart flick into his path.

Even then Henderson threw himself to block the follow-up and, finally, Pickford tipped over a powerful rising shot on the turn from Berg to gain his first clean sheet and the first for England in a World Cup quarter-final. Another small record. And now a bigger one awaits.