France began dreaming of World Cup glory after a two-decade wait after Les Bleus defeated Belgium to reach the final, unleashing a wave of soccer euphoria across the country.

Delirious supporters draped in the Tricolor flag spilled on to Parisian boulevards as the blare of car horns reverberated through the French capital. In a fan zone outside City Hall on the banks of the River Seine, jubilant supporters embraced and lit smoke flares. 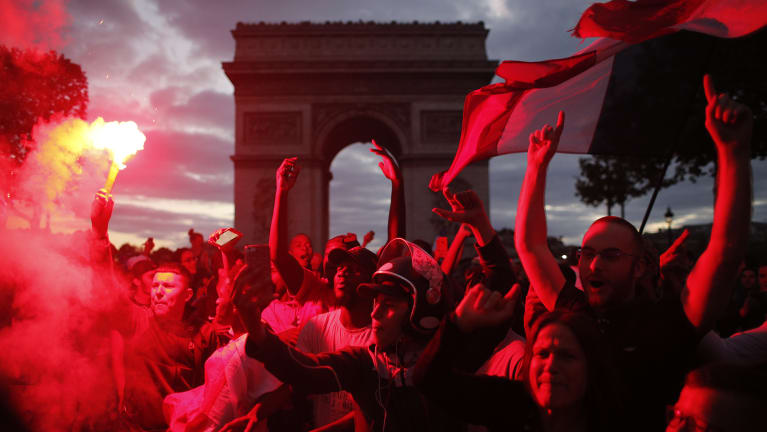 France supporters celebrate on the Champs-Elysees.

"I'm totally blown away, this is crazy," said 41-year-old Gilles Rove in Paris' Belleville neighbourhood. "Nobody believed this could happen at the beginning of the World Cup, but this team has really shown something in recent weeks.

"This team gives me goosebumps, even more so than the team of 1998," he added, in reference to the last time France won the World Cup, on home soil against Brazil 20 years ago.

The partying was marred by clashes between riot police and mobs on the iconic Champs-Elysees avenue. Live TV images showed bare-chested men hurling plastic crowd-control barriers and other missiles at the armed officers, who charged back.

In the southern city of Nice, more than two dozen fans were hurt when the detonation of firecrackers triggered a brief stampede near the seafront.

Hundreds of thousands of fans had poured on to the Champs Elysees and around the Arc de Triomphe as bars, cafes and restaurants enjoyed a bumper evening of revelry after the World Cup equivalent of a local derby between the neighbouring rivals.

Macron: "See you with the cup"

Some French fans were already looking forward to a possible final clash against long-time rivals England, who play Croatia in the second semi-final on Thursday.

"Our unfortunate Belgian cousins were just not quite good enough. But it was Europe which won, and it would be amusing if we were to beat the English," said 45-year-old Francois Garnier who watched the game near the Eiffel Tower.

In St Petersburg, ecstatic French fans sang their way out of the stadium, relishing the prospect of a final against England or Croatia.

Belgium fans filed quietly out of the arena, while back home they drowned their sorrows in beer after their dreams of a first World Cup final were shattered by their French neighbours.

"I feel ill," said Denis Backaert, 34, after watching France prevail 1-0 in the tightest of semi-finals between two quality teams in St Petersburg.

France won in front of President Emmanuel Macron, whose popularity has dropped in opinion polls and will be hoping for a World Cup bounce. The French leader went down to the players' dressing-room after the match.

Asked what Macron told the players, Les Bleus young forward Kylian Mbappe told TF1: "He said he would come back for the final, to see us with the cup."