OAKLAND, Calif. — There is no N.F.L. franchise quite like the Raiders and no scene quite like the one at their 52-year-old stadium on game days. In a league of 32 color-coded molds, the smoke-filled tailgate parties represent a vestige of original expression, described as something from a post-apocalyptic world.

In the morning haze of a recent Sunday, amid the maze of trucks, tents and barbecues, a man named Elias Sanchez talked about fandom as family. His 25 Raiders tattoos, some on his bald head, made him stand out only slightly in the crowd.

Yet part they will. The Raiders, who do not have a home for 2019, could be playing their final game in Oakland on Monday night as part of the team’s sadistic, slow-motion departure for Las Vegas in 2020.

Any hope for a grand finale under once-and-again Coach Jon Gruden faded with a numbing series of losses (the team is 3-11) and the realization, after the Raiders traded two top players for future draft picks, that Oakland was being stepped on, like a springboard.

Gruden, with his 10-year, $100-million contract, was brought back not to revive the Oakland Raiders but to launch the Las Vegas Raiders.

“You got family,” Sanchez said, landing on a metaphor that the outside world might understand. “Say your family moves to Chicago. You’re still going to love your family, right? It’s not about a city. It’s about a nation.”

The resolve of Raider Nation is being tested like never before. In Oakland, insults have been backing up like East Bay traffic.

Things got so weird the past couple of weeks that the firing of General Manager Reggie McKenzie barely registered. The city of Oakland filed a federal antitrust lawsuit against the Raiders and the N.F.L., taking aim at the league’s relocation protocol, which mostly makes other team owners rich.

The Raiders, in turn, said they would not renew their lease at the Oakland Coliseum for 2019 if they were being sued.

That leaves the team homeless, for now, beyond Monday night.

“Hopefully we get it all resolved where we can continue to play here,” Gruden said last week.

Ideas are being bounced around like the Holy Roller fumble, suggesting the Raiders could play anywhere from San Diego to San Antonio, Reno to Fresno. Maybe they will play at Stanford or Cal, or join the 49ers at Levi’s Stadium in Santa Clara (where the Raiders declined to consider a permanent arrangement years ago). Even AT&T Park, home of baseball’s Giants, is considered a possibility.

The Onion chimed in, satirically reporting that the Raiders will play next season in Gruden’s backyard. 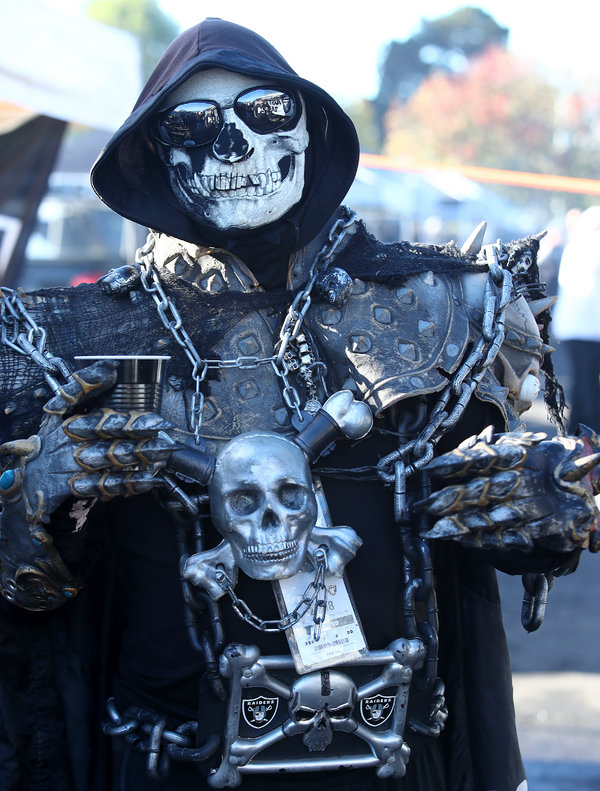 The league said that the Raiders need to figure out where they will play home games quickly, so it can make the 2019 schedule. (Always the sensitive type, the N.F.L. announced amid the recent scuttlebutt that the 2020 draft would be in Las Vegas, setting a welcome party for the Raiders.)

In hindsight, it was an absurd idea that the Raiders tried to pull off: Announce that you’re moving the team, breaking up with the hometown fans, but not for two or three years.

“There was zero logic,” said Andy Dolich, a former top executive for other Bay Area teams, such as the 49ers, Oakland A’s and Golden State Warriors. “‘Honey, we’ve been together for 40-some years. I want a divorce, but I’m going to hang around. You don’t mind much, do you?’”

What could go wrong — especially in Oakland, where things with the Raiders have a habit of going wrong?

The Raiders left Oakland once before, for Los Angeles in 1982. They returned to the Oakland-Alameda County Coliseum in 1995, but nothing ever felt permanent with the franchise.

Their biggest flirtations were with Los Angeles, again — a dormant market that suddenly had too many suitors. In 2016, the Rams made the winning pitch to return to Los Angeles, after two decades in St. Louis. The San Diego Chargers wiggled ahead of the Raiders to join the Rams in their new stadium.

Both the Rams and the Chargers moved immediately to temporary homes in Los Angeles (their stadium is set to open in 2020) as the Raiders turned to Las Vegas. After a few hiccups, the N.F.L. approved a move in March 2017.

One wrinkle: The Raiders would not leave Oakland immediately. They would be the lamest of ducks, living with their jilted fan base in a fittingly macabre countdown at the Coliseum.

Few blame the Raiders for taking the deal in Las Vegas. With $750 million in public funds for the stadium, it was too good to pass up, especially given the pervading uncertainty in Oakland.

But if the Raiders thought they could stick around Oakland for two or three years of celebratory send-off, they were wrong, mostly.

Affectionately called Chucky for his resemblance to the horror-film doll, Gruden coached the team from 1998 to 2001, leading it to double-digit win totals his last two seasons. The 2002 Raiders lost the Super Bowl to Gruden’s Tampa Bay Buccaneers, and the Raiders collapsed into irrelevance. They went through nine coaches and one playoff game before Gruden was hired again.

Gruden was seen as a sturdy bridge between two places and times. He could recharge the Oakland fan base while exciting those in Las Vegas.

Instead, Oakland feels a bit like football purgatory, a last stop of suffering before the promise of bright lights. Just before the season, the Raiders traded linebacker Khalil Mack, the league’s defensive player of the year in 2016, to the Chicago Bears. Mack has more sacks this season (12.5) than the Raiders (12.0).

The Raiders lost four of their first five games, then traded the top receiver Amari Cooper. He had 44 catches and six touchdowns in his first seven games with the Dallas Cowboys.

(Adding to the recent weirdness: conflicting reports about who made the trades — Gruden, the now-departed McKenzie or the team owner Mark Davis.)

The moves gave the Raiders a lode of future draft choices, including three first-rounders next year. A strategy has crystallized: Flip one of the league’s oldest rosters into one of its youngest.

The Raiders are likely to start six rookies on offense and defense Monday, plus a rookie punter, kicker, holder and long snapper. Only 15 players on the current 53-man roster were part of the team last year.

“I’m optimistic for the next 10 years,” said Timothy McVey, a longtime fan tossing a football before the most recent home game, against the Pittsburgh Steelers. “I just wish they were staying here so we could see the rewards of it.”

In the stadium (sold out, officially), the Raiders faithful saw an unusual number of Steelers fans. But they felt the familiar fervor as the Raiders came back to take a late lead, then blocked a field goal to win — draft position be damned. Gruden celebrated with the costumed characters in the Black Hole.

It is hard to imagine any of the scene at the Oakland Coliseum being replicated in Las Vegas. Even fans from Las Vegas see that.

“I was 100 percent for them to stay in Oakland,” said Thomas Littlejohn, who flies to Raiders home games. “I believe the soul of the Raiders is the city of Oakland, and I’m scared to death they will lose that soul.”

First things first. There is at least one more game to play in Oakland, on Monday night. Appropriately, it is against the Denver Broncos, Oakland’s longtime rivals dating to 1960 and the American Football League.

There is a bit of anxiety about what the night might bring — the usual revelry, sure, but perhaps some emotion-driven, darkness-fueled marauding and pillaging. These are the Raiders, after all. Autumn winds and all that.

“I expect this to be a great atmosphere, probably the best we ever had,” quarterback Derek Carr said at team headquarters on Thursday, adding: “They’re the most loyal fans any sport, any team has to offer. They’ll get our attention somehow, there’s no doubt about that.”

And once it is over in Oakland on Monday night, maybe it is truly over. Or maybe not. The team is not treating this game as anything final, or even unusual. Just another home finale, even if no one knows where home is come Tuesday morning.

“In a perfect world, we would have Gruden back, we’d be staying in Oakland, building a stadium right next door, with three draft picks in the first round next year,” said Jim Zelinski, co-founder of a fan group called Save Oakland Sports. “That’s the fantasy.”

He paused, letting reality sink back in.

“Instead, what an ignominious end, right?” he said. “To have to go out like this?”