But Tottenham ended the window as the only club not to bring in a new player while Manchester United were unable to bring in the central defender they were reported to be keen to recruit. 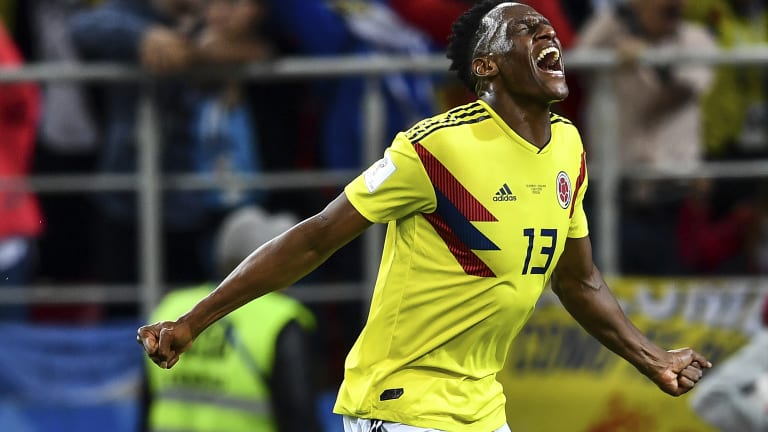 Late move: Barcelona defender Yerry Mina, who starred at the World Cup for Colombia, is off to Everton.

Playmaker Bernard arrived on a free transfer after his contract ended with the Ukrainian club while Barcelona said Everton had agreed to sign centre back Mina for an initial 30.3 million euros ($47m) and have taken midfielder Gomes on loan.

The fee for Mina, who only joined the Spanish champions in January, could rise by 1.5 million euros and Barcelona have inserted a buy-back clause in the player's contract.

The Merseyside club, who appointed Portuguese manager Marco Silva during the off-season, could add a fourth deadline day signing after the Liverpool Echo reported they had submitted a deal sheet in the hope of completing paperwork for a loan for Chelsea centre half Kurt Zouma.

Tottenham had been keen to bring in Aston Villa's 22-year-old midfielder Jack Grealish but were reported to have had a £25m offer rejected by the Championship club.

United had been linked with a number of central defenders including Bayern Munich's Jerome Boateng, Leicester City's Harry Maguire and Tottenham's Toby Alderweireld but head into the campaign without any addition in that area.

Promoted Fulham signed Spanish goalkeeper Sergio Rico on a season-long loan deal from Sevilla and were reported to be hoping to complete last-minute paperwork on a deal for Marseille midfielder Andre-Frank Anguissa and Manchester United's young defender Timothy Fosu-Mensah.

West Ham took their total of summer signings to nine as Spanish striker Lucas Perez was brought in from Arsenal and Colombian midfielder Carlos Sanchez joined from Serie A club Fiorentina.

Southampton struck an agreement to sign striker Danny Ings from Liverpool on an initial loan deal.

"There was significant competition for Danny, with a lot of clubs keen to complete a deal for him, so we're clearly delighted that he chose to join us," manager Mark Hughes said.

The transfer window remains open in Spain until the end of August and closes in Italy on August 17.