The two Sharkies supporters sitting a few rows down from the outside press area at Southern Cross Group Stadium sum up exactly what’s wrong with this game right now.

They sum up the frustration, the anger, the perpetual debate about referees and the superiors above them.Their side triumphed 22-16 against the Bulldogs — its fifth in a row to leapfrog the Storm, Roosters and Wests Tigers to land in fifth place. 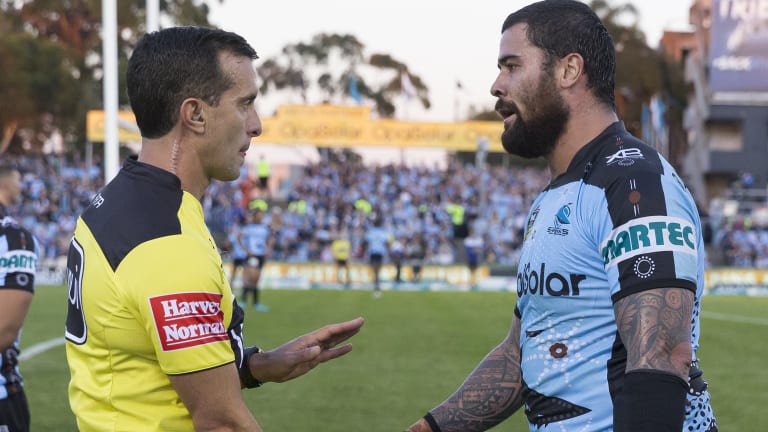 Sharks replacement hooker James Segeyaro owns a streetwear company with Corey Norman and Issac John called YKTR, which stands for “You Know The Rules”. I’m starting to wonder if anyone does. I wonder if I do. If the refs do. I know the two Sharks fans don’t.

The first decision they detonated about was the 44th-minute call from The Bunker to disallow a try to hooker Jayden Brailey after Bulldogs fullback Moses Mbye had foolishly passed to five-eighth Matt Frawley close to his own line and beed pushed back into his own in-goal.

One of the two Sharks fans was still complaining four minutes later as centre Jesse Ramien busted through six defenders close to line to edge his side out to a 16-10 lead. Seriously.

The second decision the refs got right but the two Sharkies fans blew up about came late in the game when their side came tearing down the left. The ball came inside to Joseph Paulo, who dropped it, then kicked it with the back of his heel. Valentine Holmes pounced on it and looked like he had scored.

The ruling was “no try”. Knock-on. Right call. 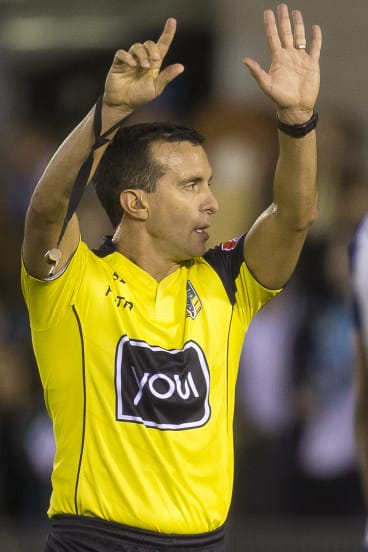 “WHAT ABOUT THE SLATER DROP KICK?!” screamed both of the Sharkies fans in unison, referring to the incident last month when the Storm fullback dropped it close to the line yet the try was still given because of some magical drop-kick rule that suddenly emerged from the rule book.

Rugby league fans can whinge for Australia. So, too, former players. And don’t even get me started on journos. But this is the current crisis of confidence we have in the people officiating the NRL.

So let’s stop talking about the refs and use these valuable remaining words on the match.

It came down to a matter of inches, really, with unfashionable prop Matt Prior reaching out in the 67th minute to put the ball down to extend his side’s lead out to 22-14.

Soon after, Bulldogs five-eighth Kieran Foran did something he doesn’t do enough of these days — take on the line — and when he did late in the game he broke the line.

He reached out, desperate to score the four-pointer that would give his team a sniff. Replays showed he was a bee’s appendage short. 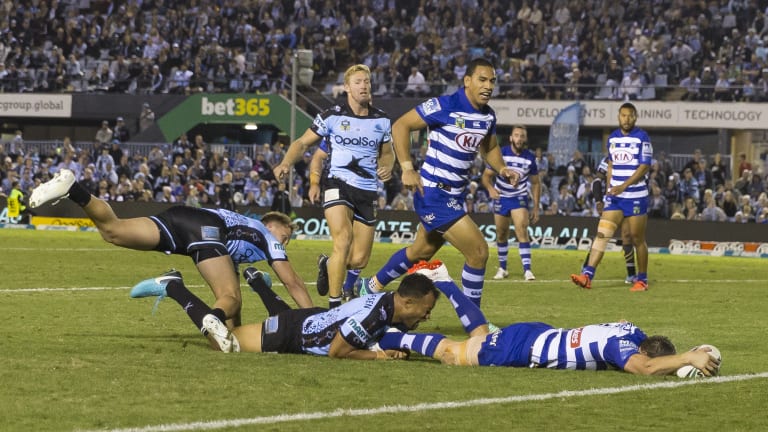 That’s when Bulldogs coach Dean Pay went another shade of grey sitting in the coach’s box. He’s a rookie coach, in charge of a roster exploding at its salary cap seams, and has a long road ahead in the next three or four years if he’s to survive.

Afterwards, he could’ve adopted the same mindset as the two Sharkies fans. He did that in the loss to Brisbane two weeks ago and was heavily fined.

Indeed, in the second half, Mbye was taken out in support with the Bulldogs on the attack. In this round seemingly commemorating the “sin bin”, it warranted a sin bin as much as anything we’ve seen but it didn’t come.

The sin bin is harder to pick than the shrill of the referees whistle, sometimes coming when you least expect and sometimes put away when it needs to be used.

“We started both halves [of football] with five-nil penalties on each side,” Pay said. “We have to be smarter and better at what we’re doing. We’ve just got to be better. We can’t come in here and blame that. We have to take some ownership in how the games are going. We just can’t keep doing that an expect to win footy games.”

By the time he said it, the two Sharkies fans were long gone, probably across the road to the Leagues Club to discuss where the refs had got it so wrong, and they were so right.