Hands up if you had netball withdrawals last weekend. Yep, me too.

It was weird having a weekend without massive collisions, nail-biting finishes and silky skills on show everywhere you look. I mean, I love footy – of all sorts – but it's not the same. I need more excitement. 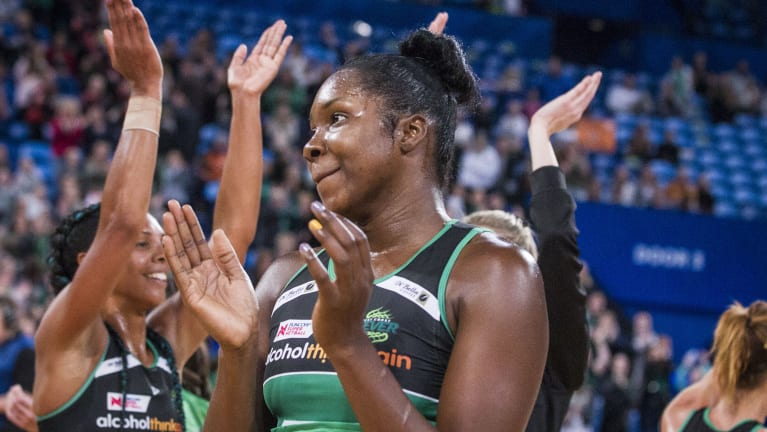 Jhaniele Fowler and West Coast Fever are sure things for the top four.

Happily, normal transmission resumes this weekend, with the players of Suncorp Super Netball back bigger than ever after the bye weekend to resume hostilities this week.

With this next round marking the halfway point of the season, it's worthwhile assessing how the season is panning out and trying to figure out what's in store for us in the second half of the season.

At the start of the year I tipped a Giants-Collingwood grand final, with the top four to be made up of, in no particular order, the Giants, Magpies, Sunshine Coast and West Coast.

While this season has been difficult to pick accurately – to be honest, my tipping has been rubbish – I reckon the top four is going to look a bit different to my initial thoughts.

Fever is the only team I am prepared to say will definitely be there, although the Giants aren't far off. Both are playing at an intensity that is consistently higher than everyone else in the competition. It doesn't mean they aren't beatable, but it does mean they are the two teams who are producing the goods week in week out.

Fever, in particular, have been impressive because they have proved they are so much more than one-trick ponies. Sure, the signing of towering goal shooter Jhaniele Fowler gives them a potency in attack that's hard to rival, but in order to make the most of it they need to win ball in defence and then get it to the other end. That they have consistently done this gets lost in the focus on Fowler's record-breaking shooting, but make no mistake, Fever have stepped it up all over the court this year.

That is borne out by the numbers. Champion Data have ranked each player in the competition based on their statistics, and it's no surprise that Fever have six players who rank in the top three players in their preferred position across the league. This is twice as much as any other side.

The next best are a clutch of teams – Lightning, Giants, Melbourne Vixens and Queensland Firebirds – all of whom have three players apiece who are dominating their positions. Of the three remaining teams, Magpies have two, the NSW Swifts have one and Adelaide Thunderbirds have none. Of these teams, Thunderbirds are the only ones I am prepared to write off as finals contenders, given they are yet to have a win this season.

Assuming Fever and Giants make the final four, it's a matter of squeezing five teams into the remaining two spots.

My gut feel is that Lightning are going to be in the hunt with Firebirds and Swifts in a scrap for the last finals spot. Having said that, I have consistently underestimated Vixens over the past couple of seasons, which has a tendency to bite me. Although this year I don't think they have the firepower to push them into the top four. Tegan Philip and Kate Moloney aren't dominating like they did last year and that is hurting them.

I really would like to see the Magpies move into finals contention – if only to prove my early grand final tip right – but despite much being made of their dominant win over the Firebirds last round, I am not sure it is enough to build a season on. I need to see that intensity and connection more than once to be convinced.

Of course, once we are into finals it is anyone's game, although I suspect a Fever v Giants grand final would be one for the ages, given that their round-six clash had all the intensity and drama of a season-decider.